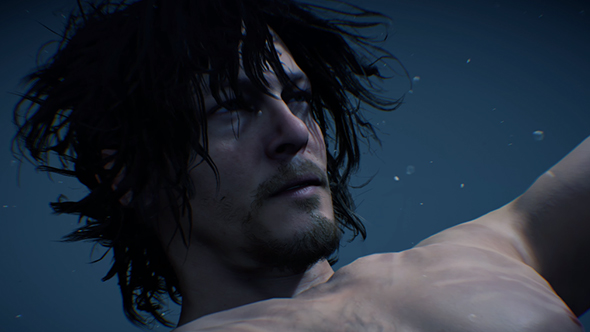 Death Stranding got a new trailer at The Game Awards, and it’s more than just a bit of free association with Lovecraftian monsters and weird, baby-driven future tech. At least it is according to director Hideo Kojima, who gave some context for the trailer’s events in a new interview.

“One of the themes of this game is life and death,” Kojima tells IGN. “So I want people to realize that when they die in the game, that isn’t the end.” Instead, dying takes you to an underwater purgatory – the very one you see Norman Reedus floating around in just before the reveal of the internet’s new favorite son, throat baby.

When you die, you’ll be sent to this underwater location, which you can then explore in first-person as a spirit, recovering lost items and other things. Kojima says this is his attempt to get away from the old school death mechanic that has been around since arcades, which was designed to suck quarters and hasn’t evolved much sense. When you’re in that underwater state, “you’re not dead or alive. It’s the equivalent of that screen that says ‘Continue?’ and a counter ticking down towards zero.”

Your lives and deaths will have persistence in the game world, so when you return to your body you’ll be back in a world that recognizes your prior defeat. Kojima says “death will never pull you out of the game.”

The Game Awards trailer is chronologically the earliest part of Death Stranding we’ve seen so far, taking place just after the prologue and before either of the previous trailers. The baby which has appeared throughout these videos is the same little guy throughout, and he’s more than just a memeable story presence. Both the baby and clackity mechanical arm have some sort of gameplay presence, but Kojima’s not revealing what just yet.

It is indeed the rain that causes the sudden aging we see in that trailer. Apparently this bit of weather is called Timefall, and it affects people, animals, and plants all alike. It’s one more piece of the Death Stranding puzzle, and Kojima promises it’s not all mysteries and surrealistic nonsense. “Everything makes sense,” says Kojima. “Everything will come together.”