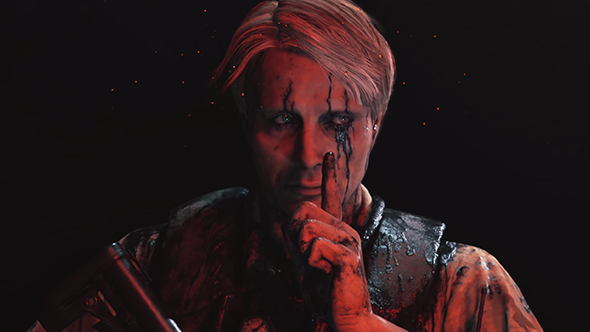 We’ve seen a lot from Death Stranding – whether that be Lovecraftian monsters, throat babies, or Norman Reedus’s butt – though the precise nature of anything regarding how the game plays remains a mystery. One of the game’s stars, Mads Mikkelsen, just dropped big hint about the nature of the game, though as with most of the early teases it’s only served to deepen the intrigue.

“The whole concept of playing the game,” Mikkelsen tells Total Film magazine, “as I understand, needs collaboration from different people from different parts of the world, which is also another level of fantastic-ness.”

Yes, we’re still hopeful about Death Stranding coming to PC. Check out all the other upcoming PC games.

Much like all our pre-release info about Death Stranding, we’re left to wonder what it all means. The obvious interpretation is that Mikkelsen’s referring to some sort of multiplayer component. Kojima played with an asymmetric base defense system in Metal Gear Solid V, one which challenged players to a worldwide meta goal of achieving worldwide nuclear disarmament in-game – a goal which still hasn’t been achieved, despite some apparent technical hiccups triggering the accompanying cutscene early on PC.

In an IGN interview last December, Kojima said multiplayer is “one big part of the game I can’t talk too much about, but I definitely want to try something different for online.” Though whatever the specifics, don’t expect an overwhelming emphasis on the online. “I think there are a lot of people out there who still enjoy single-player games, aside from some microtransactions,” he added.

Of course, Mikkelsen’s quote in that interview – available from GamesRadar – could also refer to the broader themes and story elements of the game. We know Death Stranding has a heavy focus on the connections between people, both in the metaphoric sense and the literal, what with all the umbilical cords laying around all the game’s trailers.

Mikkelsen also describes the particular challenges of going through mocap for the game. Kojima “tries to explain it again and again and again, and I thought I had it, but then this happens and I’ve lost it again. It’s too complicated. It’s too crazy. It’s too beautiful. It felt a bit like being in drama school: ‘Just jump in and improvise this scene. This is what happens. Don’t question it’.”

We’ll likely see something else that will confuse us in just a few weeks, because E3 is almost here.