Before we move on, it’s really important we flag the rather obvious – there are a lot of Death Stranding story spoilers below. Despite its ostensibly convoluted nature, however, the narrative really does come full circle by the end of the game, its knots neatly tied into intricate little loops. Like any good tale, its ending is what ultimately defines the overall structure, where details are uncovered by forward progression but only truly understood in retrospect. Here’s what the Death Stranding ending actually tells us about its story as a whole.

Sam Porter Bridges had an unusual infancy. He already knew that he met Amelie on the beach, and was raised by UCA (United Cities of America) President Bridget Strand as if he were her own son. However, he never truly knew anything about his birth – or, perhaps more importantly, his second birth.

Oh, and just one more time for good measure, there are whopping Death Stranding story spoilers below. We definitely told you so.

What happens at the end of Death Stranding?

Over the course of the story, it gradually becomes clear that the man Sam is repeatedly forced to fight in dream sequences – Clifford Unger, portrayed by Danish actor Mads Mikkelsen – is actually his father. Mads confuses Sam’s BB (bridge baby) for the one that was stolen from him years beforehand, but the connection he feels — the connection that ultimately ties him to this world even after death – is actually to Sam himself.

You see, a lot happened before Bridget Strand adopted baby Sam. Clifford was temporarily residing in a Bridges facility while his wife was on life support. His son – Sam – was being used as a subject for the new, highly confidential BB program, which was an innovative, if not entirely inhumane, experiment designed to aid in detecting Death Stranding BTs, or Beached Things. When Clifford realised that his BB was going to be taken away from him forever, he jumped at an opportunity to escape offered to him by Die-Hardman, a soldier who previously served under him when he commanded a war squadron.

The escape doesn’t pan out, and Clifford is shot dead after Bridget Strand pulls the trigger on a gun Die-Hardman couldn’t fire. Unfortunately for Bridget, Clifford’s BB – the ‘equipment’ they were trying to retrieve in the first place – perishes after being struck by the same bullet. Delirious, Bridget does everything in her power to save young Sam. And that’s when she brings him to The Beach. 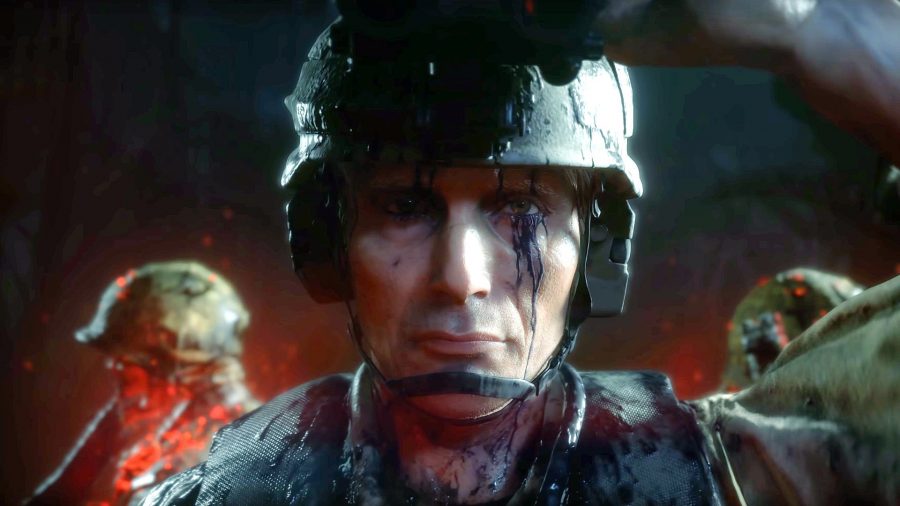 A world between the living and the dead, everyone has a Beach, according to Guillermo Del Toro’s Deadman. Things work differently on The Beach: hours might pass there while only moments transpire in the real world. One small step on the sand translates to one giant leap back on Earth. And apparently Bridget Strand has a whole range of powerful abilities so long as she’s safe on The Beach’s soulless shores. In fact, she manages to resuscitate Sam here, instigating his second birth, this time born to a world that is not our own.

This begets Sam’s curious identity as a repatriate, meaning that he is incapable of dying. Instead, when Sam is ‘killed’ by an adversary, he is involuntarily sent to an area known as The Seam, where he need only swim to his lifeless body in order to be reborn again in the land of the living. It also explains Sam’s DOOMS abilities, which allow him to interact with chiral matter in a way no ordinary human can.

So Sam is reborn with newfound abilities and grows up believing that Bridget Strand is his mother and Amelie, her daughter, is his sister. On the contrary, Amelie and Bridget are one and the same. When Bridget brings Sam to the beach, her soul (ka) remains there and becomes Amelie. Meanwhile, her body (ha) returns to Earth and is subjected to the usual cruelties of corporeal existence. Bridget begins to age on earth while Amelie remains youthful, nigh immortal on the beach. And when Bridget passes away before setting Sam the task of returning to Amelie, the latter stays alive, but is forced to live out her days imprisoned on The Beach.

This is where things get especially complicated. Although Amelie is presented as Sam’s primary reason for travelling across America in the first place, she is secretly the antagonistic force pulling the strings behind Death Stranding’s more ostensible baddies. Higgs, portrayed by Troy Baker, may appear to be the villain early on, but he started out as little more than a pawn of Amelie’s. Although he eventually uses the powers she bestowed upon him for his own personal gain, he is ultimately a puppet that learned how to pull his own strings. And when you inevitably face him for the final time, defeating him frees Amelie from his villainous clutches, and allows you to fully understand the Death Stranding for the first time.

Amelie is an Extinction Entity (EE), which means that she is destined to bring about the apocalypse – or at least the end of humanity. There have been five EEs in the past, each one wiping out an entire species, and the sixth is both inevitable and necessary, according to Amelie.

However, Sam is able to use his bond – perhaps Kojima would prefer ‘strand’ – with Amelie to ensure that she doesn’t follow through. While Amelie hands him a gun and tells him to do what he must, shooting Amelie only triggers a fail state where she actually does instigate the end of the world – so this isn’t really a true ending to the game. On the contrary, giving her a hug causes her to question herself, and convinces her to live an eternity in isolation on The Beach instead condemning humanity at large to death. Hugging Amelie is the only way to progress and see the true Death Stranding ending.

So! Sam is Clifford Unger’s baby, but grew up believing he was Bridget Strand’s. He was killed as a child, but was reborn on The Beach, granting him special abilities. He eventually learns that he is Clifford’s son after killing him several times on a stray Beach in his dreams, and eventually learns that the woman he thought was his mother is, in fact, also the woman he thought was his sister. By giving her a hug instead of shooting her in the head, he convinces her not to destroy the world, and thus can return to Earth where humanity has not gone extinct.

That’s the general gist. As for Sam’s own BB, you’ll have to play it to find out. That’s far too good a surprise to spoil.