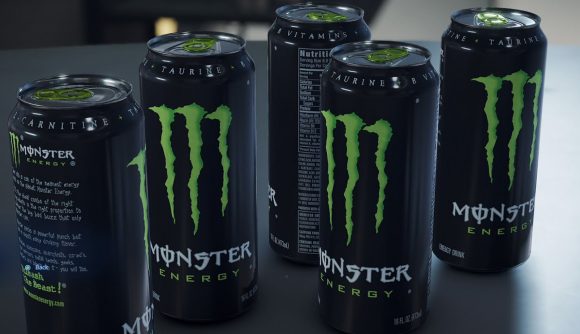 I played roughly 20 hours of Death Stranding over the weekend. During that period, I also purchased a Monster Energy drink for the first time in years. Apparently, I’m not the only one who’s been suckered in by the game’s completely unsubtle product placement, as Monster’s stock rose mightily on November 8 – the very same day Death Stranding released on PlayStation 4.

Monster stock closed at high of 58.16 on the Friday of Death Stranding’s launch, as noted on the game’s subreddit (via USgamer). That’s the stock’s highest price in over a month. Coincidence? I don’t know, but I have played enough Death Stranding to know everything’s brought together by strands, so this must be connected.

There is a lot of Monster in Death Stranding. Every time protagonist Sam Bridges enters a safe house, you’ll find five lovingly-rendered cans of Monster sitting on a table. You’ll likely want to drink precisely three of them for a stamina bonus, and to enjoy the animation of Norman Reedus nearly falling over chugging the beverage.

Not only that, you’re equipped with a canteen that automatically converts water into Monster. Death Stranding is set in a world where we’ve given up hydrating with water in favour of energy drinks. If Monster’s stock continues to rise, maybe this feature will soon be upon us.

If you want to know how to deal with the game’s other monsters, check out our guide to Death Stranding BTs. There’s plenty of time left before the Death Stranding PC release date, but you can follow that link for details on what to expect as the game transitions away from PS4 next year.