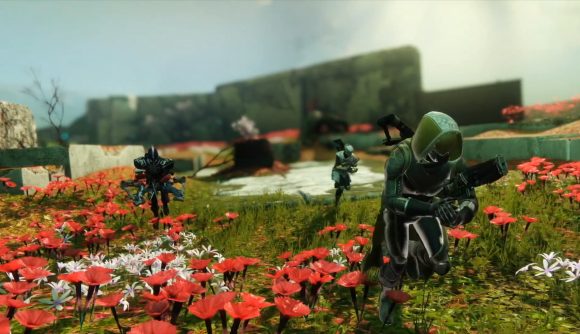 June 6, 2019 Cross-save is coming to Destiny 2 across every platform.

Destiny 2 is getting cross-save support, and it’s coming across all platforms. That includes PC, Google Stadia, Xbox One, and – crucially – PlayStation 4. The feature’s announcement leaked early, but sources were uncertain about whether Sony was on board – now it seems they are. This news is on top of all the other details on Destiny 2: Shadowkeep and its annual pass.

Cross-save will launch alongside Shadowkeep on September 17. On that date, the game is also going to Steam, and that’ll be the only place on PC to get the new expansion – all your progress and purchases will transfer straight over from Battle.net. Additionally, platform-exclusive content is coming to an end.

Bungie always wanted cross-save in the game, but as Mark Noseworthy says, “we couldnt get there for capital ‘R’ reasons.” Bungie had a few jokes to make about the leaks during the stream, and the implication was that the final decision from Sony came in pretty late. According to a report from Jason Schreier at Kotaku, Sony only okayed the feature for PlayStation 4 players yesterday.

Cross-save is huge news for Destiny. As a live game with heaps to do across three character classes, keeping up is hard enough without being stuck on one platform which may or may not be available when traveling.

The Destiny experience has also been painfully fragmented across platforms, and cross-save gives hope of reunification. Since its inception Destiny has had an exclusive content deal with Sony, locking some very cool guns, strikes, and armour sets behind a one-year PlayStation exclusivity deal, and royally pissing off most of the community in so doing. Now that’s coming to an end.

For every confirmed update: Here’s what’s next in Destiny 2

Then there’s the question of your characters and their legacy acrosss games. Destiny 1 wasn’t on PC, so I put hundreds of hours into a PlayStation 4 character before jumping to PC for the sequel. All players lost their loot from the first game, but if you stuck with the same platform, the sequel would recognise your past experience through a personalised intro sequence and changing voice lines. It’s galling having The Taken explained to my character when, in my head, he’s the same Warlock who killed Oryx himself many times over. Now it seems this will no longer be a concern.