With Destiny 2’s PC beta less than a week away, Blizzard let Bungie use their stage at Gamescom to speak to the players they’re inviting into their world. Bungie brought new footage of the European Dead Zone (EDZ) on Earth, where the campaign begins – here’s what we saw.

Not sure where the EDZ is? Find out in our Destiny 2 worlds and planets guide.

We’ve learned more about Devrim Kay, one of the characters who will guide us through the EDZ, of whom we’ve only heard hints so far. His voice actor also spoke for Final Fantasy XII’s Balthier, which is nice, if you’ve played that game on console.

As expected, he’s a sniper, and you’ll find him in the upper floors of an abandoned church. He has a reputation system like the factions in the original game – you’ll rank up with him through certain items, and you’ll get rewards at each rank.

These include legendary ‘EDZ Engrams’, which indicate their power level before you claim them in a potentially neat change from Destiny 1. In that game, an item’s power level was calculated when you claimed it, and since it derived from the power level of your currently equipped items, it wasn’t necessarily an improvement if you’d forgotten to wear your highest-level gear. It looks like Destiny 2’s UI has a nice reminder built-in.

The engram decrypts instantly into a legendary weapon and two copies of a shader called Dead Zone Foliage (so it looks like shaders aren’t infinite once you’ve acquired them any more). 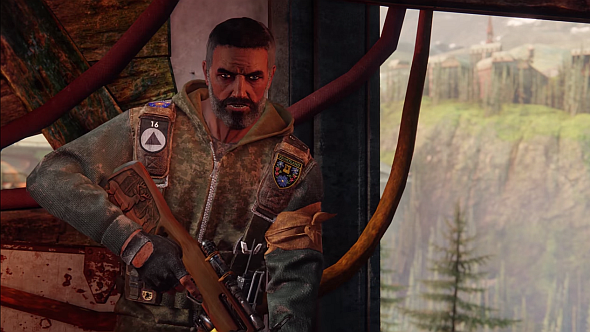 As for the EDZ itself, its environments look very varied – there are some urban ruins reminiscent of the Widow’s Court Crucible map from the original game, some rocky uphills, and some heavily forested areas, much like the Farm that we saw in the console beta. Your main enemies are the Fallen, who seem to be almost everywhere on Earth, and the Cabal, who have set up a new Firebase named Hades. Could this be the setting for the raid? There’ssome evidence to suggest it.

We get a brief look at several activities. Devrim hands us one of the new Adventures – a multi-stage quest named the Frame Job, which seems to turn around hacking Fallen comms and, we presume, framing one of their leaders via a message “in Fallen speak.” Ghost – our AI assistant – also mentions that he can teleport Fallen explosives elsewhere according to need, which hints at some exciting possibilities.

The trailer concludes with a hint that NPCs like Devrim will fight alongside you. “It’s a brave new world out there, Guardian,” he says. “Let’s meet it together.” The final shot is of Devrim standing among a fireteam of three Guardians. Could this mean that he’ll join your party in a more meaningful way than Zavala or Ikora did in the Homecoming story mission?