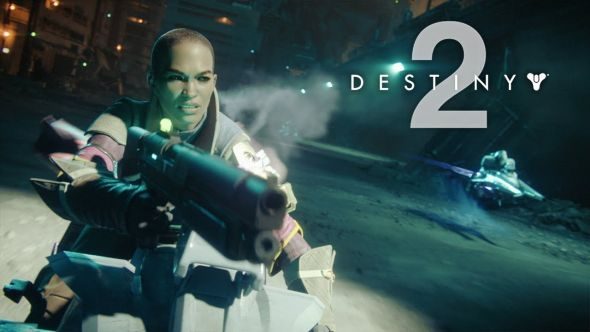 Gosh, imagine getting the full version of Destiny 2 on September 6. Wouldn’t that be nice? The above launch trailer, hitting a full two months before the game is due out on PC, makes sure that wish is very much at the front of your mind. That said, it’s also pretty rad.

As for everything we actually know about Destiny 2 PC, check our dedicated article.

In the trailer, we see Destiny’s beleaguered cast of characters doing their best to beat back the oncoming tide of big ‘n’ uglies that we’ll be spending hundreds of hours killing. For the uninitiated, it’s a light show of the pretties and general Epic Sounding Dialogue, plus there’s a chicken.

Our resident Destispert (Destiny expert, don’t steal my turn of phrase), Rich, tells me the dude near the start having a chat with big bad Ghaul may be more important than I realise. I’ll hand it over to him for the loregasm:

“The prisoner Ghaul is taunting is The Speaker, who interprets the will of the Traveler and is the Guardians’ spiritual leader. We didn’t know what had happened to him after the Cabal attack, but he’s clearly been captured, so rescuing him is probably something we’ll have to do at some point. Also the third guy in the scene, the villain in black armour, is probablythe Consul – we’ve known he exists, is a mentor to Ghaul, and helped him overthrow the previous Cabal Emperor, but this is our first look at him. Some fans theorised the Speaker wasthe Consul and had betrayed us, which now seems unlikely.”

Still with me? Doubtless it will all be explained, for noobs and veterans alike, once we get in-game. Our first shot at that will be next week, when the Destiny 2 PC betagoes live with a few extra goodies. Then it’s the long, slow wait for October 24, which is looking less and less like a bad joke as time goes on. At least we get text chat.