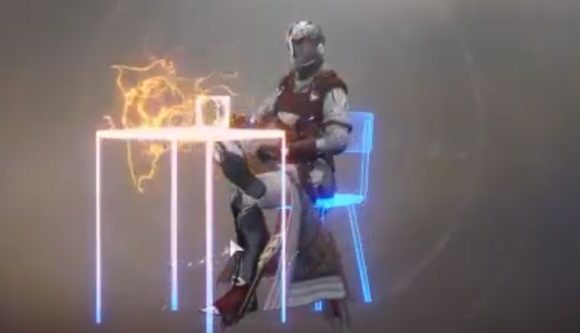 You know those days where everything goes wrong, but you can’t be bothered to do anything about it? Where your life is falling apart, but just a little bit? Where it’s easier to bask in the chaos of your own personal disaster than to actually do anything about the crisis bearing down upon you?

If you know that feeling, then you probably know the accompanying meme. “This is Fine” by cartoonist K.C. Green first appeared as a Gunshow webcomic in 2013. The comic features a cute dog sitting happily at a kitchen table while the house around him burns to the ground.

The comic has been recycled and reinvented across the internet an uncountable number of times, but its latest reincarnation is as a Destiny 2 emote. “Nothing is Wrong” was added to the game as part of its Season 5 patch, which hit live servers earlier this week, along with a bunch of bug fixes, balance changes, and brand-new Pinnacle weapons that everyone can get their hands on.

The emote sees your guardian sit down at a virtual table, nonchalantly cross their legs, and take a swig from a virtual hot beverage. Then they sit back, relax, and casually watch as the entire tabletop bursts into flame.

The emote attracted the attention of several of Green’s fans, who wanted to know if the artist had been paid for Bungie’s use of his art. According to Green himself, however, “it’s not an issue.” The artist tweeted in the wake of the emote’s arrival, saying “several of y’all sent me this asking about being paid for it. It’s a reference! It’s parody! It’s nice! I truly don’t think it’s an issue.

lost in all the news today, several of y’all sent me this asking about being paid for it. it’s a reference! it’s parody! it’s nice! i truly don’t think it’s an issue. https://t.co/8YgXj9bnwc

Green goes on to say that “I’m not the one who [sic] animated it and made it look like that, whomever did that should get paid.”

Elsewhere in Destiny 2, the arrival of Season 5 also brings a new raid to the game. Black Armory adds an official raid to the Last City, which you’ll be able to get started on from December 7.