All PC players can pre-load the open beta at 10:00 Pacific, or 18:00 BST, today. Open beta access begins on Tuesday next week, but you can get in a day early if you’ve pre-ordered.

Related: everything we know about Destiny 2.

The news comes in Bungie’s latest weekly update. Head to Blizzard’s Battle.net after those times and click the big ‘Install’ button. The beta opens on August 29, runs to the 31st, and is free to all. If you pre-ordered, make sure you’ve redeemed your early access code at Bungie’s portal, and get ready to kill some aliens on Monday.

Read on for our original coverage on system requirements, beta content, and so on.

Update August 16, 2017:Destiny 2 has been added to Blizzard’s platform.

In advance of the PC open beta – which kicks off in less than two weeks – Destiny 2 has been added to thenewly restored Battle.net.

Here it is, sitting alone in the brand new ‘Activision’ section: 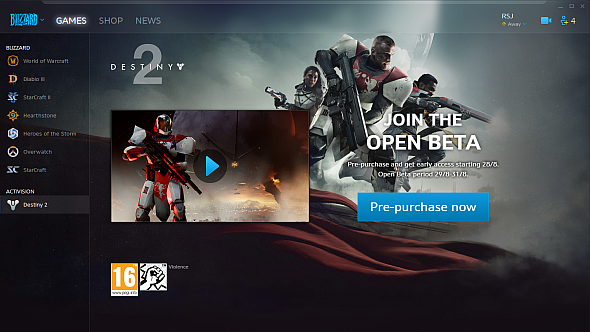 In other recent news, a trailer for the PC beta just dropped:

The PC beta goes live on August 29, or one day earlier if you’ve pre-ordered the game. If you’re curious, this is your chance to give Destiny 2 a free try: check our previous coverage below for system requirements, details on what you’ll get to play, and what’s changed in the new build since July’s console beta.

Update August 11, 2017:Bungie’s latest update outlines the specific changes from the Destiny 2 console beta to the PC one.

Besides the expected bug fixes, there’s encouraging news on ability and Super tuning, which were some of the biggest talking points from the console beta. There’s also some important news about the security measures Bungie are taking to ensure Destiny 2 on PC doesn’t go through months of awful hacking, like The Division did.

“The methods that some third-party applications use to add features (inserting code into the game client) are the same as some of the methods hackers and cheaters use to disrupt the experience of other players,” Bungie say. “As a part of our security efforts, we have designed Destiny 2 for PC to resist all attempts from external applications to insert code into the game client.”

That said, Discord, Mumble, and some third-party streaming applications (e.g. OBS, XSplit) should work fine, but without any overlay functionality. When it comes to technical features, Destiny 2 will include an in-game FPS counter, and we’ll get the ability to specify a framerate upper limit.

On the gameplay side, among the most important changes are global reductions in Super charge times, an increased power ammo drop rate in PvE, and increased grenade damage in PvE. It sounds like Bungie are still keeping the slower ability cooldowns – though, our theory is you’ll be able to speed these up with armour mods – but they feel greades should be more powerful to make “the longer cooldowns more palatable.”

Three notable glitches from the console beta – which granted infinite Supers, infinite grenades, and near-endless Warlock glides – have also been fixed. In a change from the design of the original Destiny, Warlocks will have the same melee range as all other classes.

The PvP game, Crucible, has also been adjusted. In the casual ‘quickplay’ playlist, the winning score in games of Control has been raised from 75 to 100 to let matches run a little longer (this should guarantee at least one Super per game). The Mercy rule will also trigger less often. In the competitive playlist, skill rating calculations in Countdown have been tweaked.

Here’s the announcement on Bungie.net.

Update, August 4:Last week,Bungie announced that the Destiny 2 PC beta would begin on August 28 and run to August 31. Today, they delivered on what their hopes are for that beta, as well as outlining how third-party programmes like OBS and Discord might work with the game.

As outlined in aThis Week At Bungie article, the aims for the PC beta are to test well Destiny 2 will work on a new platform. Bungie hope to be able to give PC players “their first taste” of the game while leaving them “a world of surprises” when they got their hands on the final version of the game.

The PC beta includes some tweaks from the console beta which took place a few weeks ago. Community manager Cozmo says “We’ve answered feedback on how often you have access to power ammo or your super abilities. These changes will be subtle.”

PC beta players will have access to the Homecoming story mission, the Inverted Spire Strike, and two PvP modes; Countdown will be available on Midtown, and Control will be playable on the new Javelin map. Both PvP modes are 4v4.

The other major issue highlighted in the beta is a discussion on how Bungie aim to combat cheating in Destiny 2. Bungie say they’ll be resisting attempts to add code into the game, which will mean that streaming platforms like OBS simplywon’t work properly with the game.

Original post, July 27:The console beta for Destiny 2 is now over, so Bungie have finally dated the PC test. If you have early access, you’ll be able to play from August 28, but everyone else gets access a day later, August 29.

Bungie say the console beta for Destiny 2 was their biggest ever. Between August 28-31, let’s see if the anticipation for Destiny on PC smashes that record.

As well as revealing the dates, Bungie have also released the system requirements for the beta. These are a good gauge of what you’ll need for the full game, though they are subject to change.

If you want to check how your PC will cope, try our friends over at Can You Run It.