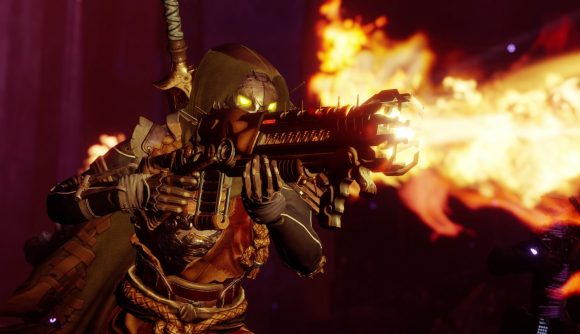 Following a recent adjustment, Lord of Wolves is now one of the most broken guns I’ve ever seen in Destiny (1 or 2). It’s worse than pre-nerf Vex Mythoclast, and might even be as bad as bugged Prometheus Lens. In PvP it can take down an enemy Guardian in one burst at extraordinary ranges. Players have been calling for a nerf since the change, and it sounds like Bungie has heard them.

Community manager dmg04 posted on Reddit a few hours ago that “the team is currently looking at Lord of Wolves and the recent tuning. When we have more info, we’ll let you know. Until then, release the wolves accordingly.”

That’s a sly reference to Lord of Wolves’ unique Exotic perk. Lord of Wolves is a burst-fire shotgun, and its perk, ‘release the wolves’, fires a longer, more powerful burst. Before the current Season of Opulence, this effect would trigger on kills, but you can now activate it manually by holding reload. It’s this which has caused the issue, as the longer burst contains more than enough damage to erase Guardians from full health ever in their Supers. Here’s a quick clip from famed Destiny PvPer TripleWreck to illustrate the point.

You’ll also note that TripleWreck is playing on PC, where the recoil from the longer burst is far more manageable. Some console players have said on Reddit that the gun feels more balanced there.

Tested the MAXIMUM lord of Wolves range with buffs. This is N U T S pic.twitter.com/7PBIG5Wujl

While it’s great that such an obviously broken gun is getting looked at, it’s notable that the latest Iron Banner PvP event goes live later today. Unless a Lord of Wolves nerf lands in a hotfix at the same time, Iron Banner won’t be much fun for anyone who hasn’t got it yet. If that’s you, it drops from Spider’s bounties.

Into the endgame? See our Destiny 2 Crown of Sorrow raid guide

Iron Banner has had a bit of a shake-up for Season of Opulence. This time, you’ll earn its armour through a quest, with each armour piece dropping (as a powerful reward) at the associated quest step.  Check out the latest Bungie weekly update for more details.