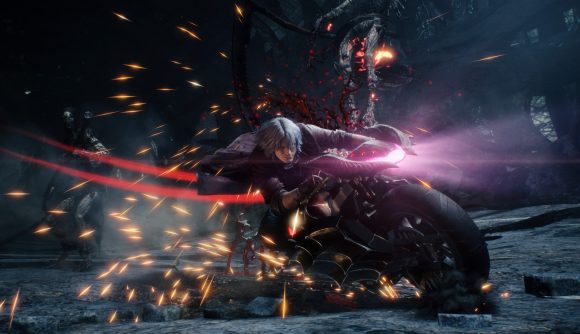 Devil May Cry 5 releases on Steam later this week, so it’s time to make sure your PC will actually be able to hack it when it comes to Dante and Nero’s latest adventure. The stylish action game won’t demand too much of your GPU – relative to any other big-budget 3D game, at least – though CPU requirements are a bit stiffer than you might’ve expected.

For the minimum specs, you’ll want an i5-4460 or better, but ideally you’ll have an i7-3770. When the game’s specs were first posted, there was no info for AMD, but now we know you’ll want an FX-6300 for minimum requirements, although an FX-9590 is recommended.

When it comes to Graphics cards, you’ll need an NVIDIA GTX 760, which is surprisingly old, but you’ll want a GTX 1060 to get the recommended experience, which is a step up from the previously-suggested 960. By contrast, AMD’s requirements are a Radeon R7 260x at the lower level, or a Radeon RX 480 if you’re looking for the ideal DMC experience..

It’s worth noting that Capcom doesn’t specify what kind of performance to expect here. Monster Hunter: World system requirements, for example, were set for 1080p at 30fps across the board, which is not necessarily the kind of experience many PC players are after. DMC5 is targeting 60fps on consoles, so that does suggest it won’t be too difficult to reach that level of performance.

You’ll also need 35GB of hard drive space, and Capcom recommends using a controller. (If you’re in need of a pad, be sure to check out our guide to the best PC controllers.) The Devil May Cry 5 release date is coming in fast, so you’ll certainly want to be prepared ahead of launch.