Diablo 2 is nearly 21 years old. However, despite a direct sequel and plenty of competition in the action-RPG space, Diablo 2 has demonstrated some serious staying power. It’s thanks by and large to the game’s community of modders, who have happily pitched in to fill the void, providing new content for others while they wait for the Diablo 4 release date.

Some fans have even gone as far as to try and remake the game itself. Project Diablo 2 is built around the idea of creating a version of the old PC game that resembles something Blizzard would have made as an immediate follow-up. It launched last year, hitting a peak of 12,500 players in its first season – so if it wasn’t already clear, Diablo 2 is still a big deal.

It makes perfect sense that Blizzard is bringing it back with a remaster. With Diablo 4 in the works, alongside a mobile spinoff, the series is primed to make a comeback. Even if Diablo 2: Resurrected is merely here for preservation, it gives Diablo fans and newcomers alike a fresh option when approaching the series.

Following the BlizzConline reveal of Diablo 2: Resurrected, we spoke to lead artist Chris Amaral, and lead producer Chris Lena, about Blizzard’s plans for the beloved series. 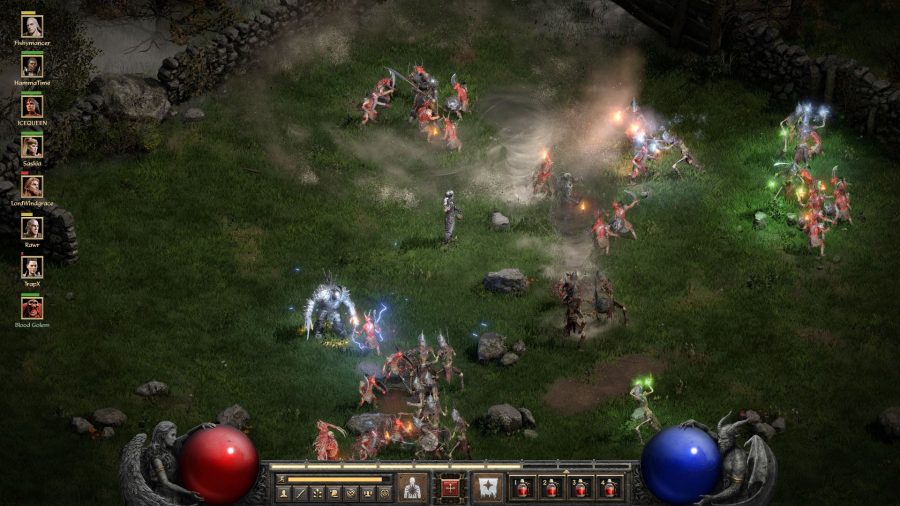 PCGamesN: Why did you decide to remaster Diablo 2, and why is now a good time for it?

Chris Lena: I think Diablo 2 has always had a special place in Blizzard’s heart. In a lot of ways it defined a genre. So this is an opportunity to bring it back for people that enjoyed it at the time, but also to modernise it in a way that can bring it to people who have never played it before. Maybe even people who weren’t born when it came out.

So redoing all the art, making it look like how we remember it looking at the time, and bringing it to consoles – all of that helps bring it to new audiences.

Chris Amaral: I think ARPGs are still very popular, and this is really revered as a piece of gaming history. Even playing it today, Diablo 2 still holds up really well. It’s still a fun, incredible game. So, as Chris said, this is about bringing it up to a more modern standard to get more people involved.

I recently spoke to fans who have been remastering Diablo 2 for themselves over the years. They typically tell me the things they try to keep intact are: story, NPCs, atmosphere, enemies, music, sounds, core gameplay mechanics, and loot. What areas of the game do you feel are important to preserve?

CL: That sounds like a similar list to ours. We didn’t want to touch anything that impacts how the game plays and feels.

The things we did want to improve have more to do with quality of life than gameplay. The shared stash is a great example of this. You don’t have to have mule characters anymore. You can share loot between your characters, but that doesn’t change the moment to moment gameplay, and it doesn’t change how loot works or anything like that.

But, we did keep the character inventory the same size, so you still have to do that Tetris-style inventory management to squeeze loot in. Even though both of these changes affect how you hold items, only the latter impacts your gameplay. You know, when do you go to town? When do you use the town portal to sell stuff and get more potions? It’s all part of what made Diablo 2 special.

Players have cheesy strategies and classes they’ve come to love over the years. Are you keeping those intact, or will the game receive a balance pass to give the lesser loved classes their time in the sun?

CL: Yeah, we made a decision not to do balance changes right now, for the very reason that we want to make sure we deliver the authentic experience. Who knows what might happen in the future with feedback. I know our designers have a list of things they would love to do. So we’ll see how that goes going forward. 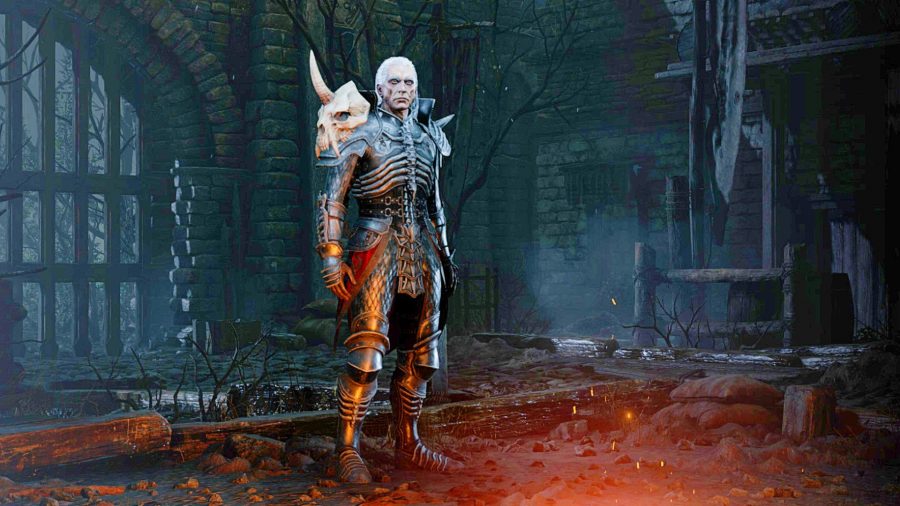 Was there anything you felt you had to change to modernise things? How do you strike a balance between modernisation and preservation?

CA: On the art side, we developed a 70/30 visual guide. That 70/30 guide is there to retain what was important for the original game while still adding something new.

So, the 70% is the classic, which means we don’t mess with it, change anything, deviate, or redesign. We do a lot of squint-testing when we evaluate our art, to ensure it retains that same look and feel. The 30% is where we add and embellish with more detail and storytelling. A good example of that is the druid class. We know that he originally had a lot of Slavic and Celtic influences. By going through some of our backstories, we found a lot of original art and reference images from the developers. We could tell that they wanted to push more of that Slavic and Celtic look into his kit, so we brought more of that into his design and added more trinkets and accessories to make it feel like he has an updated look and story.

CL: I think there’s some more even basic stuff that we thought was important. We brought it to the console, you can use a controller, you can play the game on modern resolutions – all that really basic stuff allows it to be accessible to modern gamers.

So you mentioned before that you found old concepts from the original game to guide the art. Was there anything unexpected?

CA: I think it was Larzuk. I’m not sure if you’re familiar with Larzuk – he’s a barbarian NPC from Harrogath in Act Five. His inspiration was Marky Mark, at least according to the reference image that we found.

So that was really the only strange thing we came across. Everything else seemed pretty much on par. Even looking at the art, you would never have guessed it – there’s no correlation between [them]. Maybe someone just threw it in there as a joke. 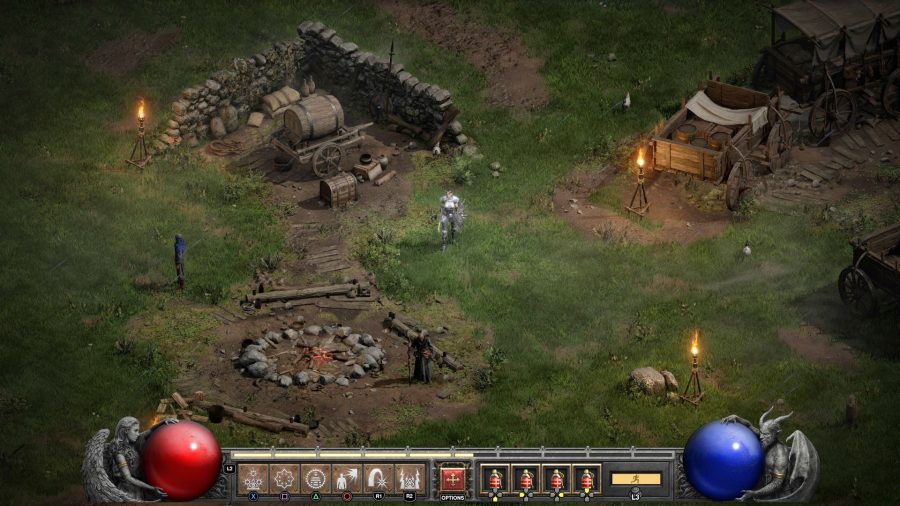 Is Larzuk more like Marky Mark in Resurrected now?

CA: No, we do look at the reference images, but our main focus is the sprite game art. We use that to determine how we make the HD version.

The original Diablo 2 also features item duping, which affects trading, and other exploits like cheats and bots. How are you guys tackling all of that?

CL: I think the main thing is going to modern Battle.net. Being on that system gives us a lot of inherent security features that Diablo 2 currently doesn’t have. So that’s a big part of it.

We’re also going through the game and fixing things as we find them. Hopefully, the technical alpha will also help us find those [exploits] and close them as we encounter each one.

Diablo 2: Resurrected is coming with cross-progression, but will there be any crossplay? Is it something you’re open to?

CL: Yeah, right now, we’re just launching with cross-progression. We don’t have anything else to announce around crossplay right now. But it’s a cool feature. 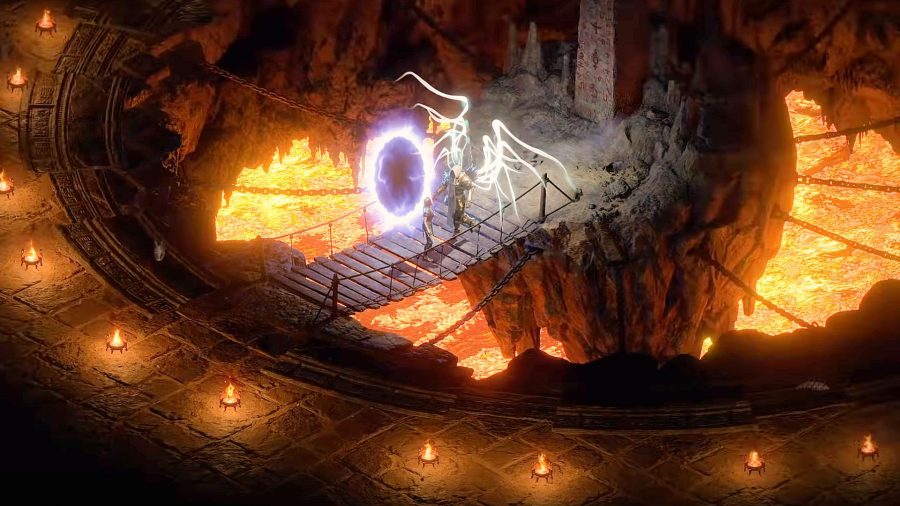 You revealed that Resurrected is getting modding support – can you tell us a bit more about what that entails?

CL: One of the things that has kept Diablo 2 alive is the modding community – so we appreciate all the work they have put into the game over the years. I think we can split this into two separate categories.

There have been mods in the past that injected code straight into the game, and those are the kind of things that we cannot support. But all the other mods – you know, the ones that use data and that sort of thing – we love to see those.

As we’ve gone through the game, we’ve switched a lot of things that used to be hardcoded into data. So when it comes to that [data] side of modding, there should be more things available and they’ll be easier to access.

How will Diablo 2: Resurrected be maintained once it releases? Will there be balance patches or updates to keep it fresh?

CL: I think that conversation starts with the technical alpha and goes through to launch. It’s really about what players are looking for and what they want. We love this game – we’re remastering it 20 years later – so we would love to continue giving players what they want.

CA: Yeah, I think our focus is really to listen to the community and see what they say online, and then see where it goes from there. 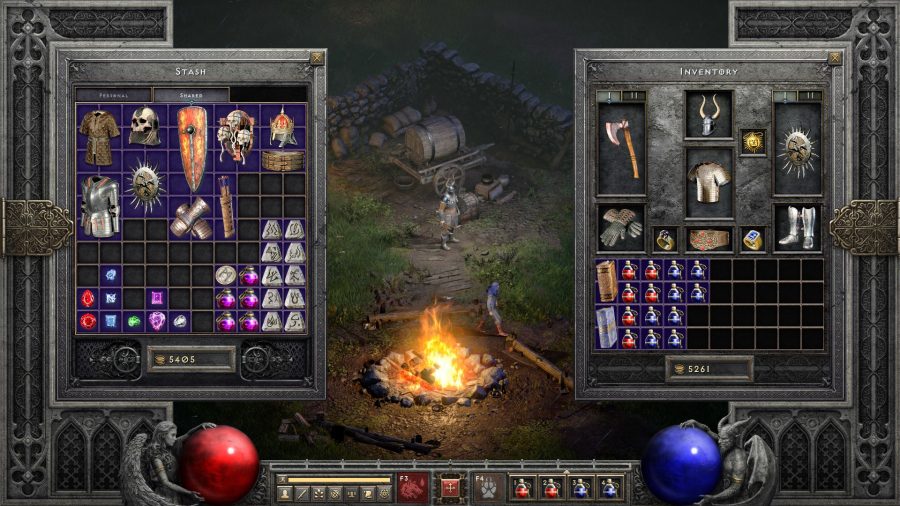 The genre has embraced live service over the years. Were you ever tempted to go beyond a remaster and bring Diablo 2 more in line with the games it ended up influencing?

CL: I wasn’t involved in all the conversations. But, you know, we also have an entire Diablo franchise here. We have Diablo Immortal coming out soon, we’ve got Diablo 4 coming out, so a lot of these things fill different desires for different people. I think with Diablo 2, and where it sits in history, we want to stay true and not mess with that too much.

Is there a timeframe on when we’ll get to play the beta or when the game will release?

CL: It’s pretty much what’s been revealed so far. We’re going to start with a single-player technical alpha, and then we’ll have a second technical alpha after that, which is [for] multiplayer and stress testing. Launch is this year, but that’s all we have in terms of specifics.

You can opt in for the Diablo 2: Resurrected alpha, or you can check out our list of the best games like Diablo on PC if that’s too long to wait.