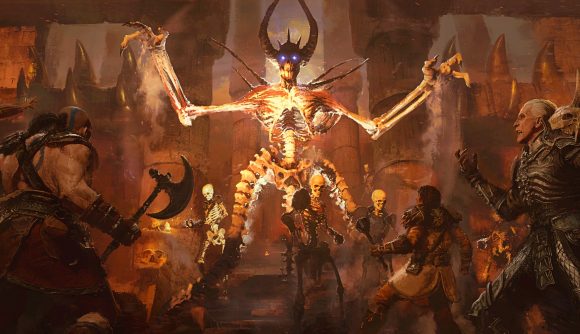 Project Diablo 2 is a fan-led attempt to bring the classic ARPG into the modern day like Blizzard never moved on from it. After being reverse-engineered so the team could pack it with quality-of-life updates, the enterprising fans have kept it going with regular seasons of content, much like what Grinding Gear Games does with Path of Exile. Now, though, the team is putting together a limited-time battle royale mode.

The way it works is pretty straightforward. You’ll enter a new map where the monsters have been replaced with “super chests”. You then get five uninterrupted minutes to dart around in the nude while trying to loot chests for gear. Once you’re looking more modest, you’ll duke it out until you’re the last one standing, plundering those you bop for better equipment and nicer clothes.

There are plenty of rules to keep things interesting, though. You’ll get access to a naked level 30 class, though you won’t be able to play the same one for two rounds straight, so pick wisely. You also won’t be able to use mobility skills for two minutes during the looting phase, so don’t get any ideas.

Oh, and you best not annoy the referee. If you get caught doing large amounts of “ring around the rosy-style turtling”, you will get disqualified.

The team is also curating a list of banned skills. The list may change before the event, but here’s what they are at the time of writing:

The team is testing the earliest iteration of Project Diablo 2’s battle royale mode today (April 23). If you’d like to join in, you can find details on how to do so here. If you fancy learning more about Project Diablo 2, you can find our interview with its head honcho, Senpai Something, right here.