Diablo 2 fans have been finding ways to keep the classic ARPG alive long after Blizzard has moved onto other games. Some projects show off what Diablo 2 in 4K looks like, while others teleport the game somewhere else like Grim Dawn. This Diablo 2 mod, however, is being designed around the idea of what the old PC game would look like if development never stopped.

“We’re improving quality of life, making skills that were mechanically limited by the design of the times more viable, and improving a lot of dated design concepts that were just a result of the early days of game development,” the Project Diablo 2 lead tells us. “It’s essentially about applying 20 years of RPG knowledge and backdating it to Diablo 2 so that we can pretend the game has been patched that long.”

Project lead SenpaiSomething goes on to explain the design philosophy means creating more builds, items, endgame content, and giving players reasons to group up by adding new maps – which he notes are similar to a Path of Exile system. He also says that the Diablo 2 mod will feature new dungeons for groups that want more team play. These dungeons are optional side-content that requires support and tank builds, which he says is a foreign concept to most ARPGS.

“We are trying to create an ARPG that allows you to play whichever way you want,” Senpai Something says. “Any build, solo, group, boss-focused – you choose it and play it.”

The team’s plans for the Project Diablo 2 mod stretches beyond its release. Every four months, the server will be reset, and new content and balance updates will be introduced to keep the economy and gameplay fresh.

As we’ve seen a few Diablo 2 fan remasters over the past few years, I ask SenpaiSomething what makes this one different. He tells me that the main difference is that the team isn’t trying to remaster the game, but is “trying to create Diablo 2.5”. 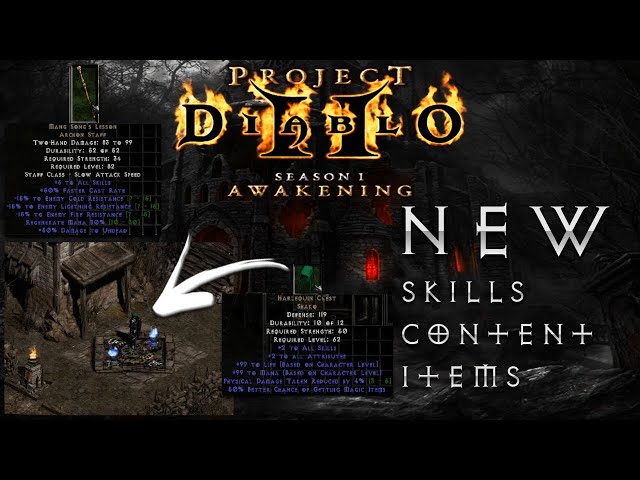 “A remaster is mostly focused around a graphical overhaul whereas this is more oriented towards another Diablo 2 expansion,” he says. “However, this one differs in the sense that we are able to reverse engineer Diablo 2 and are not trying to create a ‘mod” or ‘new game’ like many of the more technical savvy modders tend to do.”

The Diablo 2 Project is currently in alpha, but you won’t have to wait long to play it for yourself. SenpaiSomething tells me that the team is aiming to have the mod out between late summer and early fall to avoid Path of Exile’s reset. There will also be a closed beta for some of their patreons, and then an open stress test beta for everyone after that. In the meantime, though, you can check into the Project Diablo 2 Discord if you’d like to keep up to date with what’s going on.