Reports of an official remake of Diablo 2 from Blizzard have been picking up over the past couple of weeks, but fans have been keeping the classic PC game intact for years. Last year we spoke to one modder who has given Diablo 2 a refresh and keeps it up to date like Blizzard even never left it. Project Diablo 2 isn’t the only fan-made rework around, though. Another popular one is called The Curse of Tristram, though the team behind it are about to move on.

“With the upcoming Diablo 2: Resurrected announcement in a couple of days by Blizzard (rumour), we decided to polish and release an unfinished version of The Curse of Tristram on Battlenet this weekend (February 12, 2021),” Modder Egod123 explains on YouTube. “This version is definitive and final and includes everything we made so far.”

The Curse of Tristram is a fan remake of Diablo 2 Act 1 that you can find in Starcraft 2’s Arcade. It features new items to farm, fresh economies to master, and can be played with up to four friends on normal, nightmare, and hell difficulties. The team even holds weekly events to keep things fresh.

Alongside the expected reveal of Diablo 2: Resurrected, modder Egod123 explains that it’s simply time to move on. It’s become pretty hard to work with the Starcraft 2 engine as it’s been slowed down by heaps of code. The team does plan to keep the project updated with bug fixes, but that’ll likely be it.

As for what’s next, the team is taking everything it’s learnt and is plunging into indie dev. “It was an incredible adventure, and we’ve decided to move on and officially become indie devs by learning Unreal Engine 4 and 5 with all the experience acquired from this awesome project.”

You can see Curse of Tristram in action below: 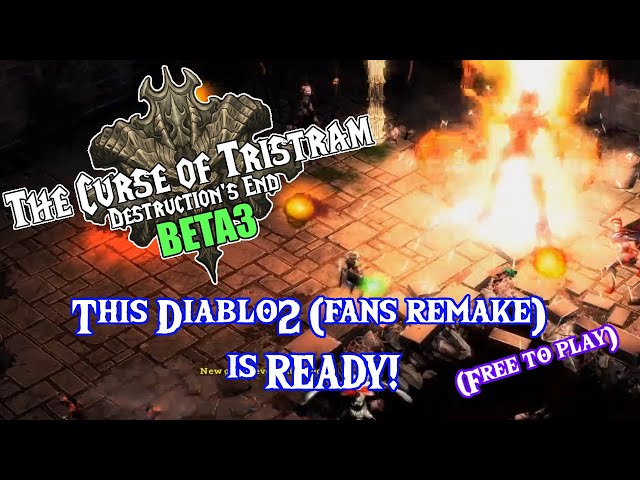 Diablo 2: Resurrected hasn’t been confirmed yet, though a recent report from Bloomberg explains that Tony Hawk’s Pro Skater 1 and 2 studio Vicarious Visions is reportedly working on it, and was folded into Blizzard as part of the process.

Either way, we might find something out soon. Blizzard doesn’t expect the Diablo 4 release date to fall this year, but the BlizzCon 2021 schedule details a Diablo deep dive, so we may get heaps of details on other things to tide us over.