Over the weekend I hopped back into Diablo III to try out its most recent patch, 2.3. I do this fairly regularly with Diablo, launching myself into it for a couple of dozen hours any time it catches my eye, rinsing the latest content then waiting for the next set of changes. What’s interesting is it now looks like Blizzard are encouraging that exact sort of playstyle through seasonal play.

Seasons rotate every few months and are essentially a new starting point for everyone, if they wish to take it. You can’t access your non-seasonal items, characters, gold or upgrades while playing in seasonal mode. Once a season ends everything you’ve done transfers to the main portion of your account, merging the gold totals, unlocking anything that was unique to that season’s playthrough.

Then you can start again. I know that sounds unappealing, because until this weekend it did to me, but it’s now what the game is designed around. Levelling a new character solo won’t take more than a few hours. In a group even less, and if you’ve got mates who are already at 70 to boost you, it’ll only be a bit over sixty minutes.

Once you’re there, the fun of gearing up begins. That can go in a few ways, either looking for loot that fits your playstyle, allowing the abilities you use to be moulded by what you start to find or a combination of both. What you will discover is that, very quickly, your power level starts to spiral out of control.

This is partly due to Blizzard’s design philosophy on set items, unique combinations that when worn provide very powerful bonuses based around certain skills and playstyles. This might be as simple as a massive damage buff or completely change the nature of how a skill is used – or both at the same time. Each season has versions of these that can only drop during it, making finding and experimenting with those a priority for veterans. 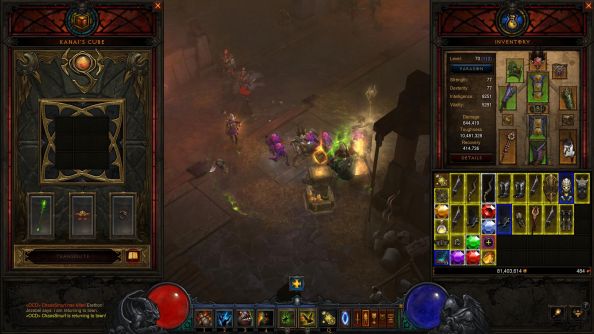 However, it is 2.3’s introduction of Kanai’s Cube that has buffed characters to a whole new degree, requiring that same patch to add four entire new difficulty tiers to keep up. It allows for easier gearing by letting you spend resources to turn one item from a set into another, or completely re-roll a legendary’s stats or simply create a brand new legendary out of any rare item you happen to have sitting around. Most importantly though, it allows the unique abilities from legendary items to be extracted and equipped in three slots, effectively giving you three more pieces of gear than before.

This can’t be overstated: that effectively breaks the game. High level characters could already put out an obscene amount of damage at unmatched speeds, but this allows for some utterly broken combos. There’s a term in Magic: The Gathering where certain decks are called ‘degenerate’ – the way they play is no longer recognisable as following the ordinary flow of the game and attacks from such a different angle that it’s not even Magic any more. That’s what it’s like taking a powered-up 70 into battle against Diablo’s hapless hordes.

My current character, a Witch Doctor I didn’t think I was going to enjoy but has quickly become one of my favourite avatars in a game ever, rapidly turns all enemies near her into pigs, that are then eaten by a giant frog and devoured by zombie piranhas. They’re also infested with locusts, attacked by three further types of zombies in the broad categories of giants, dogs and midgets and then haunted by ghosts. If they’re still alive I attack them with poisonous bats from my fingertips. Millions of numbers popping from their bodies, that’s usually when they decide to give up the loot.

And it’s brilliant. In a competitive game it would be a problem, but when the only ones suffering are a few heaps of pixels and health bars nobody’s complaining. It’s a challenge to push yourself to the highest difficulty possible, making positioning and vigilance essential to survival when most enemies’ attacks are as deadly as you are. With every pack of enemies slaughtered more loot is flung skywards with a chance to roll just the right stats and effects to redouble your damage even more. 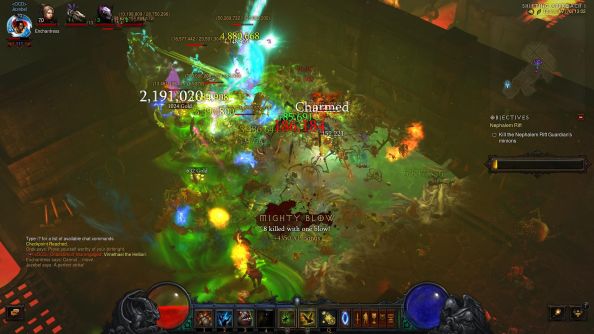 In the long-run, that might get dull – the endless grind towards perfection stops being fun when the steps get fewer, further between and smaller. That’s why the seasonal system is so good. In a couple of months I’ll retire my Witch Doctor and start a Wizard, or a Crusader or see if Blizzard have even managed the herculean task of making my old mainstay, the Barbarian, fun.

But that structure leaves me intrigued as to the future. Make no bones about it, there is a Reaper of Souls-style expansion on the way and likely to be revealed at Blizzcon. Take whichever piece of evidence you find most appealing: a second expansion was seen on a leaked internal schedule document some years ago; with 30 million copies of D3 sold, it’s a license to print money; story hints have been set up for the return of the Archangel Imperius as a bad guy for some time; expansions are just how Blizzard work and there’s nothing else on the slate for this year’s Blizzcon – the list goes on.

However, an expansion that works in the same way as Reaper of Souls did just wouldn’t be appropriate. A mild increase in the level-cap would be pointless with how easy it is to level, how overpowered characters at 70 currently are and the playerbase restarting every couple of months anyway. A new storyline should be told, but it’s going to be something players touch for one eight hour period when it comes out before returning to the more freeform bounties mode for the next eight hundred. 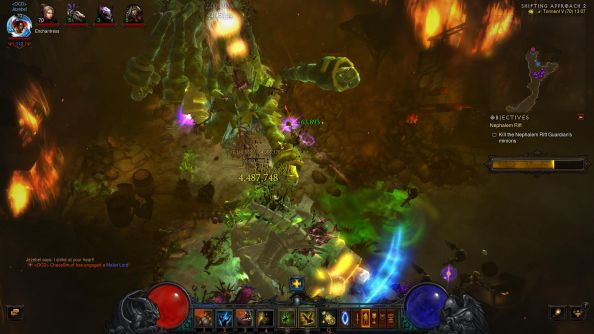 What I expect is that Blizzard won’t spend development time on rebalancing the game for level 80, designing a new levelling curve and working out what should be unlocked when for each class. Instead a series of artifacts, similar to Kanai’s Cube, will be used as a progression system through the new act. They’ll increase your power-level in unique ways, rather than levelling making all your current gear irrelevant so you can replace it with ones with bigger numbers.

What time is saved will be put into adding more than one new class and loads of skills to the ones that already exist, tonnes of new items, more zones with new enemies that have different affixes – all adding far more longevity and effective ‘content’ to the game than a few more levels. To contain all this more difficulty tiers would need to be added, but that’s something they’ve proven they’re willing to do and that obviously works.

Reaper of Souls’ appeal wasn’t really in that it added level 70, but in the massive reworks to Diablo III’s flawed systems that turned it from a much maligned sequel into the ARPG juggernaut – and personal favourite – it is today. Using RoS as a solid base means 10 levels of disconnect won’t be needed to shed the undesirable elements like they were before.

Of course, it’s possible that whatever Blizzard has in mind is so big they will want that disconnect, or that they see flaws in these systems I don’t. Either way, I’m very excited to see what’s coming next. If you’ll excuse me, these pots of spiders aren’t going to fling themselves.