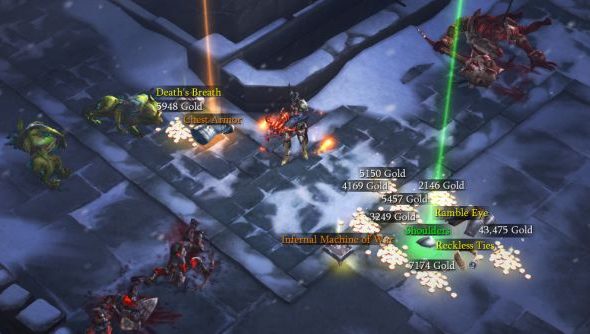 I’ve raved about the quality of updates for Diablo III over its lifetime before, so won’t do so again, but gosh they get me excited like WoW patches used to. More so, even, because the nature of the game means the vast majority of changes are always relevant to me. Today’s post details what’s being done to improve crafting, Rifts and bounties.

In the crafting area, recipes and materials are being simplified. Right now crafting often isn’t worth the cost of the materials required to do it except in very specific circumstances. Working that out also requires more brain power than is necessary. To fix both problems, materials are being reduced to a single tier and how many are used in each recipe is also going down. Legendaries also no longer require a specific material to craft, meaning making them will actually be possible and useful on new characters.

Bounties and rifts are being reworked to be more fun and more accessible, respectively. There’s no longer a limit on how many Nephalem rifts can be done, or any requirement for entering them – they’re now just an alternate way to play and earn XP. Bounties, meanwhile, no longer require a game reset – or pesky menu navigation – to give you bonus rewards. It’s also now clearer and simpler how Greater Rifts work, combined with changes detailed previously that leave you spending more time engaging in fun battles against giant monsters.

Lastly, and this is my favourite change, the two current Hellfire quests that grant very powerful and unique legendaries are being made less grindy. There’s still an amount of effort involved in earning them, but it’s no longer quite so random or boring to do so. Importantly, the items granted are now guaranteed to have a gem slot, Diablo’s most powerful affix, meaning you’re less likely to be landed with a useless item after all that work.

The patch should be out soon. We also think five’ll get you one on the chances of a new expansion being announced at Blizzcon later this year. Remember also that Blizzard have a lot planned for Gamescom in the coming week.