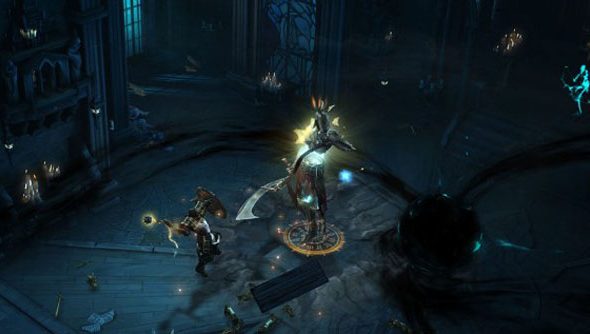 On March 18, Blizzard will break apart Diablo III’s auction house themselves. They’ve finally come to realise that it “ultimately undermines Diablo’s core play”, and that the business of killing and looting demons is better off without it.

Until that day, however, they’ll defend it to the last. The headline change for the game’s latest patch is a fix to the loot exchange system: gold can once again be purchased and sold on the Real Money Auction House.

Patch 2.0.2 – now live in the Americas and due shortly everywhere else – isn’t nearly so big as its predecessor, which nearly constituted an expansion in itself. Diablo III 2.0.1 was a transformed game, thanks to a fundamentally altered loot system, an end to the level cap, new difficulty tiers and a host of new social features.

2.0.2, then, is the patch that follows with dustpan and brush in its wake. Experience requirements for Paragon 500 and above have been tweaked upwards, sound notifications for Clan and Community chat have been disabled, and a collection of bugs introduced by 2.0.1 have been tackled.

The experience bar has been removed from the Followers UI, and level 60 crafted amulets now require fiery brimstone, as they were supposed to.

On the ground, meanwhile, Sokahr the Keywarden’s whirlwind attack has been reduced to a more reasonable amount of damage, the Siegebreaker Assault Beast no longer tries to busy himself with other things while conducting his grab attack, and the portal between the second Hell Rift and the Gardens of Hope has been repaired.

Have any of you lot picked up Diablo III since the weekend? Our Tim reckons it’s a totally new game – one that’ll only be further refreshed by the addition of a randomised Adventure mode in the March 25 release of Reaper of Souls.