And this horde of orange loot is why. Just look at it. A couple of weeks ago, this bountiful hoard of legendaries from Diablo III would’ve taken the majority of a month to acquire. What was even worse is that only one or two of the items would of been deemed “OK” at best, with the rest finding their way onto the auction house. Now however, they’re all really good.

The difference is I acquired all of that in one sitting of the campaign last night. Patch 2.0 – and most notably Loot 2.0 – is responsible, and it’s amazing.

It’s why you should reinstall Diablo III and get playing again.

And to think Reaper of Souls isn’t even out yet.

Now believe it or not, but the majority of patch 2.0 isn’t new to me. I spent roughly 200 hours on the Reaper of Souls beta, killing over 55,000 elite packs. Best of all, the good stuff isn’t locked away behind a paid for expansion pack: most of what the expansion offers is available right now, via a free 7Gb update.

That 7 gigabyte update is absurd. It includes a mammoth rebalancing of the classes, revised difficulty settings, clan support, Loot 2.0 and much, much more.

Here’s why it matters. 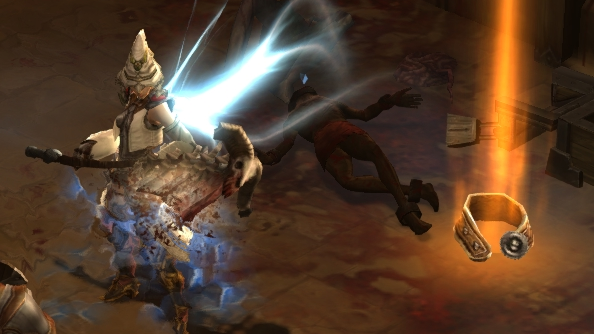 Loot 2.0 changes everything for the better

The foundation of the patch is loot 2.0: Diablo III’s rethinking of how loot should work in an action RPG. Now, any items, weapons or armour that drop won’t be entirely randomised. Instead, they’ll be picked with the intention of them being useful for your class. If you’re playing a Wizard, you’ll see armour stacked with intelligence. Barbarians, strength.

What that means is that characters abandoned before the level cap, as you rebuild them, will feel instantly more powerful. You’ll slice through monster packs, and burn through the campaign faster than you will believe.

Loot 2.0 comes with an interesting caveat: legendary items dropped are account bound by default, only being tradable to party members that were present at the time of the drop, and only then for two hours.

For those of you that can be brave in the face of change, here’s what you need to know. You will be getting build-changing legendaries at a very comfortable rate. They will often than not be better than what you have equipped, and at end-game feature skill specific affixes. Blizzards own algorithms try and prevent you from not getting a legendary item after two hours of moderate play. From my own experience, I’ve never reached that limit. 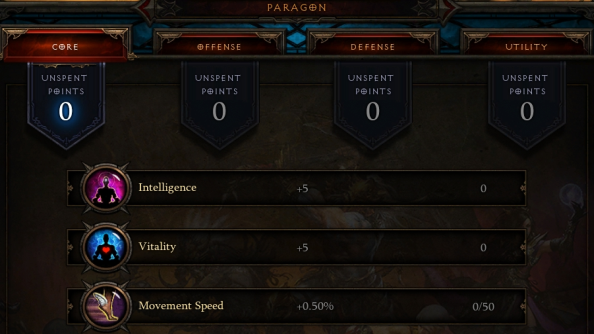 Introduced in an earlier patch, Diablo III’s Paragon system allows players to level their character beyond the maximum, up to 100 Paragon levels. It wasn’t long before the community quickly devoured it.

In the recent 2.0 patch, it’s been fleshed out further. There’s now no end to the number of Paragon levels you can accumulate. What’s more, they are account wide: across all your max level characters. Instead of just giving you a flat stat increase across the board, you can now allocate paragon points into multiple bonuses. Every paragon level earns you one paragon point: cycling through core, offense, defence and utility before going back to core. It is possible to max out every bonus, apart from your core which can be leveled indefinitely.

It’s great for plugging holes in your build if your items don’t cover it. Need a quick movement speed fix? Just put some paragon points into it, and take them back out once you find the appropriate item. There’s no cost in reallocating the points.

If you had some paragon leveled characters prior to patch 2.0, you will start at a preassigned level depending on some technical math and formula. The highest is around 480 right now.

Oh, and right now, levelling is really, really fast. You can now find Pools of Reflections within the game. These add a flat bonus of experience, stacking up to ten times and lasting until you die. There’s also a 50% bonus experience buff until March 24th in celebration of Reaper of Souls. 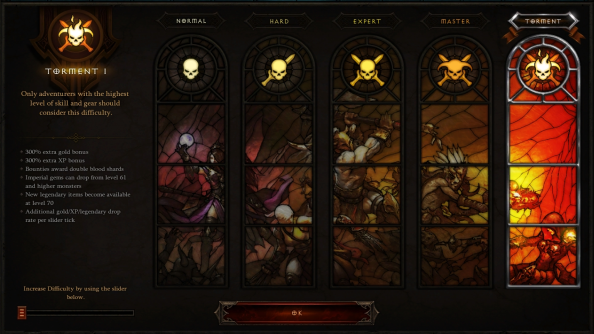 The game can be as hard or as easy as you like.

Once you’ve reached 60, you’ll want to add on Paragon levels, at as fast a rate as possible. And if you want to take the risk, you can up the difficulty level, increasing the XP, gold and loot rewards.

Hard mode will see you earning 75% more XP and gold. Expert, 100%. Torment VI, the hardest level in the game, will earn you a staggering 1600% extra gold and XP as you play.

If that sound insane… then yes, it is. But don’t think you need stupid gear to reach Torment VI: many players are running Torment VI with good gear, at level 60. When Reaper of Souls is out, there will be some Torment specific legendaries that can only be found in that difficulty. You can also lower the difficulty at any time while playing, but only raise it by one level. The only exception is when you’re playing hardcore, where it’s impossible to change the difficulty while you’re in game. 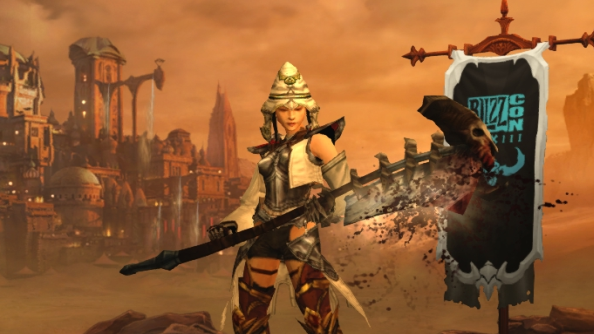 In Diablo III’s hardcore mode, death is the end. There are no respawns. If your character dies, that’s it. I’ve always been fond of hardcore, but it was a real drain before patch 2.0. If you didn’t get any lucky drops, you had a high chance of biting the dust due to such low stats. You would either have to grind an easy area or turn to the auction house due to the subpar loot system. This usually stonewalled your progress, and made it especially frustrating if you spent days at a time with nothing to show for it.

I decided to roll a hardcore Wizard late last night – pictured above – and see exactly what patch 2.0 meant for the mode. It’s astounding how much more fun it is. During act one alone I was constantly progressing my Wizard with new items, and inevitably new builds. In act one I got my first legendary item after beating the Skeleton King, three more from random mobs and chests and finally a double drop from killing The Butcher. In all five that dropped, only one of them didn’t roll my main stat. 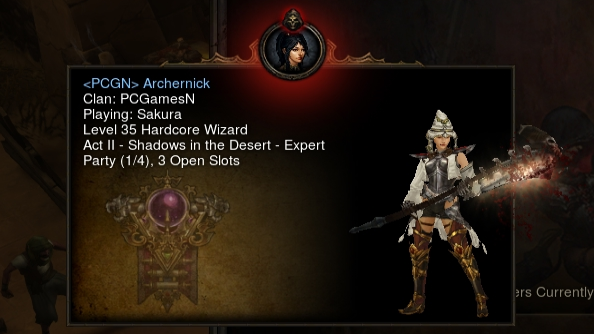 There’s no denying that Diablo III is a multiplayer focused game. I find it always lonely if you play solo; no one to share your epic moments with and equally epic loot. Now along with the friends list, there’s now a clan and communities system.

Clans are pretty much like guilds. They have an activity board which shows things like what legendary items members looted, or what achievements they attained. You can also post a message of the day and invite people straight from the roster to a game. Clans are limited to 120 members maximum. We have our own clan – and we’d love for you to join us.

For much larger followings, communities is the way to go. With no member limit, communities instead act as huge chat channels for like minded players.

We also have our own clan, and it rocks. If you reside on the EU server you can click here to find out how to join. 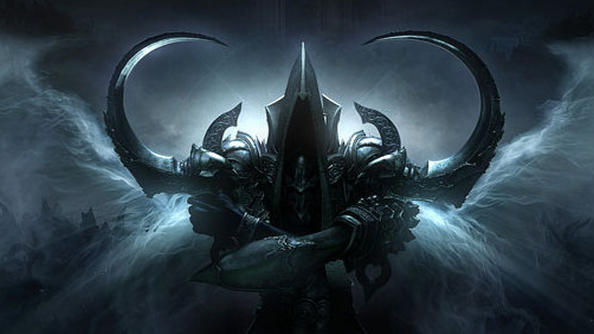 Adventure mode will make this even better

When Reaper of Souls finally hits on March 25th, things are just going to go from “awesome” to “GLORIOUS”. Adventure mode will be the pinnacle of the expansion: think of it as an action RPG’s take on an endless runner: it opens the game for you to roam as you desire. It’s a chance to ditch the campaign and explore the world of Sanctuary.

It works like this: you’re given five objectives within each act. They could include killing a certain unique elite, find and complete an event or tackle a boss. Completion will award you with a experience, blood shards, Horadric caches and rift keystones. Blood shards are used to gamble a specific type of item. While the outcome of the item rarity is random, this allows players to target a specific piece of gear for a possible upgrade. Horadric caches are jam packed of loot, gold and gemstones.

Rift keystones lead us onto the other half of adventure mode: rifts. Once you get your hands on a rift keystone, you can talk to an NPC in town and activate the nephilim obelisk. Stepping through the portal will put you into randomly generated area, with randomly generated enemies and with a random unique boss at the end. They’ve also got some twists: you can find packs of loot goblins or even levels filled with angry cows. 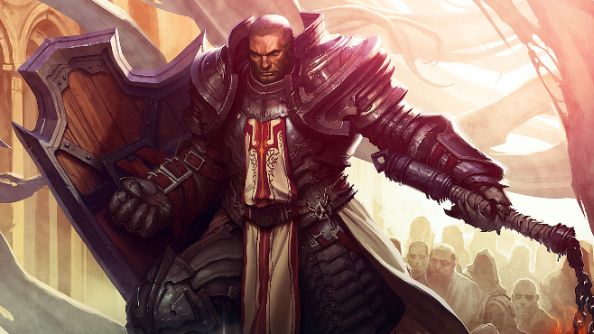 What’s better to enjoy the fruits of a new story act and adventure mode than a new class: the Crusader. This guy is a walking tank, wielding a flail and shield combo as his signature weapons. Notice the plural in ‘weapons’ – the Crusader charges head on into his enemies with sheer brutality.

Here’s how he plays in practice.

If you’re thinking of waiting until Reaper of Souls to start playing again, I can’t recommend enough that you dive right back in now. With Patch 2.0, the 50% experience buff and the fact you can find Crusader loot on the live server means you’ve got nothing to wait for.

Seriously, jump back in and you won’t regret a thing.