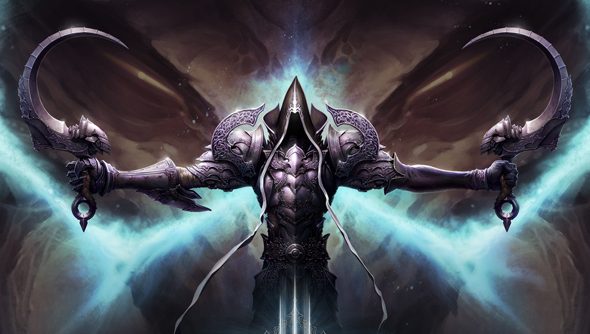 Hollywood teaches us that the sea retreats from the shore right before the biggest wave hits, as if Poseidon himself is gearing up for a really snotty sneeze. Today, Blizzard are breathing in. They’ve recalled their closed beta for next month’s Reaper of Souls expansion and pulled down the Public Test Realm for its imminent, accompanying patch: 2.0.1.

Reaper of Souls is due for launch in exactly a month, on March 25. We haven’t had a solid idea about when to expect patch 2.0.1 until this morning, when Diablo III lead producer Alex Mayberry told followers on Twitter that it would materialise today.

@Beckster188 thanks for saying so! Patch 2.0.1 goes live tomorrow. RoS is will be here soon!

Patch 2.0.1 is a major event. It’ll secret the majority of Reaper of Souls’ headline features into the game a whole month before the expansion lands.

Normal, Nightmare and Hell modes have been replaced by a “dynamic” system which has monsters level up alongside your characters – while players can customise difficulty mid-campaign via five settings: Normal, Hard, Expert, Master (unlocks at level 60), and Torment (unlocks at level 70).

Paragon levels will be shared between all your characters, and never stop – Blizzard have removed their cap entirely. And Loot 2.0 means wholly revamped itemisation: item properties will be separated into primary and secondary traits, random stat ranges have been narrowed to avoid disappointment, and rare “smart drops” will offer items with stats tailored to the character who finds them.

Both the Reaper of Souls and 2.0.1 PTR servers were brought offline in the early hours of this morning – rendering beta players unable to login and wiping their characters from this plane. The beta and PRT forums have been marked as read-only – until launch, Blizzard are done taking feedback.

“We’d like to thank everyone who has participated in the Reaper of Souls Beta and Patch 2.0.1 PTR,” they wrote. “You’ve done an amazing job of testing, and we greatly appreciate all of the feedback you provided during this critical phase of development.”

Will you be buying Reaper of Souls, or will 2.0.1 provide you enough new toys to play with?