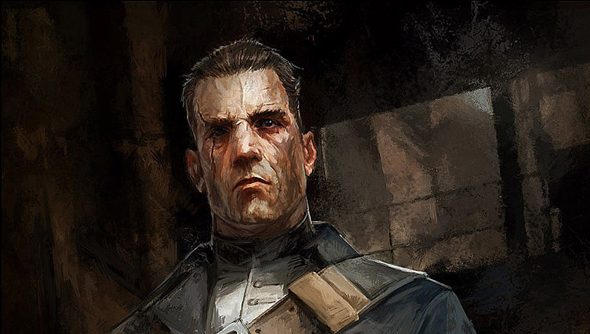 A Game of the Year edition of Arkane’s revenge (or if you’re playing the DLC, redemption) sim was briefly spotted with a blade to the throat of the Australian Classification Board yesterday, before it had a chance to blink away.

Really, I can’t tell you how chuffed I am that Bethesda are recognising my Game of the Year award in such proud and public fashion. My only concern is that, sooner rather than later, an Arkane game is going to be released in the same year as Bethesda Softworks’ next thing and they’ll be forced to plaster ‘Open-world RPG of the year’ on the box instead. Which actually sounds a little more reasonable, now I write it.

Of course, this is actually code for ‘All the DLC of the Year, Plus the Base Game’. What you’re almost certain to find in Dishonored new edition is its Dunwall City Trials challenge mode, as well as the assembled tales of Daud – in both The Knife of Dunwall and the imminently-released The Brigmore Witches.

See Rob’s The Knife of Dunwall PC review to find out what’s so fun about living through a master assassin’s crisis of confidence in first person. And watch Arkane’s QuakeCon presentation for a playthrough of The Brigmore Witches’ first mission.

Bethesda would probably rather you buy Dishonored’s final chapter on its tod next Tuesday. But if there was ever a run of DLC worth bundling together, this was it.

What did you make of The Knife of Dunwall, those of you who successfully navigated through it?