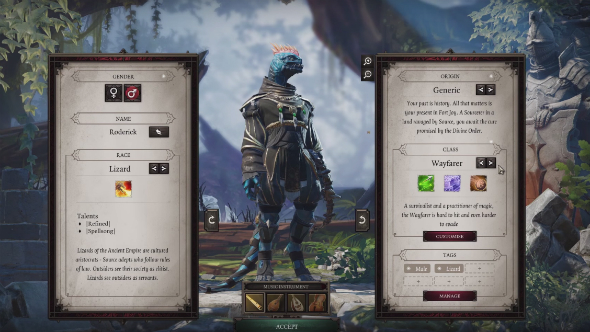 Most gamers have put more time into character creators than they would like to admit, and by the looks of it Larian Studios are holding up their end of the bargain by giving Divinity: Original Sin’s sequel an impressively diverse set of character creation tools. The system was previewed in a Kickstarter update video and explores both the superficial and stats-based side of setting up your character.

The good news is that if all that sounds horribly complicated to you, Divinity: Original Sin 2 will have a simple and painless basic toolset so you can avoid all the jawline tweaking and perk allocation RPGs often throw at gamers. The other good news is that if making the character is your favourite bit, there’s a tab that will open up all the ludicrously in-depth adjustments to you. Everyone wins.

You can choose your character’s gender, race, class, origin story – this will affect how some NPCs treat you during the campaign – and, peculiarly, their instrument. Your chosen instrument will be heard alongside the game’s music whenever you complete quests or reach a new milestone, which makes it the most wonderfully superficial character creation tool ever. You can watch the full dev diary below.

Divinity: Original Sin 2’s stats systems have also been refreshed, with Memory, Finesse, Intelligence, Wit, Strength and Constitution making up the core stats. Memory will dictate how many spells your character can utilise at any given moment, while Wit will aid in conversations and also allow you to spot traps more easily.