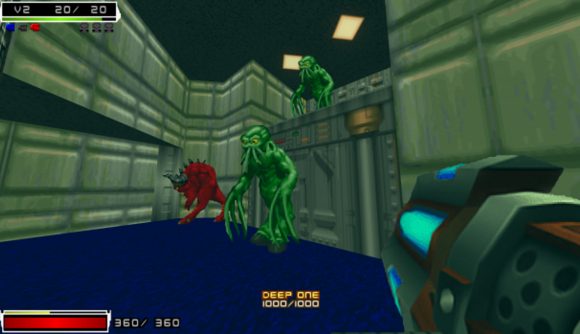 The wacky weapons in Ratchet and Clank are some of the best reasons to play the action-adventure games. One fan understands this, and has brought the plucky duo to PC by way of a Doom 2 mod.

Ratchet and Clank: Hot and Bothered is a mod for Doom 2, Final Doom, and FreeDoom, implemented using GZDoom, that adds a load of weapons, sounds, and monsters to make the FPS game feel more like Insomniac’s platform game. If you aren’t familiar, Ratchet and Clank is a long-running Sony series, starting back on the PlayStation 2, about a rodent action hero, Ratchet, and his robot sidekick, Clank. They travel from planet to planet, completing quests and trying to defeat evil, using an array of weapons like the Groovitron, Sheepinator, or trusty Omniwrench.

Here, modder That_Blind_Guy has included the likes of the Blitz Gun, Infector, and Mini-Turret Launcher, each capable of its own brand of chaos if you use it right. Ammo is well laid out, to make sure you’re staying in good supply, and sound effects include both Ratchet and Clank cheering about acquiring a new tool of destruction. You can upgrade the weapons, just like in Ratchet and Clank, up to V5, and your health up to 400.

In a post on ModDB, That_Blind_Guy says development on the gameplay is finished, and he’s now moving onto making more maps.

Here’s an extended demo from That_Blind_Guy, and his preferred settings:

You can download the latest version here. Since none of the eleven Ratchet and Clank games developed by Insomniac Games have made it to PC just yet, this is a welcome consolation. As always, mod with caution.