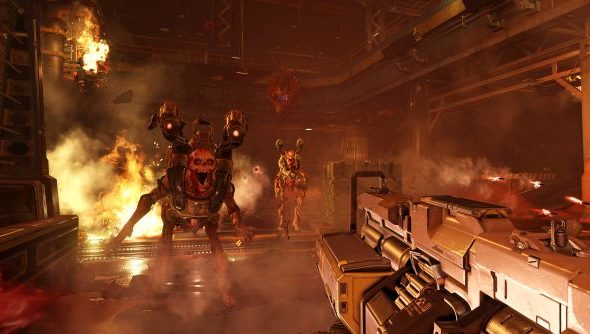 I’m excited for Doom, in case you’ve literally never read anything I’ve ever written before. It looks gorgeous, fast, stupid and bloody, which is everything I wake up for in the morning and try to emulate in my daily life. However, so far, most footage of the singleplayer campaign has been carefully planned demos on low difficulty, filmed on console by distracted id employees while they’re asked questions – not the best environment. Now, with the help of Nvidia, id have released a new video of how the game plays on PC at max FOV, 60 FPS, in 1080p with all the movement options turned on and somebody skilled (plus concentrating) at the death-wheel.

That’s a bit more like it, right? The quick-switching id have tried to push is actually there, the weapon choices feel like they’re logical and actually matter, and there’s enough enemies to take advantage of it. There’s the combination of speed and accuracy we expect from a mouse and keyboard with the player still, eventually, getting overwhelmed.

The technical details here are that this is the Vulkan API version of Doom, which will be coming some time after launch, running on a Titan X. So as far as graphical fidelity goes, this might not be exactly how it looks, but it is how it will play and control, and 1080p60 at 120 FOV isn’t going to be out of the realms of existence for anyone with a fairly beefy card. Even if you have to turn the settings down a bit, id say anything above a Nvidia GTX 970 4GB or AMD Radeon R9 290 4GB hits recommended in the Doom system requirements.

If you want the original video file for this, head over to Nvidia’s site, where it’s a whopping 2.1 gigabyte download of pure, speedy violence. Alternatively, just wait a few more hours to play it yourself – the game goes live at midnight tonight, local time in most regions.