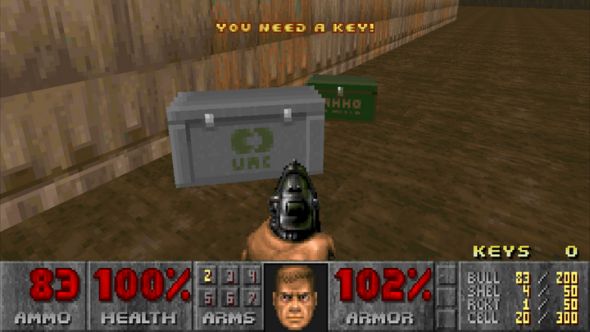 Loot boxes are a pretty hot topic at the moment, seemingly omnipresent across the industry. From the controversy surrounding Middle-earth: Shadow of War, to EA removing microtransaction entirely from Star Wars Battlefront II. Now, as if you thought the problem couldn’t get any worse, loot boxes have found their way into Doom.

Here are 32 of the best classic Doom levels.

Now, your mind might have originally jumped to the 2016 reboot of the Doom series. That would be fair enough, as its proximity to the modern day would suggest that contemporary trends would be likely to impact a game that came out last year. Strangely enough, you’d be wrong, as someone has modded loot boxes into the original Doom, which came out in 1993.

The Doom Loot Box Mod adds microtransactions to the game. Rather than allowing players access to better items over time, you’re limited to a pistol, relying on random crate and key drops from any enemies you manage to kill to gain access to new weapons. The mod also adds a store, letting you buy extra crates and keys to help you speed up the whole process.

Thankfully, the whole things is more of a parody than a real game, and the shop displays a generic error message if you do try to buy anything. As reassuring as that is, I can’t say I’m not worried it’s giving somebody out there some loot-box-themed ideas.