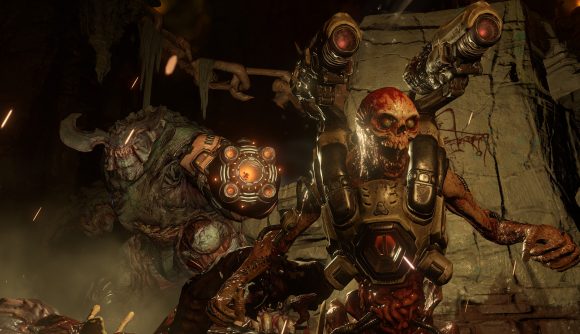 It looks like id software is about to jump back into VR. A rating in Australia has been filed for a VR game from Doom developer, and the project looks to be due at some point this year.

In an entry dated January 22, the Australian Classification Board has given Project 2021A, from id software and publisher Bethesda, an 18+ “Restricted” certification. Looking through the criteria, the game is listed as having high levels of violence, strong themes, and mild language, then no drug use, nudity, or sex, all of which sounds very id software.

Scrolling further down, no other substantial details are given, other than 2021 as the year of production, and it’ll have “online interactivity”. Smart money is on this being a VR version of Doom Eternal, following the same pattern as Doom 2016 getting its virtual reality counterpart, Doom VFR, in 2017. Another possible candidate is Quake, the last entry for which was 2017’s multiplayer game Quake Champions. The online aspect is curious, suggesting this could be something that has some PvP or co-op elements.

If it is a Doom Eternal tie-in, it’s unlikely to follow the same remit of Doom VFR, at least as far as platforms are concerned. VFR launched on PlayStation VR and HTC Vive, but since ZeniMax, Bethesda’s parent company, was acquired by Microsoft last year, PlayStation VR’s chances of getting another look in are slim-to-none.

We’ll keep you informed on what this ominous Project 2021A turns out to be – make sure to consult our list of the best VR headsets, so your hardware is ready to rip whatever happens.