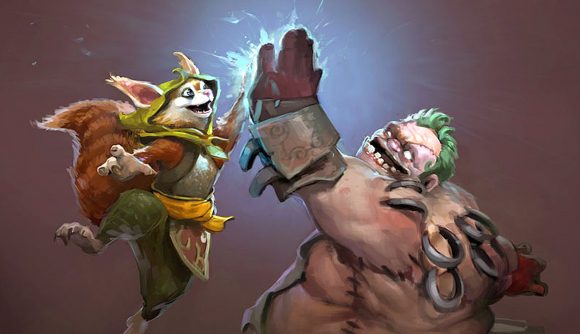 It’s just about summer, which means a new Dota Plus update is here for Dota 2 fans. The – yep, you guessed it – Dota Plus summer update has dropped, bringing new content to Valve’s MOBA game for those signed up to its monthly subscription service – including a new ability, guild banners, seasonal treasure, and more.

Launched today (June 2), the new Dota Plus update welcomes back the popular High Five ability – you know, “because nothing accentuates the highs of a good play — or immortalises a silly one — like a timely hand-to-hand salutation”, as the studio puts it. Fair point. Valve’s also now granted all members of a Dota guild the Guild Banner ability, which means they can showcase its status and logo whenever they fancy mid-game.

As for the new seasonal treasure, there are new sets for Dota 2 heroes Chaos Knight, Phantom Assassin, Outworld Destroyer, Wraith King, Sven, Treant Protector, Huskar, Brewmaster, Storm Spirit, and Naga Siren. Phew. There’s also “a chance to unlock the Trod and Cheddar courier, which comes preloaded with random prismatic and kinetic gems”, Valve says. The treasure can be picked up for shards.

Speaking of which, if you’re keen to pick up some extra shards, the new seasonal quests are offering up to 115,200 over the season. And, there are some new guild rewards with the summer Dota Plus update, too, which include things like new emoticons, sprays, and chat wheels at the silver, gold, and platinum levels, respectively.

For the full rundown, you can head to Valve’s announcement post here. We also have some handy Dota 2 neutral items and how to play Dota 2 guides if you’re keen for some tips, while our sister site The Loadout has a Dota 2 ranked guide if you want to know how to climb those ladders.