Want to know how exactly the Dota Underlords ranking system functions? Dota Underlords is in Early Access on Steam and Valve has already provided details on how ranks work for its beta season.

As part of the autobattler’s beta season, you can rank up your Underlord through eight tiers of progression, all the way from a lowly Upstart to a bonafide Big Boss. As this is the beta season and a lot of content is still missing from Dota Underlords, those ranks don’t translate to any cool rewards, and the ranking will not carry over when Underlords hits 1.0.

Each of the eight Dota Underlords ranks has five levels that you’ll need to grind through, and it can take quite a long time to reach the lofty heights of Big Boss. This isn’t just a trivial mark of progression though, as there’s a MMR system attached to it that determines your progress based on how you place in each match. Below, we’ll break down the fundamentals of the Dota Underlords ranking system so you can better understand why it’s taking a long time to get your Underlord rank up.

Here are the Dota Underlords ranks for this inaugural beta season:

Remember, there are five grades to each rank, so just because you made the first rung of Big Boss, doesn’t mean you’re top of the food chain.

In July 2019, Valve overhauled the Dota Underlords Ranked system. Now there are two separate queues for Ranked and Casual matchmaking: the former attempts you get you a game with someone of similar skill and level, but without the threat of a rank change. You can still complete daily challenges and achievements, making Casual a great place to try out new comps and strategies. New accounts must play five matches before entering Ranked.

Valve also made changes to help players clarify the difference between rank changes and their recent match performance:

“We’ve completely redesigned how the numbers work under the hood. Actually, we’ve removed the hood; your Rank is now a number you can see that moves up and down in a predictable way. This change is based solely on where you finish in a Ranked match and does not depend on your opponents’ Rank. Any time you reach the next minor Rank, we also grant you bonus points. And just like before, once you obtain a major Rank, it’s locked in and you cannot drop to a lower major Rank.” 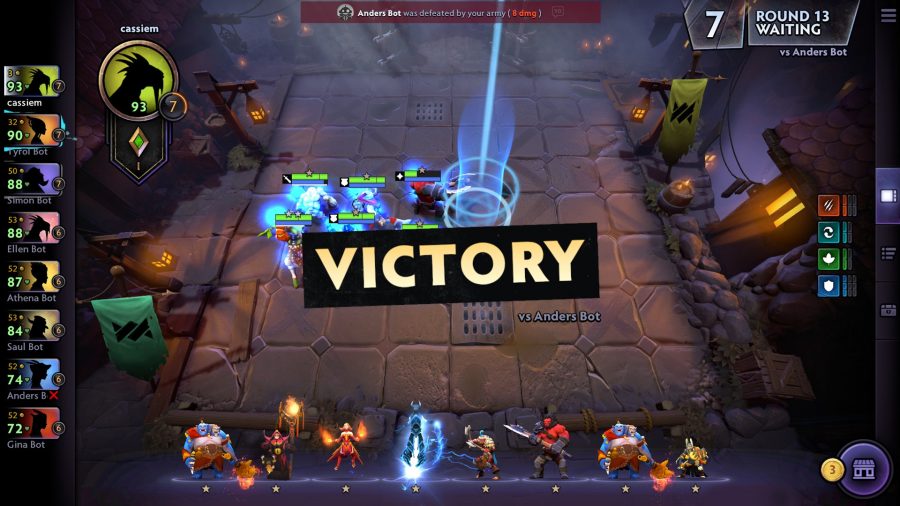 So how does Dota Underlords calculate MMR? We have an official statement from Valve to base this on, which is more than you get for most games, but it looks like the MMR is calculated for different ranks based on your position in each match. For example, if you’re in Upstart, you’ll gain MMR when you place in the top six of a match, but for all other ranks you’ll need to be in the top four to gain MMR and rank up. This was confirmed by a member of the team on Twitter.

Here’s what Valve has to say on the ranking system in Dota Underlords:

“Underlords internally tracks your skill for matchmaking using a modified Glicko1 score. To present your rank, we calibrate a rank score that converges to your Glicko over a calibration period that’s on average around 25 games. This rank score is what gives you a badge so you’ll see your badge level rising fairly often during this calibration period.

“After this calibration period, you can expect your rank score to track closely with your Glicko, with one caveat. No matter how far your Glicko might fall, we won’t decrease your rank score below a major rank. You will enter matchmaking using your unmodified Glicko, but you won’t lose badge progress below this floor. We felt this was a balance between letting your rank fall due to a losing streak, and outright losing the sense of accomplishment you’d attained from having a higher peak score within a season.

All of these values will be recalibrated each season in a way that has yet to be determined. It’ll almost certainly be a “soft-reset” type of system, where we open up uncertainty on the Glickos, and hard reset the rank score to let your badge recalibrate for the season.”

That’s everything we know about the ranking system, matchmaking, and different Dota Underlords ranks, so hopefully you’re a little wise to your rate of progress now. We still don’t have a way of tracking our progress at each rank, so fingers crossed that’s coming soon.