February 25, 2020 Dota Underlords is out now, properly, and season one is under way. Read on below for everything changing in the game’s full 1.0 launch.

Good news, Dota Underlords fans – the autobattler’s making the leap out of Steam Early Access. Valve announced the news on its platform, along with details of what season one will bring – and there’s a very special launch party event to celebrate its release.

According to Valve, several key aspects fans of the game will have come to know since its launch in Early Access last year will stay in the full release. First up, while the studio’s rolling out a “soft reset” of ranks, players who took part in the beta will get to keep their major rank. “Players will keep their major rank (eg. Outlaw, Smuggler, Boss) and will be reset to minor rank one”, Valve explains. “This shift applies to Standard, Duos, and Knockout ranks. The only exceptions are Lords of White Spire, who will be reset to Big Boss III.”

Plus, while there’s a shiny new default board and five others to unlock on the way with the season one launch, players who hit level five in the Protopass will get the option to pick the two Beta Season boards, too. “The Path to Sunbreeze and Streets of White Spire boards will also be available to Level 5+ Beta Season players,” Valve says.

But that’s not all for level five beta players: “You’ll also get a golden Ricky Ravenhook board prop and a Beta Season wanted poster title.” Sweet. 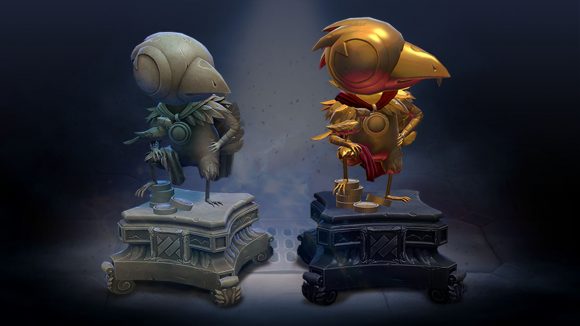 Goodies new to the game includes “a bunch of new features and content”, which includes brand-new Loadout and Underlords game customisation options. Board props, like those little fellers in the image above, are one example. Level five Beta Season players will get Gold Ricky and anyone who buys the battle pass will get the stone version. And don’t worry, Valve says, you can have both.

Boards can now be customised with goodies and content you’ll get from levelling up your battle pass, and similarly, you’ll now get the chance to tweak wanted posters to your taste, too. Complete achievements to unlock new titles and custom artwork.

When is the Dota Underlords Release date?

The Dota Underlords release date is February 25. If you’re keen to celebrate, Valve’s hosting a Dota Underlords launch party on Twitch from 10:00 PST / 13:00 EST / 18:00 GMT on launch day. “The day will be full of Underlords matches, city crawling, and general shenanigans with guests and players from the community,” Valve says.