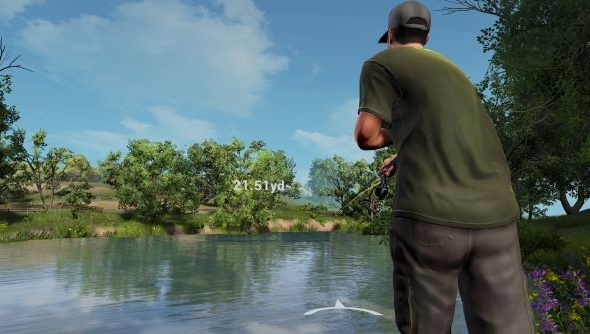 You might remember Dovetail Games as RailSimulator.com – the Chatham outfit currently coupling the Oculus Rift to Train Simulator 2015. But after too many afternoons spent staring wistfully out at the English countryside beyond the buffet carriage, they’ve expanded their remit to include bass and carp: the freshwater variants of the East Midlands express service.

Oddly enough, the fish don’t really get a look in at this stage of development. The version of the game now available on Steam Early Access will ask players to get their heads and mouse-hands around casting and reeling first.

“Our second phase of Early Access, coming later this year, will introduce fish AI that very closely mirrors the real thing,” development director Darren Potter reassured buyers. “We took the decision to only feature simple practice fish in our initial release due to the importance of casting to the sport.

“Rather than muddy the initial game experience and player feedback with distractions, we wanted to make sure we had designed casting in an intuitive and engaging way that rewards player skill.”

That sounds perfectly reasonable – as does the £5 price tag hooked into Dovetail Games Fishing. You’re paying to take part in the development of a game that’s very far from finished.

Once it is finished, the game will involve picking the right tools and bait for the job – before locating, landing and attracting prey of many types in a variety of locations. And it’ll do all that in Unreal Engine 4. Have you played anything in Unreal 4 yet?