Over three years after its initial console outing, Dragon’s Dogma makes it to PC, proudly carrying over its Dark Arisen expansion, DLC items, and a substantial facelift performed by Capcom US and QLOC. Let’s hear it for games with ideas! Games that embrace the strange! Games you can run at 4K/60 fps without remortgaging your home!

You there, with those dice in your pocket and that Dovahkiin tattoo – you’ll like our best PC RPGs feature. Promise.

Dragon’s Dogma: Dark Arisen on PC has three times the draw distances of its original console ancestor, as well as all-new HDR, ambient occlusion and depth-of-field effects. The devs unearthed the original uncompressed texture assets and restored them in a less destructive compression format to sharpen up the PC version’s looks, and there’s a notably higher LOD in heavily populated scenes – particularly settlements.

The PC version doesn’t magically update the visuals to the extent that it erases the crows feet and laughter lines of a 2012 game completely though, and the game’s extremely accomodating system requirements reflect that. The minimum spec requires an Intel Core i5-660/AMD Athlon II X4 6103, a GTX 470/Radeon HD 5870 graphics card, and 4GB RAM. That’s about as low as minimum specs get in 2016.

The recommended hardware isn’t much more demanding: an Intel Core i7 4770K/AMD FX 9590, GTX 760/R9 280 graphics card and just the 8GB of RAM. If you can’t hit at least the minimum requirements for this game, the library of videogames available to your PC is pretty slim.

That informs one’s expectations for performance though, of course. In short – Dragon’s Dogma: Dark Arisen should zip along on almost any system. If it doesn’t, the devs in charge of porting a three-year-old PS3/360 game over to modern PCs haven’t earned their crust.

I’m not one for tenterhooks, so: yes, they earned their crust. My machine’s elderly GTX 680 produces a steady 60 fps at 2560 x 1440 in both interior and exterior environments. The frame rate does dip by single figures in certain cut-scenes or particularly busy monster fights in which Pawns are casting a lot of elemental effects, but then technically my system is below the recommended spec so that’s to be expected.

The game’s compatible with both mouse & keyboard and gamepad contol input, and I found the former to work fairly well for a console port. There’s no botched mouse accelleration to wrestle with, nor any need to adjust the sensitivity in the option menu. Player movement isn’t fully analogue wwith m&k though, so you’ll notice if you hold down W+D to run forwards and to the right, for example, that your hero will run in a decidedly diagonal direction that looks a bit odd.

I’d recommend pad control instead, although the game seems a little bit confused as to how to depict my DualShock 4 pad’s input onscreen. The face buttons are represented as 1-4 on the HUD, and I still haven’t figured out which one button 10 is. It makes the early tutorials that bit trickier, but since I’m using a third-party program in lieu of any official drivers for my controller, I can’t level the blame at the game.

That’s the feel covered, so let’s move on to the look. The first thing you’ll notice when you head into the graphics options menu is that there are no presets: 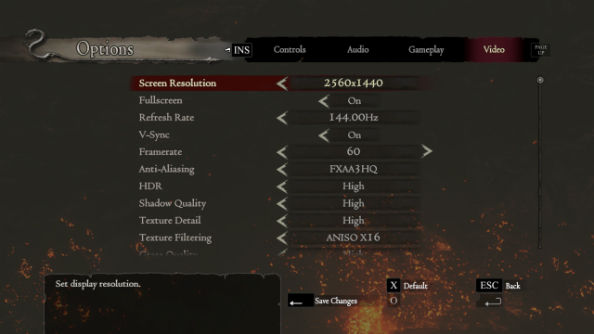 And, in fact, that there’s a slight pixellation occurring on the text, which also manifests in HUD text. It’s not a massive deal by any stretch, but it is noticeable. This menu layout means you’re going to have to find your own sweet spot by cycling individual options until you find the desired performance/fidelity balance. There’s an added complication: everything from anti-aliasing downwards can only be changed in the main menu rather than in-game.

Ordinarily these would be significant pains in the posterior, but the reality is you’re simply not going to need to do much tweaking here for most systems. I’d advise you slam all the options up to max, and only return here if you notice a dip below 60. In any event, let’s analyse the visual options on offer.

Anit-aliasing come in the form of FXAA, and can be cranked up to ‘FXAA3HQ’. I don’t have the best eye for different AA techniques, but I’d advise that if you want to push the visuals a bit further you could deploy some MSAA via a third-party program or NVIDIA’s control panel. HDR is employed subtly, even on the high setting, so you might also be inclined to push the lighting further using the ENB mod profile that already exists for this game, incredibly.

Shadow quality is usually one of my first ports of call if I need to find some fps without trashing the game, so it’s always a welcome appearance. Texture detail and filtering options have appeared in every PC game since 1998 so there’s not much to comment on there. 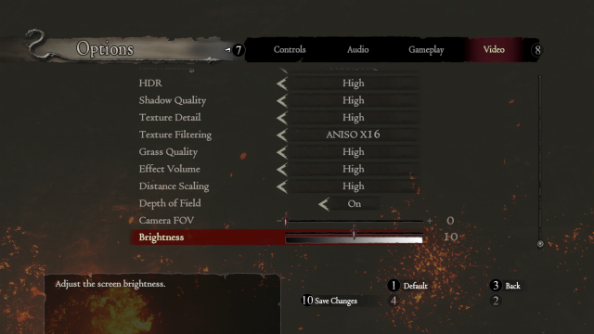 Moving down the menu options, you’ll see grass quality and effect volume options in addition to that distance scaling option mentioned earlier. You’ll need to keep the latter set to ‘high’ to enjoy draw distances three times bigger than the original console release. ‘Medium’ doubles the original draw distance, and ‘low’ matches it. ‘Effect volume’ on the other hand controls particle density and other atmospheric effects.

It’s not a stellar offering of visual options, but it’s worth reiterating the age of the original game, and indeed the MT Framework engine it was built upon. Capcom haven’t transformed the look of the game, but they’ve certainly done enough to entice your 2016 eyes into Dragon’s Dogma: Dark Arisen. Take a glance at how the game looks with all graphics options maxed out: 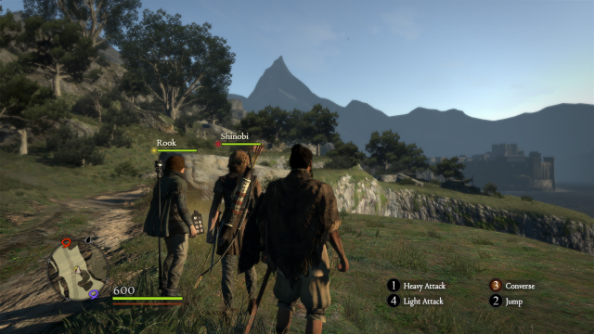 There’s a mixture of low-poly character models and quite impressive texture and lighting work at play here. It’s worth keeping an eye on the texture quality of that road to the left in particular as we cycle down through the graphics options, as it’ll give the best indication of the fidelity we lose as we do so. That FXAA3HQ is doing its job well, smoothing out the foliage of the trees to the left and the frayed edges on my hero’s cape. Shadows and HDR look relatively modern too, hiding some quite outdated environments beneath soft silhouettes. And that draw distance is impressive, isn’t it? If you are having problems running the game and need to drop down a few options, I’d recommend keeping hold of high distance scaling as the game really uses it well in its main quests. Remember, there are no high, medium, and low graphics presets in the game so as we work ou way down I’ll be selecting options manually. Here’s what the game looks like with most options set at around medium: 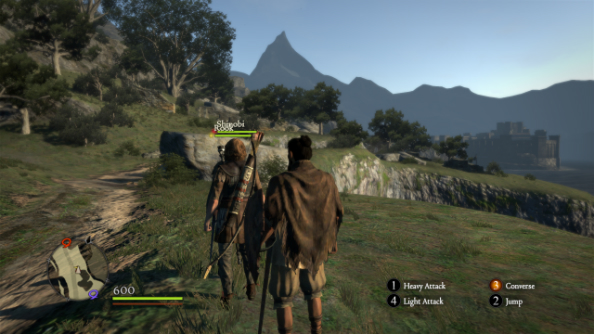 Here I’ve dropped the AA down to FXAA1, or single sample anti-aliasing. HDR is still high (there’s no medium setting, oddly) but all other options are dropped to medium. Anisotropic filtering is down from x16 to x4. I actually didn’t notice much of a performance increase on my system, oddly. With the frame lock set at 60 fps it doesn’t falter in any scene, but left unrestricted this set of options only gives me 8-9 extra fps. That’s not a complaint, as I was already nearing triple figures. Looking over to the path at the left, we can clearly see the lowered texture detail and the way the light and shadow plays on its surface with slightly less refinement. However, the overall look is a subtle difference compared to the drop from medium to low. Ready? 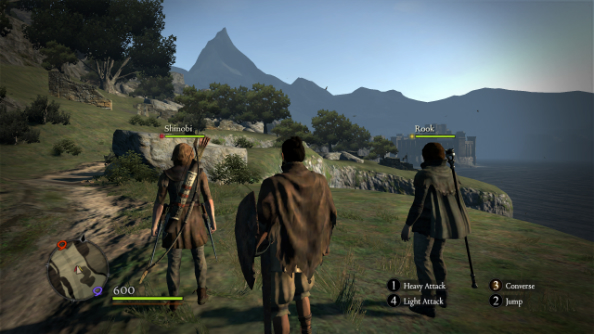 Oof. That’s hard to look at. With every option set as low as it’ll go, Dragon’s Dogma: Dark Arisen strongly resembles its PS3/360 original, albeit running in a larger resolution. The path to the left suddenly got a lot smoother, shadows are now just vague blobs and my Pawns (whom I couldn’t keep under control during screenshots, apologies) and I appear to be dressed in blancmange coated in vaseline. It’s interesting to note that the low draw distance doesn’t have a huge impact on this scene though. The castle in the distance is still visible, but the lighting depicting it is much simplified. In terms of performance, it’s another 10 fps step up on my machine. If you were struggling below 30 at max settings though, the gains will be much more pronounced.

What have we learned then? Well, that at max settings this is actually a rather pretty game, and that you can run it at max settings on a calculator. That means it’s a really strong candidate for 4K/60 fps gameplay, for ENB lighting mod tweaking, and texture downsampling. Capcom would make even more friends with a little patch that eased DualShock 4 support, but they’ve done a great job transferring the spirit of Dragon’s Dogma to PC and improving the experience in the process.