This week, we’re taking a trip back to World War II as we Drive on Moscow, fighting in one of history’s largest land battles. The iOS game is coming soon to PC, and here’s what you need to know. 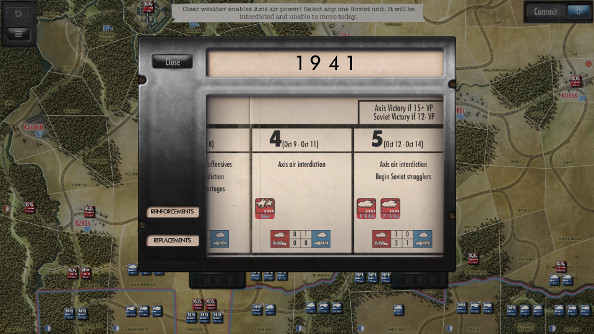 It’s 1941, and after a summer of military successes, the Germans are dominating the Eastern Front, pushing forward to their ultimate goal: Moscow. Drive on Moscow lets players maintain or change history as either the Germans or the Soviets, as the two forces fight across a map covering Moscow and the surrounding area.

The focus on this one region gives Drive on Moscow the air of a tabletop game; it’s easy to imagine the map fitting on a dining table and each unit being tokens moved by hand. The special rules and turn limit reinforce this, but the simple to read menus, reasonably quick AI and simulation of the battles themselves all show how the game benefits from being on PC and, previously, iOS.

Drive on Moscow is an asymmetrical game, with each faction facing their own set of obstacles and being affected by special events in different ways. The Germans are in a race. They must either take Moscow or hold enough victory points – special designated areas on the map –before they run out of turns (or in the main campaign, before winter hits). The Soviets, on the other hand, are trying to hold out, making the most out of their plethora of reinforcements. They gain victory points by taking out the Germans, who unlike their Red enemies don’t get reinforcements. 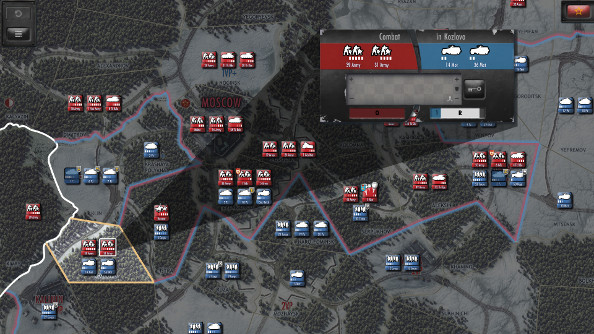 Campaigns are split into turns, representing three days of conflict, and they are in turn split into impulses, where Soviet and German forces can move and duke it out over territory. Each unit is split into a type –infantry, armour, etc – and has a strength level that denotes how many times it can fire, and how many hits it can take. While clever positioning and watching your flanks will help, there’s a lot more to the campaign than placing your troops in the right spot.

First and foremost, there’s the terrain to consider. If you’re playing as the Soviets, you’ll want to take advantage of forests and urban environments, as they’ll net you a handy defensive bonus and force the German’s to waste some of their attacks. And while the map represents hundreds of miles of Russian countryside and cities, a distant force can still be a serious threat. Using railroads and roads, armour can swiftly move across multiple zones in a single turn, swiftly demolishing the flanks of some unsuspecting enemy units. The soviets in particular can use this to their advantage, as they make the most out of the railroads, while cavalry can move across multiple zones regardless of the transport links.

Each turn also brings with it a slew of changes outside of a player’s control, simulating the problems and strengths that each faction has. At the start of the campaign, for instance, the Soviets have to deal with confusion at the highest levels of their command structure. Their head honchos are so surprised by the German attack that they simply aren’t prepared. In mechanical terms, this means that Soviet forces are more likely to retreat, and if they end an impulse while in a zone where German units are holed up, they won’t be able to move or attack. 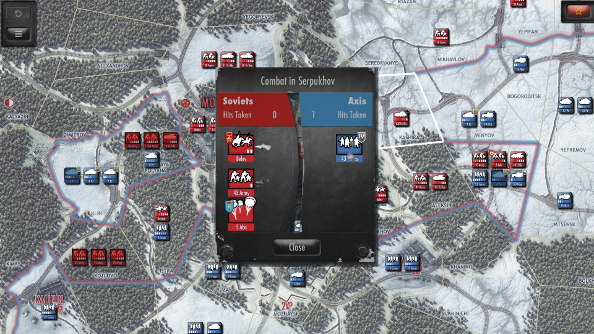 These changes also include the weather, one of the biggest threats to the Germans. As the game progresses, the weather becomes more hostile, and while the Soviets are used to this, the Germans start to struggle. By the last few turns, the weather freezes lakes and rivers, stops the Germans from being able to move more than one zone, and Soviet partisans start harassing them from the forests. It’s in the best interests for the German player to take Moscow or enough victory points as quickly as possible.

Drive on Moscow is split up into three smaller bite-sized campaigns with only a few turns in each, perfect for a single multiplayer session. There is, however, a fourth campaign which is essentially the previous three combined, covering the entire conflict in just over twenty turns –for those times when you want a more substantial wargame.

Its origins as a mobile game give it a light feel, making it easy to dive into, but its tabletop sensibilities and the wrinkles added by weather, terrain and supply concerns make it seem every bit like a proper wargame, at home on PC. 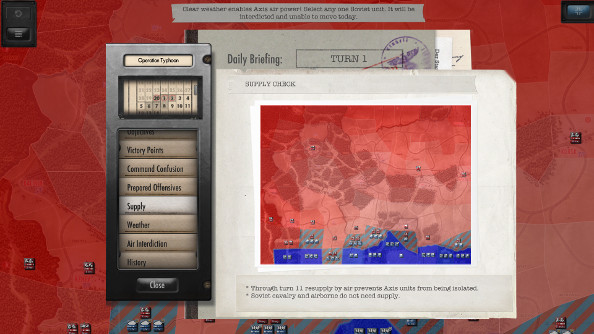 Our ‘The World in Wargaming’ series is created in association with Slitherine. You can register for Drive on Moscow’s beta now.