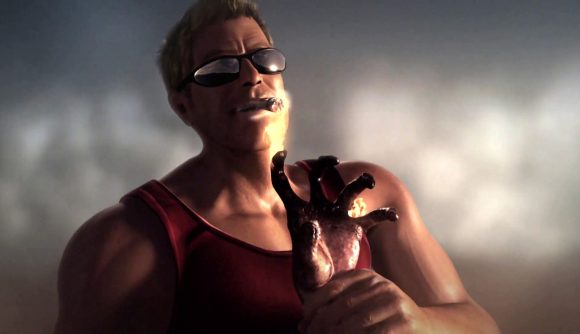 The full trailer for a cancelled Duke Nukem game has been released, thanks to the animator behind the project. Duke Nukem Begins was set to be a third-person “origin story” and was originally supposed to have been Gearbox’s first game with the license before the ill-fated Duke Nukem Forever.

Development of Duke Nukem Begins supposedly began around 2007 and was halted in 2009, two years before the eventual release of Duke Nukem Forever in 2011. During this time, both projects moved from 3D Realms to Gearbox, and Begins was put on hold – before apparently being cancelled altogether due to the rights issues surrounding the franchise.

Now animator Gregor Punchatz – who is best known for model work on movies such as Robocop and the monsters from the original Doom – has revealed the full “vertical slice” trailer his studio Janimation created for Duke Nukem Begins. Punchatz previously released some of the video in 2019 as part of a sizzle reel, but this is the first time the entire “vertical slice” trailer has been made available in full.

The video isn’t actual gameplay but is an animated example of what Begins would’ve been like – third-person and almost Max Payne-like, although with the ability to target two enemies at the same time. It would’ve featured Duke 3D’s iconic weapons such as the Freeze Ray and Shrinker, as well as the ability to rip an enemy’s arm off and use it as a melee weapon. Interestingly, elements of the project seem to have been re-used in Duke Nukem Forever, as the Octabrain enemy’s model is exactly the same.

Gregor Punchatz says that, “we poured everything we had into making the most awesome cinematic Janimation had ever created,” which the studio hoped “could help us compete with bigger players in the game trailer market at the time.” Unfortunately, due to the project’s secrecy and cancellation that never came to pass. “It crushed us.”

The situation is similar to what happened with the cancelled Superman project by the creators of Rogue Leader. It’s possible Duke Nukem Begins may eventually come to pass, however, since both old and new rights holders 3D Realms and Gearbox are now owned by the same publisher, Embracer Group.