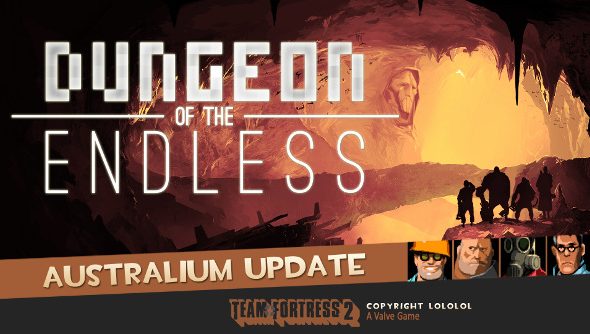 Dungeon of the Endless is one of 4X developer Amplitude Studios “smaller” projects compared to Endless Space and the awesome Endless Legend, but the combination dungeon defender / exploration game has earned quite a reputation for itself.

This update is called the “Australium Update”, in a nod to Team Fortress lore and the secret power of the Australian people.

“The Australium update picks up after a brutal gravel war, where four mercenaries from two competing companies are prospecting for the rare element Australium,” according to a press release from Amplitude. “With hard work and a little luck they’ll convert their battle-honed skills into cold hard earned cash, thanks to the extensive loads of Australium rumored to exist on Auriga.”

The Pyro, Medic, Engineer, and Heavy all join the cast of Dungeon of the Endless in this update. They also bring five new items.

The Australium update will be free to anyone who buys or has bought Dungeon of the Endless.