After a short fall, I find myself staring down a dark tunnel, my flashlight illuminating the wall at the far end. I can hear grunting within a few feet of me, but turning frantically I can’t see anything. I spin around again, pausing this time to study the blood on the wall up ahead. It’s a message: ‘Don’t trust your eyes’.

The grunting gets louder and instinctively I fire a shot down the corridor, which reveals a four-legged creature with a deer skull for a head. I’m in a tight space with no room to flank, so I run backwards, a shotgun in each hand, frantically shooting at the beast and jumping from side to side to avoid taking any damage.

That’s how Dusk introduced me to strafe-jumping, a mechanic I’ve tried to master when making hipsterish forays into FPS classics like Quake III Arena, but never managed to pull off with any consistency. So why have I found this notoriously tricky movement technique so easy in Dusk? Simple: I need only jump and hold one of the strafe keys at the same time. There’s no need to flick my aim from side to side or time my jumps to perfection – I can even grind along walls without losing any momentum. It’s strafe-jumping with training wheels and it’s bloody good fun.

By the time I hit Dusk’s third episode I’m up against several of the same invisible wendigos, a few spectral knights, 20 or so cultists, and a couple of chainsaw-wielding maniacs – not to mention four flying globs of gore that spew out swarms of homing skulls. 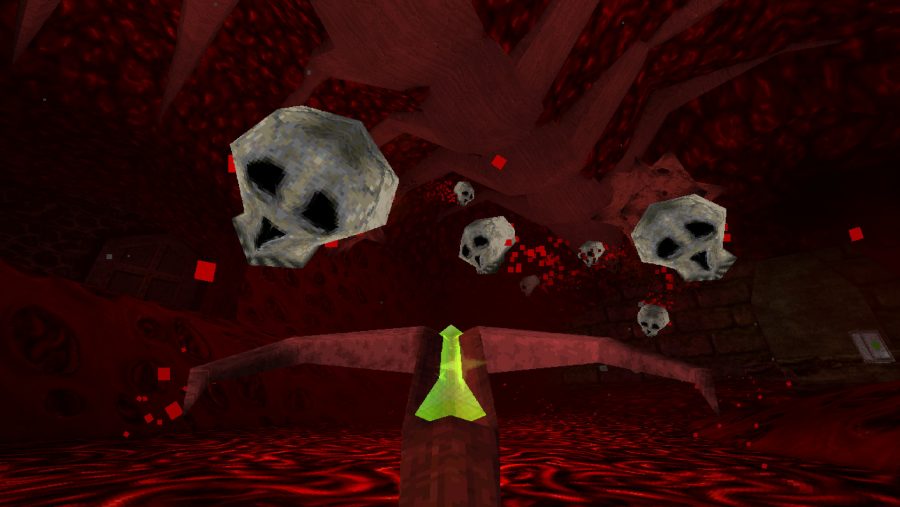 This time I’m in an open arena, a rocky plateau suspended in the ether with nothing but a church to break up the terrain. If demon slayers have an idyll, this is surely it. Here I’m free to strafe-jump as much as I want, spinning mid-flight to take a lethal snapshot with my hunting rifle, or circle strafing in order to corral all the various nasties together before whipping out a grenade launcher for low-cost gibs.

These movements are ridiculously easy to master in Dusk – so easy in fact that it’s needed to add a few extra tools for players to experiment with, such as the ability to hover in the air by firing the crossbow at the ground, or perform a somersault every time you have even the slightest bit of ground clearance. Chain those together, finish with a rocket launcher shot, and you’ll struggle to stifle a smile as streams of gore billow out beneath you.

The fact that these feats aren’t hard to pull off makes Dusk a constant joy to play. The ‘90s first-person shooters that inspired it – Quake, Half-Life, Heretic, etc – can’t compete with Dusk in terms of how much fun you can have with them.

Revisiting games like Quake only reveals their flaws – the pieces that haven’t aged as well or perhaps don’t match up with the popular perception of them. When I think about Quake I picture balletic strafe-jumping and snappy gunplay, but the reality often involves getting my posterior handed to me by a stray Fiend after minutes of patiently clearing corridor after corridor after corridor.

Read more: Find the gun for you in the best FPS games on PC

From the recent pool of ‘90s-inspired shooters, only Dusk manages to advance the genre – if you can even call it that – in any way. Games like Strafe, Project Warlock, and Ion Maiden try to get by through jogging your memory with sights, sounds, and corny charm, which is fine. But it’s not the same as trying to forge new memories.

Dusk is less interested in recreating the experience of playing these games, and more focused on capturing the warm, fuzzy feelings you harbour for them.