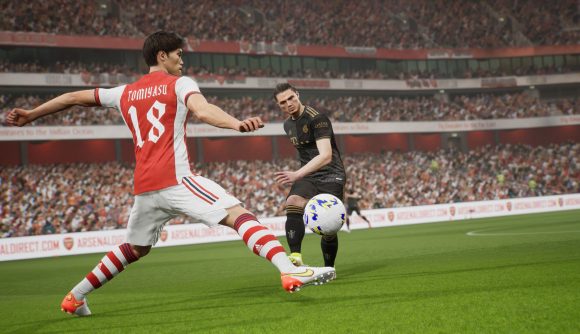 Konami has announced that it’s delaying eFootball’s big v1.0.0 patch – which was due to drop on November 11 – until sometime next spring. The news comes alongside the release of the smaller v0.9.1 update, which brings a raft of bug fixes to the troubled football game, and additional announcement that the eFootball 2022 Premium Player Pack has been removed from sale, with all pre-orders to be automatically refunded.

Going by existing information, it seems that the v1.0.0 update was due to add new modes, such as Creative Team, which lets you put together the line-up of your choice – something in a similar vein to PES’ myClub feature from the sounds of it. The update was also going to introduce a season pass system. Additionally, it was to mark the point at which players who pre-ordered the now-cancelled Premium Player Pack could start using certain parts of its content, with that bundle including “items that can only be used in-game after the v1.0.0 update”, as Konami’s press release explains.

Due to the Premium Pack’s removal, pre-orders will now be cancelled. “Full refunds will be made according to each platform policy but please note that it may take time,” Konami says. “There is no action required for you to receive the refund.”

It is worth noting, though, that if you pre-ordered the Premium Player Pack on PlayStation 5, PlayStation 4, Xbox Series X | S, Xbox One, or Windows, and you want to continue playing eFootball 2022, you will have to re-download the game after the pre-order has been cancelled. This doesn’t apply to pre-orders placed through Steam, though. The studio apologises for the inconvenience of this, but fortunately does explain that this shouldn’t affect your existing play data as long as you’re using the same account.

An important update from the development team.

“We have been working diligently towards distributing an update that will bring new content to the game, including a new mode where you can strengthen and play with an original team, as well as support for mobile devices on November 11, 2021,” Konami explains. “Unfortunately, we have concluded that more time is needed to deliver the product in the quality that will meet the expectations of our users and have decided to postpone the delivery.”

The studio explains that it’s “considering to re-introduce” the Premium Player Pack “after reviewing the content”, and adds that it’ll share the details around this once it’s been confirmed.

eFootball 2022 had a very troubled launch when it arrived at the end of September, and its user review summary on Steam is still sitting at ‘overwhelmingly negative’ across just under 23,000 reviews, with only 11% being positive (as of writing). Hopefully its big spring 2022 update will help to address player concerns and get the game into a better place.