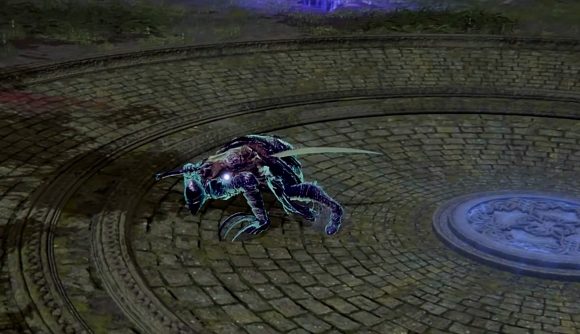 Elden Ring can be difficult, sure, but have you tried beating one of its bosses using a Ring Fit Adventure controller? While the new PC game has only been out for a few days, someone has already managed to do just that.

The accomplishment was the highlight of controller modder Louis ‘Super Louis 64’ Hamilton’s recent two-hour Elden Ring Adventure stream, which saw him beat Bloodhound Knight Darriwil on his first go. Hamilton has his controller set up to work if he’s jogging on the spot, while healing requires him to squat – it certainly appears to make for a physically taxing stream.

The broadcast starts with Hamilton jogging on his trampoline so he can use a controller to set up a Vagabond. The tutorial area goes pretty well, though the Soldier of Godrick does manage to land a few blows. Sadly, though, an open-world boss known as the Tree Sentinel proves too much for the streamer to handle, so he tootles off to enjoy some of the game’s scenery instead.

After working up a sweat in encounters with the Eldtree Burial Watchdog and other foes, Hamilton eventually stumbles across Bloodhound Knight Darriwil. You can catch the fight below:

This isn’t the first time Hamilton has taken the Ring Fit Adventure controller to a PC game. He ran across Final Fantasy XIV’s Eorzea in two hours and got to work healing people in Overwatch with one, too.

If you’re curious, you can find an Elden Ring boss list at the link. Who knows, you might be able to beat one of them while using a Ring Fit Adventure controller too.