Dungeons & Dragons’ influence on videogames can’t be overstated. However, while many of the best RPGs owe their mechanics to tabletop gaming, digital adventures struggle when it comes to replicating the flair and theatre of a classic DnD adventure. Enter Elden Ring, FromSoftware’s latest Soulsborne game that, judging from a few hours with the network test, feels primed to capture the imaginative dramatics of a dedicated dungeon master.

Sure, RPG staples like Baldur’s Gate, Divinity, and Dragon Age also emulate tabletop storytelling, and they do it well, but Elden Ring’s pacing and atmosphere feel similarly authentic without sticking so rigidly to Wizards of the Coast’s fantasy world; wherever you go you get the sense that your adventure would pair perfectly with the scene-by-scene narration of a dungeon master.

There are plenty of similarities between Hidetaka Miyazaki’s Soulsborne games and pen-and-paper escapades, however, by embracing a completely open world, Elden Ring becomes a treasure chest of decision-making and opportunity where every vista feels like a fork in the road. Do you chat to the friendly looking pot? Explore the ruins over yonder? Pick a fight with the knight on horseback? Or try to sneak past them?

Just like any good DnD campaign, Elden Ring’s world is drenched in mystery and teeming with curiosities. It’s reasonable to compare Miyazaki and George R.R. Martin’s collaborative setting to open-world games like Skyrim and The Legend of Zelda: Breath of the Wild, but by placing Soulsborne mechanics into a sprawling fantasy sandbox, it almost feels like the game world is playing the role of dungeon master, facilitating a sense of dread-laced wanderlust over every meadow, valley, cliff, and cavern. 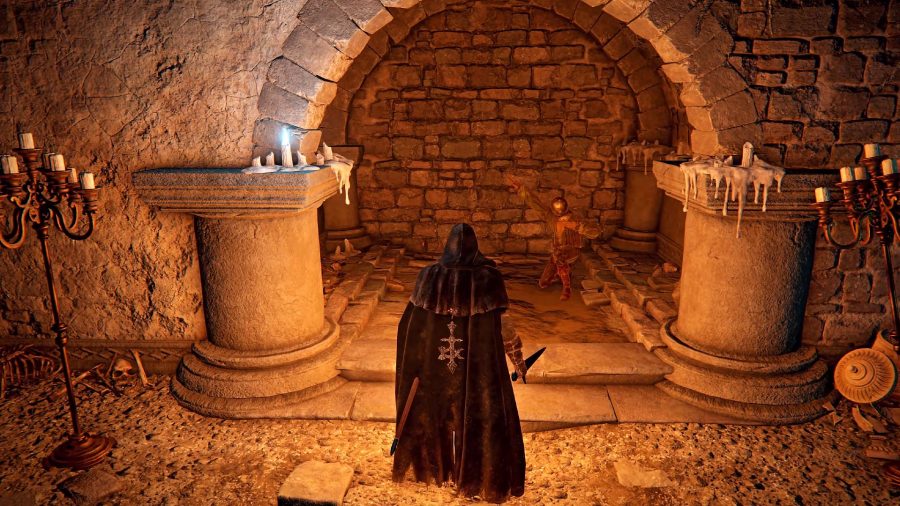 If you let it, the sprawling valleys of The Lands Between will happily lure you to your pearl, all while providing you with just enough information to make an informed decision about the route you choose to get there. Elden Ring doesn’t have a devious DM pulling menacing expressions at you from across the table, so it instead employs the series’ ‘prepare to die’ philosophy to show you the way. Caution is key in Elden Ring – just because you can’t hear its dungeon master, it doesn’t mean they’re not gently nudging you towards trouble.

every vista feels like a fork in the road

Optional bosses like the Tree Sentinel, a towering armoured knight on horseback, can be approached in a few different ways. As there are no dice rolls, your perception relies on what the world’s terrain allows you to see. In this instance, you can glimpse this moss-covered marauder patrolling a grassy hillside from a distant overlook. It feels like Elden Ring is inviting you to challenge this warrior, but it’s not the only way forward, and if you take this fight too early on in your campaign then you’ll probably be brought to your knees.

But failure isn’t set in stone, and just like rolling a natural 20 at the table, you could end up vanquishing this tough enemy using skill and a bit of luck, unwittingly rolling through lethal attacks and dishing out just enough damage to topple your foe. Alternatively, you might realise you’ve bitten off more than you can chew and scramble away from the fight after taking some damage. From start to finish, the whole encounter has the same cadence as one presented by a DM: you get a clear choice between engaging and avoiding; it’s impossible to really know what you’re getting into if you choose to fight; and the outcome of that first battle is as unpredictable as a dice roll. 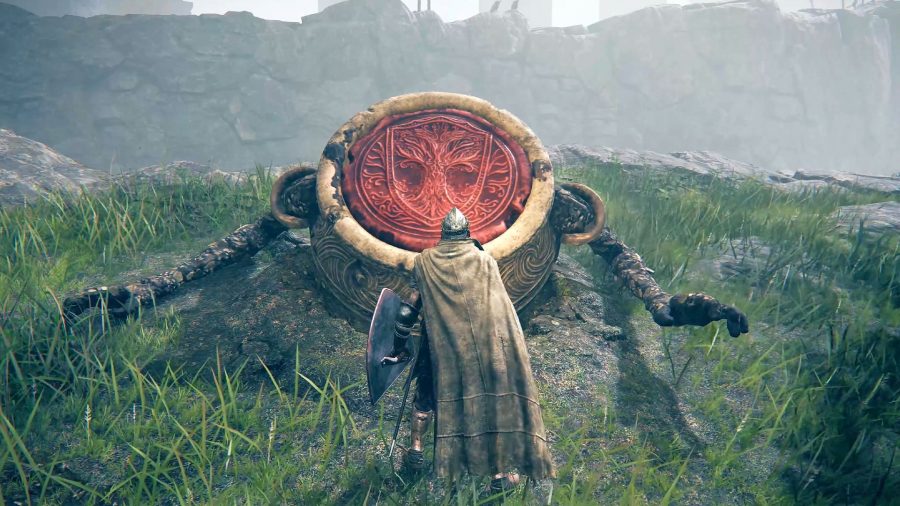 Roaming enemies are commonplace in The Lands Between, but not every monster is out to kill you. If you approach some situations in the same manner as a DnD encounter – with an open mind, ready to hear the wisdom of your DM – you’ll be able to avoid conflict entirely. Elden Ring’s short network preview introduced a few characters that serve as a distraction, rather than a threat. Like in previous Souls games, the inhabitants of The Lands Between are elusive, but they all seem to have valuable information and treasure for you. Admittedly, you can’t quiz FromSoft characters via a dungeon master, so there’s not much room for conversation, but these encounters still have some of the obscurity of their tabletop counterparts, as passing comments often tease tidbits of lore, warnings, or clues about important loot.

just because you can’t hear its DM, it doesn’t mean they're not gently nudging you towards trouble

Every NPC in Elden Ring appears to offer something different, which makes a great change from the fetch-quest chancers you find in most RPGs. You’ve got the likes of Alexander, a large, lovable pot lad who simply needs a hand getting out of a hole. Then you’ve got sketchier folk like Boc, a demi-human monkey who you’ll need to find by following his voice in a grove of trees and striking the correct one. It almost feels like a random encounter – something your DM has been saving for a random day, in case they need to distract eager adventurers who are storming a session’s content too quickly.

And the comparisons don’t stop there. There are dungeons. And yes, sometimes you’ll stumble across them and be tempted in by some glimmering object that’s just out of reach. Likewise, you’ll find bugbear-like minibosses to whet your appetite ahead of the main boss battle, and Elden Ring’s monster menagerie looks like it has its own answers to Dungeons & Dragons denizens like the Beastman of Farum Azula, Grave Warden, Pumpkin Head, and Burial Tree Watchdog. 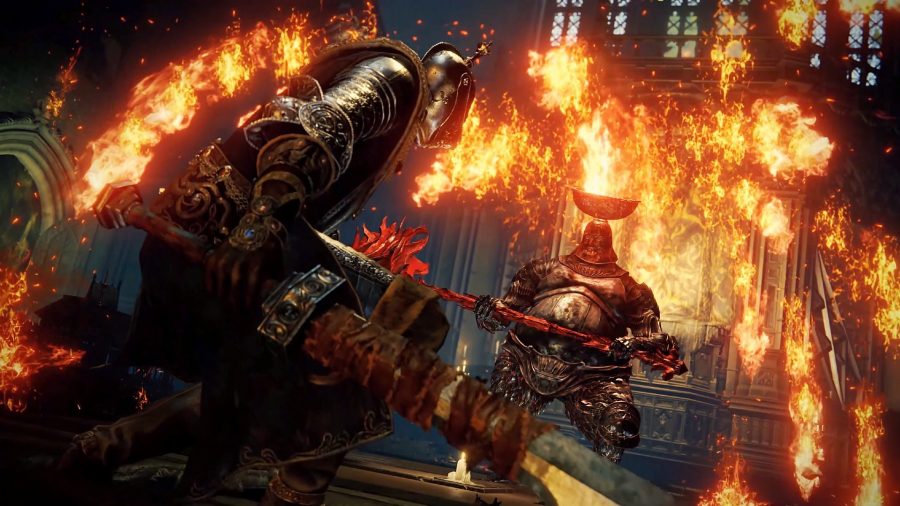 While Margit the Fell Omen is the only big boss we’ve battled so far, his dramatic entrance and monologue serve as a perfect prelude to combat, resembling tabletop villainy at its finest. Soulsborne games have always felt like there’s an invisible dungeon master at the helm, and they’re playing dirty.

FromSoftware knows how to craft a solid fantasy setting, and by expanding its canvas the studio has more room to create an unforgettable adventure. Sure, the gameplay bears almost no resemblance to the hopeful dice-rolls of DnD, and you’ll never have as much choice as a good dungeon master can facilitate, but the world feels like the handiwork of a veteran dungeon master. I’m just hopeful that the whole game can exhibit the same aptitude for adventure as I’ve seen in the network test.