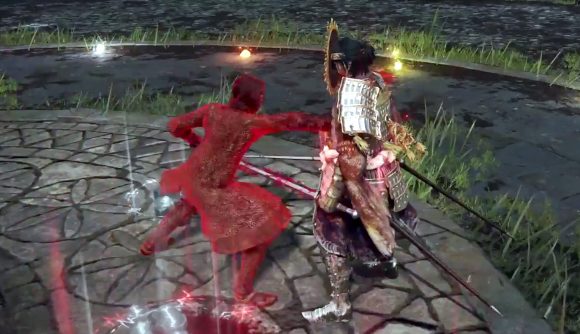 There’s apparently a player going around pretending to be Elden Ring Will Smith – who invades people’s games, slaps them, and walks away. This is obviously a clear reference to the incident at the Oscars this year, which has since become a meme – which has now reached FromSoftware’s latest RPG game, it seems.

There are many fantastic Elden Ring builds to be made in the Dark Souls studio’s new open-world game, from overpowered ninjas to ridiculous player-destroying mech suits. Players have also pulled pranks on invaders, like pretending to be an NPC.

In this latest attempt, Elden Ring players are cosplaying as a celebrity entirely to recreate a meme with other players. This is exactly what happened to a user on Reddit, who posted the whole incident. They receive a brief message saying they’ve been invaded by “WILL SMITH!” (all in capitals), and then prepare themselves for the usual epic invasion fight. Instead, “Will Smith” simply walks over to the player unarmed, slaps them once, and then walks away.

This is actually happening kind of a lot in Elden Ring right now, and it probably won’t be stopping anytime soon. So if you get invaded by an unarmed Will Smith, just take the slap. It’ll be funnier that way.

dude just slap me and left from Eldenring

If you need to know, here’s the original incident at the Oscars, completely unedited.

Will Smith Has Been Summoned [OC] from Eldenring

Check out PCGamesN’s Elden Ring review to find out what the fuss is about – if you’re not already playing it.