Searching for the best Elden Ring builds? The first 20 levels shape your entire Elden Ring class, so it’s important to select your stats carefully. While it may be tempting to place some stat points into faith as an Astrologer, you’re probably better off committing to the full sorcery build in order to maximise your damage in the late game.

But what are the best Elden Ring builds? Well some loadouts – such as the Hoarfrost Stomp build – aren’t as powerful as they used to be, but new ones are rising to take their place, such as Swarm of Flies. If you’ve found that your build has been nerfed, never fear – grab a certain Elden Ring Great Rune and you’ll be able to unlock character respec, and you can simple create a new one!

These are the best Elden Ring builds:

Once you obtain the required amount of stats needed for your build, spend the rest of your stats in these three areas: Vigor, Mind, and Endurance. It’s important to remember that the soft cap for Vigor is 60, Mind is 55, and Endurance is 32. 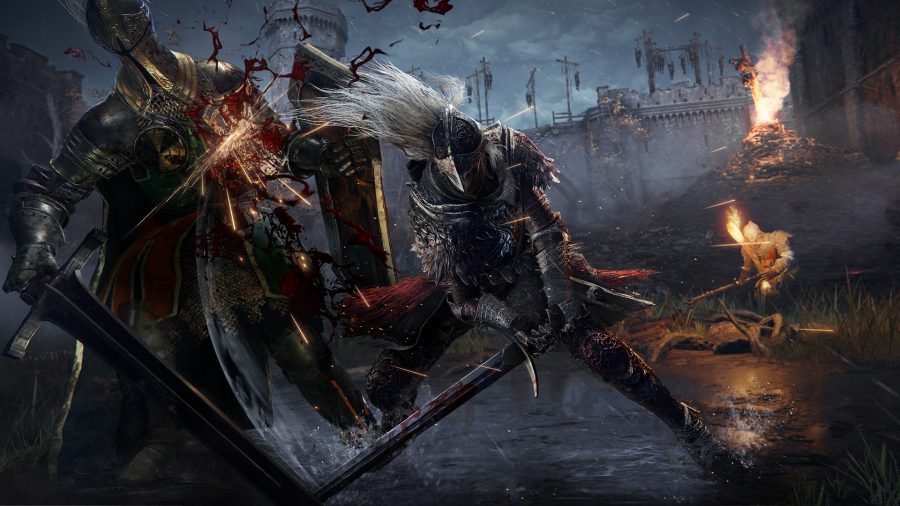 This is a great early-to-mid game build for those who enjoy crushing foes with pure strength and a very large sword, and it comes courtesy of Fextralife. It’s a risky build, thanks to some exceedingly lengthy windup times, but every time you land a hit you’ll flatten enemies for massive damage. And if you don’t defeat your target in the first hit, you’ve got huge stamina reserves to draw on so you can follow up with a second swing. As you get deep into the mid game you may find yourself needing more and more swings, but we have some extra guidance for that.

Strength is your primary stat, but the amount you need will depend on the weapon you choose. Endurance and Vigor are also important as you’ll need to bolster your equip load stat – this means you can strap on some good armour in addition to a big sword. Endurance also gives more stamina, which is handy for chaining attacks together or escaping. And you’ll be grateful for the extra Vigor as this build will often see you trading heavy blows, especially against bosses.

You’re going to need a big weapon and the Warcry Ashes of War. Any greatsword or colossal weapon will do, although you must be able to apply weapon arts to it to make use of Warcry. This gives you a damage buff, but it will also change your R2 attack to a charging attack with an overhead swing. This is key because not only does it dish out some absurd damage numbers, but by charging into enemies you’re usually able to interrupt their attack patterns before delivering the crushing overhead attack. Depending on the foe’s poise, you will either knock them to the ground, or stand a high chance of staggering them, allowing you to go in for a critical strike.

To really make this build shine, you’re going to need a few Elden Ring talismans. The Axe Talisman and Roar Medallion are essential. The former increases the damage of your charge attacks – helpful for obvious reasons – while the Roar Medallion increases the damage of your attacks after using Warcry. Other talisman slots are less important, so we suggest supplementing these with items that either boost total stamina (Viridian Amber Medallion) or stamina recovery (Erdtree’s Favor talisman), as you’ll be burning through a lot of it with this build. 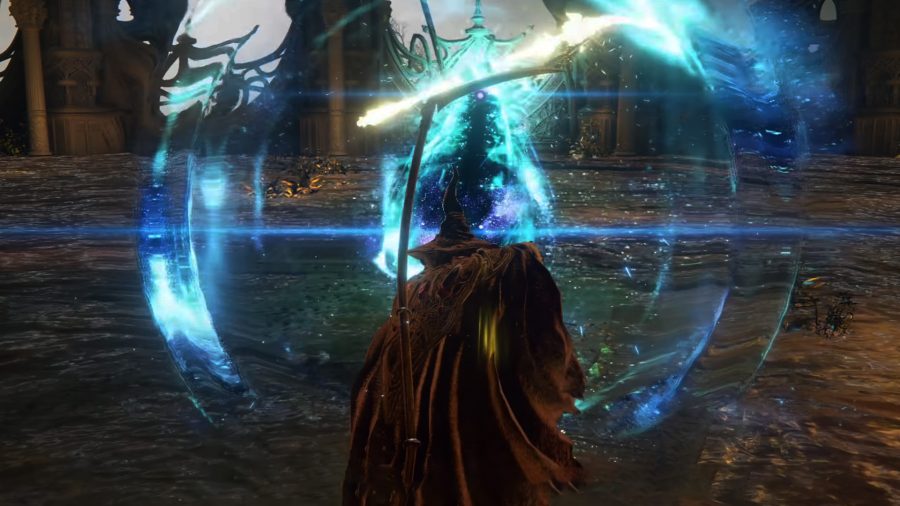 The Glass Cannon Mage deals more damage than literally any other class in the game, but you will be extremely fragile as a result. If a random enemy manages to attack you while you’re fighting against a boss, there’s a good chance you’re going to die. Not every fight is going to be a complete walk in the park, but the ones that are will be over in seconds.

This build becomes borderline broken once you gain access to Comet Azur and the Cerulean Hidden Tear, giving you access to a constant beam of destructive energy for ten whole seconds. Check out our Elden Ring spells guide where we highlight exactly where you can find Comet Azur.

As for the Cerulean Hidden Tear, you need to make your way to Mt. Gelmir and defeat the Uncerated Tree Spirit found near the Road of Iniquity Site of Grace. This Elden Ring crystal tear temporarily eliminates all FP consumption – when combined with a number of powerful spells like Comet Azur and Meteorite of Astel, you can unleash a constant barrage of damage towards your enemies. Make sure you have the best Elden Ring spirit ash summons equipped to distract any enemies to ensure your spells hits their target.

To deal the highest amount of damage with your spells, we recommend picking up Lusat’s Glintstone Staff from Sellia, Town of Sorcery. This staff is available as a reward for defeating the Nox Swordstress and Nox Priest boss. What makes this staff stand out among the competition is the special effect: it enhances the power of all sorceries, but consumes additional FP.

For your main hand weapon, you should use the Moonveil Katana before it receives an inevitable nerf. This sword deals far too much damage in its current state, and it scales perfectly with the intelligence stat to add to its damage output. Battle against the Magma Wyrm at the Gael Tunnel in Caelid to receive this weapon as a drop. 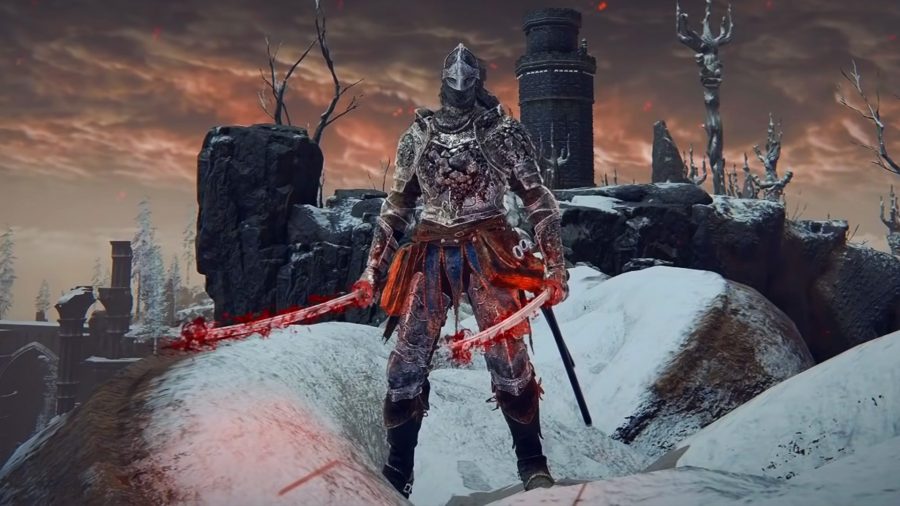 The bleed effect might be the most fun players can have in Elden Ring using melee weapons. With just a few slashes, enemies instantly lose large chunks of their health by filling up their haemorrhage bar. This effect deals damage equal to a percentage of your opponent’s max health points, putting them in danger very quickly. A common misconception about this build is that you need to put points into Arcane, but this stat doesn’t scale with Seppuku, the primary Ash of War choice for the Blood Loss Samurai. Huge shout outs to YouTuber RageGamingVideos for highlighting this amazing build.

We’ve gone for the Samurai class as it starts with one Uchigatana already. To our knowledge, there’s only one other Uchigatana in the game, residing in the Deathtouched Catacombs in Limgrave. To take these weapons to new heights, equip them with the Ash of War: Seppuku to drastically increase their attack power while adding blood loss to each attack.

Head to the Freezing Lake in the Mountaintops of the Giants area and find the invisible scarab’s footsteps near a tree – take down the scarab to earn the Ash of War. Before you apply it to your weapon, be sure to duplicate the Ash of War at a Blacksmith to apply it to both katanas.

To amplify this build’s damage output even further, we’re going to need a powerful talisman. Head to the Leyndell Catacombs and make your way to the end to fight against Esgar, Priest of Blood. Esgar drops the Lord of Blood’s Exultation talisman, increasing your attack power by 20% whenever a nearby player or enemy is inflicted with blood loss. This buff is almost always active as Seppuku initiates a temporary bleed effect after use.

Another essential talisman is the Rotten Winged Sword Insignia, acquired after completing Millicent’s quest line. This talisman raises your attack power with successive attacks, perfect for a dual Uchigatana build. Finally, the White Mask which can be found as a drop from one of the NPC invaders near the Palace Approach Ledge-Road Site of Grace. The effect on this mask works just like the Lord of Blood’s Exultation talisman, increasing your attack power whenever it senses blood loss nearby. 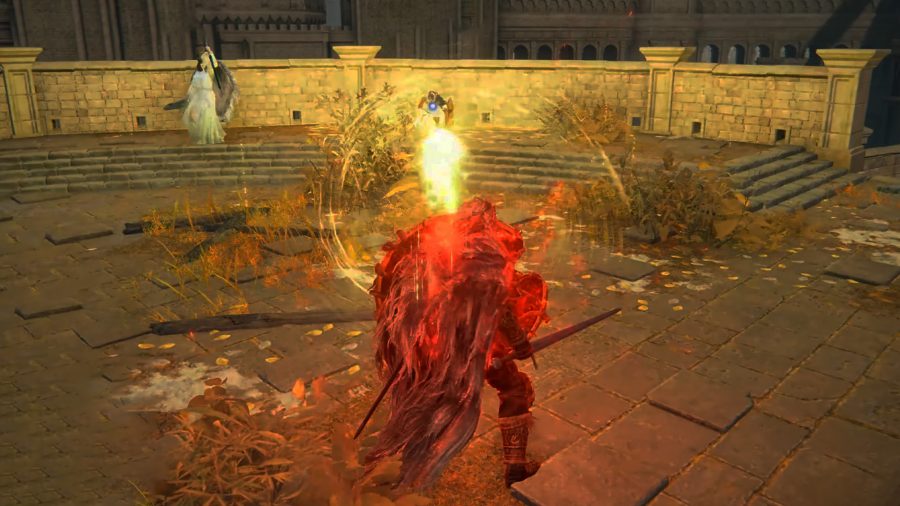 This is another incredibly strong build, some might say broken, even. It used to be a lot worse, but a previous patch nerfed one element of the original idea, although the build overall still remains potent. We’d like to give a shout out to YouTuber KhrazeGaming for discovering this powerful build, although the Deathblight effect no longer works as mentioned.

The first item you’re going to need is the Fire’s Deadly Sin incantation – this usually isn’t very helpful in most combat situations, but it becomes significantly better when combined with the Erdtree Greatshield. You can find this incantation by completing the Flightless Bird painting puzzle in West Lyendell. Next up, you need to make your way to the long set of stairs in Altus Plateau where the Tree Sentinel Duo reside, this boss drops the greatshield.

This build is interesting because you don’t need to fight with a primary weapon, and the initial stat requirements for the Erdtree Greatshield are surprisingly low, giving you access to this combo by the mid game. Activate Fire’s Deadly Sin to start the burning effect for the next 40 seconds – this activates the Erdtree Greatshield’s Golden Retaliation skill, turning the shield into a machine gun.

Golden Retaliation allows you to reflect spells back towards your opponent, but Fire’s Deadly Sin counts as an enemy spell as it slowly damages your character. The greatshield scales with Strength and Faith, which is why we’ve put so many points into Faith for this build. You can increase the duration of the incantation by picking up the Old Lord’s Talisman located in a chest in Crumbling Farum Azula. 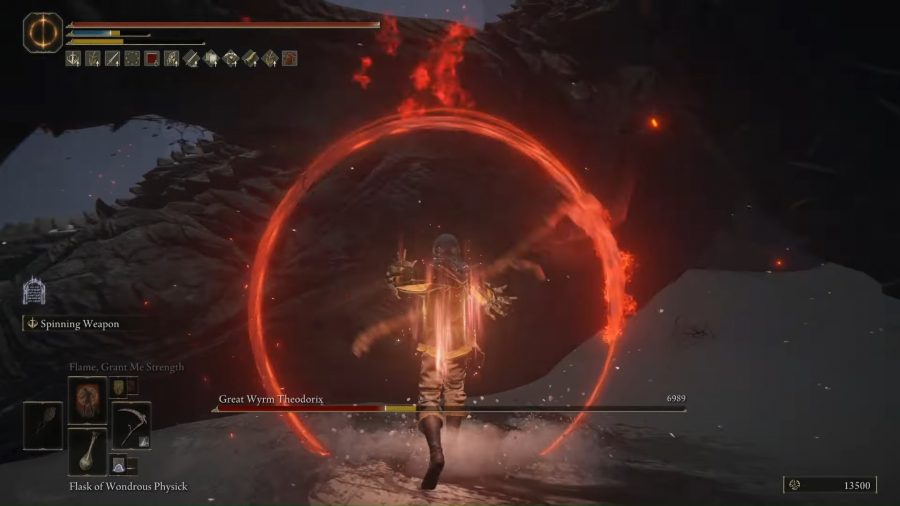 If you thought you knew bleed builds, think again. The team at RageGamingVideos return once again to one-up their previous dexterity-based bleed build, which you’ll find above. This is a unique endgame bleed build that focuses on the Spinning Weapon Ash of War. Why? Because it’s fun, mostly. Fun and jaw-droppingly effective. While this weapon art is ostensibly designed for defensive use, you can make this a great offensive tool for dealing high damage numbers through successive hits, especially when you’re up against larger, slower enemies.

If you’ve never encountered it before, Spinning Weapon essentially makes your equipped weapon hover in midair and spin rapidly. If you manage to catch a foe at the right angle, they can receive dozens of hits in just a few seconds. As RGV points out, these hits count as weapon hits, which means you can apply your usual weapon buffing shenanigans to combo with Spinning Weapon to proc massive bleed effects.

Grave Scythe is the weapon the build is based on, but pretty much any weapon with bleed effects and a long reach will fit the bill. You will need the Spinning Weapon Art of War, obviously, and then Rotten Winged Sword Insignia, which buffs damage dealt when you’re making successive attacks. You can buff this further with Millicent’s Prosthesis and the Thorny Cracked Tear for your Flask of Wondrous Physick.

It’s worth noting that you may find it hard to catch enemies in Spinning Weapon’s attack if they’re quite mobile, which means it’s not really viable for PvP. This build also can be risky – you will likely trade damage at times, especially if you’re fighting multiple opponents.