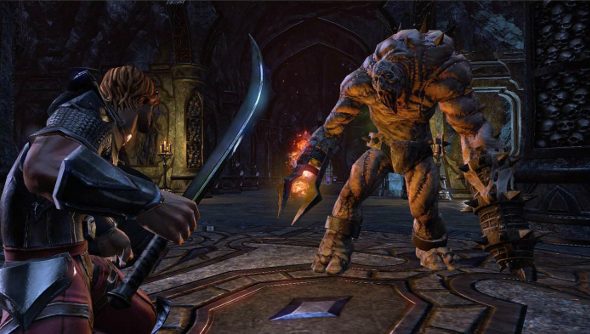 Despite the slew of subscription MMOs shifting to the free-to-play business model, The Elder Scrolls Online will demand a monthly fee, it was revealed earlier today. Where once such a practice wouldn’t have raised a single eyebrow, it’s a bit trickier to justify in the face of countless free titles.

That’s exactly what we got Matt Firor, The Elder Scrolls Online director, to do when we caught up with him at Gamescom. His response? “The reason why we don’t need F2P is we have a huge IP behind this. We’re not that worried about getting people in the door.” Bold words, but will they come back to haunt him?

The Elder Scrolls might be a massive IP with a substantial fanbase, but can it really claim to be larger than Star Wars? Getting people in the door is rarely a problem for these big-name MMOs; it’s keeping them from leaving that’s the issue.

The strength of the Elder Scrolls franchise isn’t in question. I’m not remotely interested in playing an Elder Scrolls title with a horde of other, immersion-breaking, players – but have no doubt about it, I’ll be there at day one simply because it’s another game in the universe that I adore. Whether or not I’ll stay and pay a £8.99/$14.99 a month subscription, well that’s to be decided.

Firor at least acknowledges that it’s about more than simply giving players a compelling reason to visit Tamriel. ZeniMax Online Studios are already working on post-release reasons for players to stick around. “Our teams have already rolled off of launch content, a lot of them, and some are going to polish the launch, and some are driving straight ahead to post-launch.” And Firor is aware that its schedule of new content will be what makes or breaks the MMO.

With the likes of Guild Wars 2 churning out update after update in quick succession, ZeniMax has its work cut out for it, but Firor hints towards a similar cadence of post-launch updates. “Our target is a month to six weeks,” he told us. On top of this, Firor hopes that the 120-150 hours of content per alliance (of which there are three), not including PvP or dungeons, will keep people interested before the teams start churning out the new stuff.

It’s seems like a common sense approach to maintaining subscribers, but Star Trek Online, Guild Wars 2 and many other subscription-free MMOs manage to produce frequent patches, extra missions, new storylines and massive events that are available to all players, not merely the premium lot. It will be interesting to see how ZeniMax differentiates the type of content it will be adding from that of its F2P competitors. 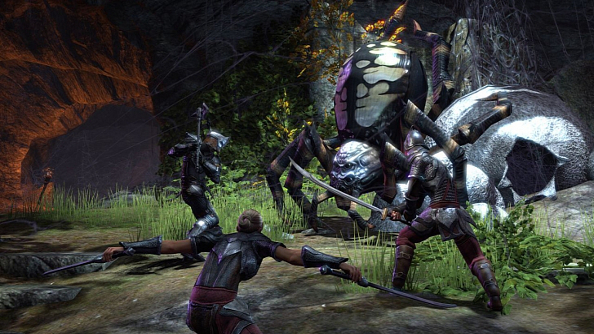 Firor cites the overheads and maintenance of a global IT and support infrastructure as one of the main reasons for needing subscriptions, though this is something all MMO developers must consider. Hopefully we’ll see more robust servers and better customer support result from the subscription fees.

When Firor compares what Elder Scrolls will offer its premium players to free offerings, he brings up issues that F2P titles once had in abundance, yet are not as prevelant now. “Elder Scrolls is about being in a giant world, where you’re exploring, and you go to a dungeon, and you don’t get a paygate in front of you saying you don’t have this dungeon,” Firor says. “Which means, to us, you need to monetise it outside of the game.” While paygates are increasingly less common, some barriers still persist. Certainly, the penny-pinching tactics found in The Old Republic are not desirable.

And there’s something to be said about not being confronted with extra costs while in the game itself. “You go outside the game, you pay your month, you go in the game, and when you’re in the game, you’re in the game,” Firor clarifies. “There’s no real world stuff reaching in to grab you.” Few things break immersion quicker than a game telling you that you can spend cash to unlock chests or get special gear.

Perhaps one of the biggest obstacles for any subscription-based MMO, especially a fantasy one, is the comparisons with World of Warcraft. Even with subscription figures shrinking, it continues to have a mind-bogglingly large userbase, one that The Elder Scrolls Online surely wants a piece off. Firor doesn’t appear to be worried about the comeptition, though. He’s confident that he can stack Elder Scrolls against the competition, like Blizzard. “We’re set up just about as perfectly as you can be. The fantastic IP with the next-gen consoles that are coming out… Blizzard doesn’t do consoles.”

I have no doubt that there are those betting on how long it will take before The Elder Scrolls Online goes the way of so many of its forebearers, but I’m not a gambler, and the persistance of subscriptions in World of Warcraft and EVE still shows that there are some who remain happy to pay.