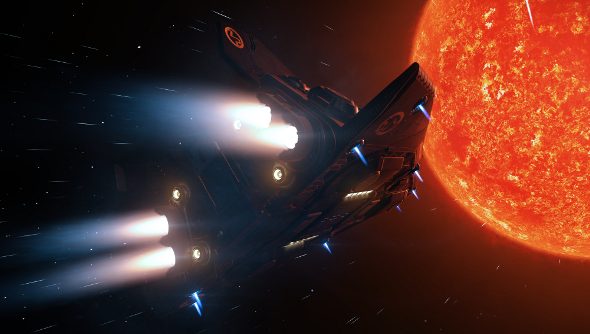 Elite: Dangerous is expanding into new territory soon. Yesterday, Frontier announced that it would be bringing the space sim to Xbox One. Whenever an online game goes multiplatform, there’s always that hopeful question: will there be cross-play? We cornered David Braben, brought out the puppy dog eyes, and asked him that very thing.

“Certainly I like the idea of cross-play,” Braben told us. But liking it doesn’t mean it will be coming to Elite: Dangerous soon, because there’s one big problem looming over cross-play.

“I think the challenges for us, which sort of fights against it, is we’ve also said that we’ll continue to do updates across all platforms, and what we didn’t want was PC updates to be held up for whatever reason, like if there’s a delay on another platform.”

The alternative would be to update the games at different times, but then the PC and console players would be on different versions of the game, unable to work together or compete against each other as they were doing before.

Even though there aren’t concrete plans for cross-play, both versions of the game will share the same world. PC players won’t be able to see or interact with Xbox One players, but the same simulation will be running in both games.

“What we’ve said for definite is that they will be playing in the same world, the same background sim will be effecting the same stock markets and stuff like that. I would like to see cross-play as well. There’s nothing presenting it technically, other than that the worlds might be slightly out of sync.”