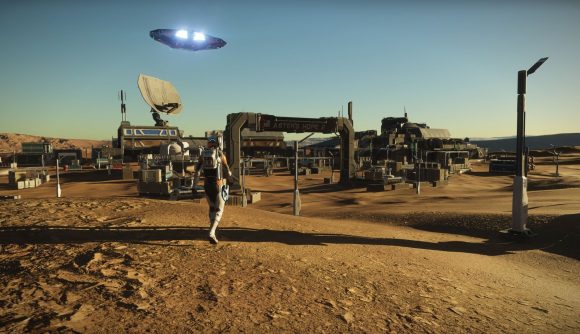 Elite Dangerous: Odyssey is coming soon, and the devs are sharing some of the finer details. In the first of a series of Q’n’A sessions, developer Frontier Developments runs through the settlements coming to the space game, and what it’ll take to raid them.

To get the obvious out of the way: yes, you can kill everyone in any given outpost, but given each belongs to one of the in-game factions, it wouldn’t be the best idea. “Outposts will send for reinforcements that will become progressively tougher, however these are not infinite,” Paul Crowther, the community manager, writes on the official forum. “It would be possibly to kill everyone and then loot the outpost, however the consequences thereafter would be severe.”

Outposts and ports will have missions from a number of factions, some accessible through a mission board, others from NPCs. You probably won’t find many other wanderers in the wilderness, but places of interests are likely to have other characters floating around. Settlements will gradually repopulate from an attack, and they’ll have nine different statuses: active, abandoned, war, damaged, online, online damaged, offline, offline damaged, and conflict zone.

Launching an assault on an outpost isn’t to be taken lightly. Finding a way to power down a location will make the job much easier, and potentially unlock hidden areas. You could just ram your way in using an ORCA, but if the defences are at full capacity, “you may find yourself suddenly without that ORCA.”

On a less violent note, all the current engineers are returning, including a new, unnamed group, to upgrade your suits and equipment.

Elite Dangerous was delayed earlier in the week, from early 2021 to, um, early 2021. The alpha is expected to launch on PC in spring. We’ll keep you updated.