Endless Legend is a fantasy 4X game, floating in the ocean of grand strategy games that have released this year. Cities are built, wars are declared, worlds are conquered – but Amplitude has created has something that stands out; a game that is gorgeous with a world that begs to be explored. It is fat with novel ideas, from its peculiar tactical combat, to its fascinating factions.

I have been a warmonger, a being of pure energy trapped inside a suit of armour, watching my armies sweep across the face of the world like a merciless machine. I have been a peacemaker, a measured dragon, bringing the races together to create something better. And I have been an insectoid monster, feasting on the corpses of my foes and inspiring fear and hatred. I’ve been a busy boy.

Two years ago, Amplitude launched its space 4X game, Endless Space. It was laden with potential, but it was held back by a messy research system, a sterile universe and its slow pace. With Endless Legend, it’s clear that Amplitude has grown as a developer. It takes the potential of the previous game, placing it in a strange sci-fi fantasy world – one that exists within the Endless Space universe – and improves on almost every aspect.

This is immediately apparent when starting up a game for the first time. Endless Legend is stunning – a beautiful, hex-based game with a distinct art style that merges sci-fi and fantasy comfortably. It’s minimalist and clean, strangely evocative of art deco, particularly when it comes to the Broken Lord faction. 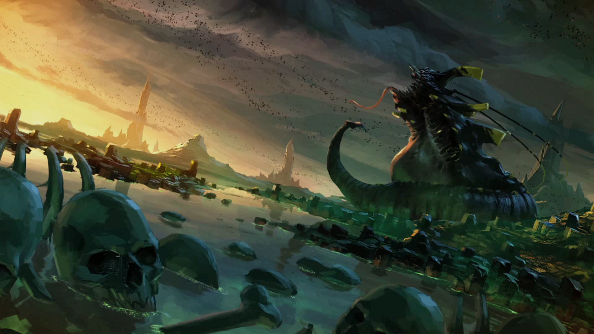 Factions are a high point overall. Where Endless Space’s races lacked any real personality, its successor is not so hampered. Each of the nine factions has a hook that drives games forward.

The aforementioned Broken Lords are a personal favourite. They are a race of honourable warriors and nobles that are starting to fall to darkness. Their physical forms have been left behind, and they exist as pure energy, locked inside gorgeous suits of armour. What sets them apart is their hunger for dust, the currency of Endless Legend. While other factions rely on food for growth, the Broken Lords feed on dust, which completely changes their priorities when it comes to building new cities, researching tech and even healing units.

Each race makes a strong impression, though, thanks to their lore and themes being tied to actual mechanics. The Roving Clans are a nomadic people, so they can move their cities to new locations within provinces they’ve settled, and their strength is in trade, not war. Indeed, they can’t even declare wars. On the other end of the spectrum are the hideous Necrophages. Insectoid beasties that are hated by everyone, they can’t form alliances and are destined to be at war or on the cusp of war with everyone.

Rounding out the denizens of Auriga, the world of Endless Legend, are the minor factions. These tribes sit somewhere between Civilization V’s barbarians and city states. Initially, they are hostile, with small armies of creatures that are analogous to traditional fantasy races like dwarves and demons – all with a spin that makes them feel appropriate for the game’s fiction – wandering around, fighting the larger factions and occasionally besieging cities. They have villages, too, which become the focus of most interactions with these little groups.

These villages can be bribed, conquered or placated through quests. The end result is always the same, though: they join the empire. An assimilated minor faction provides bonuses to its new masters, including additional units.

Quests make up a big part of the game. They range from small missions given by minor factions like “kill our enemies” or “give us X amount of Y resource”. These ones do tend to be on the bland side, but offer diversions and direction. Larger quests tie into the story of each faction. The premise of the Broken Lords questline, for instance, deals with the division within the empire. There are those who wish to keep their humanity and not feed on others like vampires, while the other group is more aggressive and power hungry. Each objective is accompanied by a story arc, fleshing out the already intriguing empires even more.

A sense of constant progress runs throughout the game, and Amplitude has employed several systems to make empires feel like they are consistently growing in logical ways. There’s the aforementioned faction-specific narratives, but it’s research that pushes everything forward the most. It’s also one of the most dramatic improvements when compared to Endless Space.

Research goals are split into eras. Each era adds more buildings, resources and tools, introducing game concepts at a relaxed pace. There are a lot of raw materials that can be dug out of the earth and used to create new weapons or earn money, but the number starts off small, so an empire can be focused. Similarly, trading doesn’t begin straight away. By the time the appropriate knowledge has been unlocked, the chances are that many empires will have already met and developed relationships, making it easier to start trading.

Interactions between the big factions are what you’d expect from a 4X game. Treaties can be made, alliances brokered, trade agreements put forward – it’s mostly notable due to there being a cost involved. Influence must be spent to make deals, but that’s an important resource. Empire-wide boons cost a ridiculous amount of influence and can give factions a serious edge, but maintaining diplomatic relationships is equally important.

The AI is quite reactive, but not very aggressive. It will become terrified if another faction has a bigger army, jealous if they are more powerful, dismissive if they are weaker – but it takes a lot to push them into declaring war. This does mean that when the end game is reached, there’s a good chance that a lot of the factions will still be knocking around unless the player has swallowed them up.

Wars will inevitably kick off at some point, though, and when they do, Endless Legend’s curious combat is put on display. It’s turn-based and tactical, with each battle split up into a maximum of six combat phases, where customisable soldiers and extra-powerful heroes duke it out.

Unlike Fallen Enchantress or Age of Wonders III, two games it does share a number of things with, the fights take place on the map itself, not in a separate battle area. This is brilliant. It means that the information gleaned from the map, where the high ground is, where choke points exist, is all relevant. Planning can begin before the fight even starts. And when it does, things get a little odd.

The planning phase is where units are directed to attack a specific enemy or move to a specific tile. But that doesn’t mean the unit will be able to fulfil those orders. Another unit might get in the way, or the enemy might die before it can be reached. It’s a little hands-off, but that does build this feeling that you’re a general, organising and ordering troops, rather than some omnipotent god dictating their every move. The limitations of this system will no doubt be divisive, but its strength is that it means there’s very little faffing around, and battles play out very quickly. 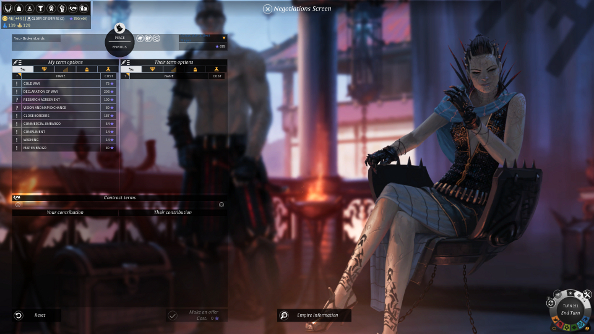 That mix of control and simplicity is a lot better when it comes to city management. Each hex has an allotment of the most basic resources: dust, food, research and industry. And many of them are augmented by special locations that exist within them, like ruins here, a magical tree there. Finally, there are materials that can be mined once specific buildings have been researched and constructed.

When a city is placed, all the hexes immediately around it are activated. You don’t need to do anything to get the basic bonuses, like building farms or factories. When a city grows, more districts can be added, expanding the number of hexes it can take advantage of. There’s no dearth of statistics attached to a city or an empire, and at first that can be a little bewildering, but these numbers can be interacted with in some very simple ways.

The most convenient way to change the output of a city is by using workers. Whenever a city reaches a new level, a new worker is added. They can be added to the production of any of the basic resources. Running low on dust? Add another worker to dust production. Want to unlock a new tech quickly? Make a city dedicated to research by placing all workers on research production. 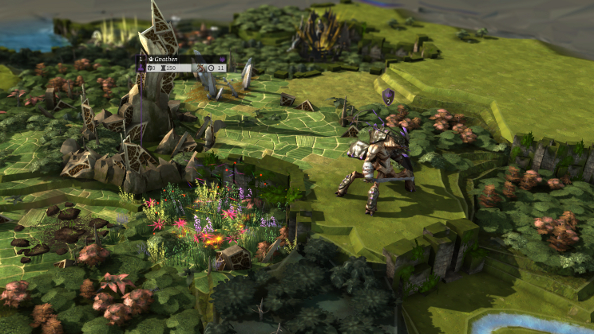 But like everything in Endless Legend, how these systems work can be slightly different depending on what faction you’re playing with. That’s the game’s greatest strength. There are so many different ways to experience it, and starting a fresh campaign with a new race will offer up a lot of different avenues to explore.

Having all of these options, this diversity, does play havoc with the balance. And there are many ways to quickly increase in power and devastate enemies without breaking a sweat. I don’t think balance should be the ultimate goal of every strategy game, though. I’m not certain that there’s a comfortable middle ground, here. The choices and strategy options feel meaningful, and stripping them away in the name of fairness just sounds horribly boring.

Endless Legend combines fantastic fiction with compelling strategy. Underpinning it all is a strong design philosophy that connects the tenets of the 4X genre together seamlessly, while providing a plethora of options without being overwhelming. Even during a time when we’re seeing a lot of 4X offerings, it sets itself apart, promising something different from its contemporaries.