EPOS hasn’t been around long, but the Demant and Sennheiser fledgling is already making waves within the gaming accessory scene. While the fresh-faced company hasn’t got the same level of brand recognition as Sennheiser, products like the EPOS H3 are a testament to the company’s ability to provide great audio solutions within the gaming PC space. The gaming brand’s latest headset entry, the H6Pro, reinforces EPOS’s dedication to peripheral quality. The question is, does the H6Pro do enough to justify its existence and price?

The EPOS H6Pro is far from being the cheapest set of gaming cans on the market, coming in at $179/£149. As a result, the headset’s price tag actually bills it against feature-packed competitors like Logitech’s G733, a wireless, RGB clad setup, a slightly cheaper headset that’s arguably more flashy than EPOS’s wired offering.

That said, simplicity is one of the EPOS H6Pro’s biggest strengths, and its minimalist approach to gaming audio facilitates a reliable and versatile experience that doesn’t rely on fancy features or eye-catching aesthetics.

In a world filled with wireless technology, the EPOS H6Pro remains tethered, with a selection of two different wires. Naturally, this makes the H6Pro quite versatile, as you’ll be able to connect to game consoles via controllers, laptops, mobile handsets, and even DAC devices using the included 3.5mm braided cable, as well as traditional PC audio setups with a secondary lead that splits into the speaker and audio jacks.

Sadly, EPOS’ traditional jack configuration isn’t completely free from sin, as the cable end that connects to the headset is 2.5mm. Basically, this means if you find yourself needing a replacement cable, your options might be limited. Getting hold of these cables isn’t as hard as it used to be, but you won’t be able to use one of your standard 3.5mm aux cables in a pinch. 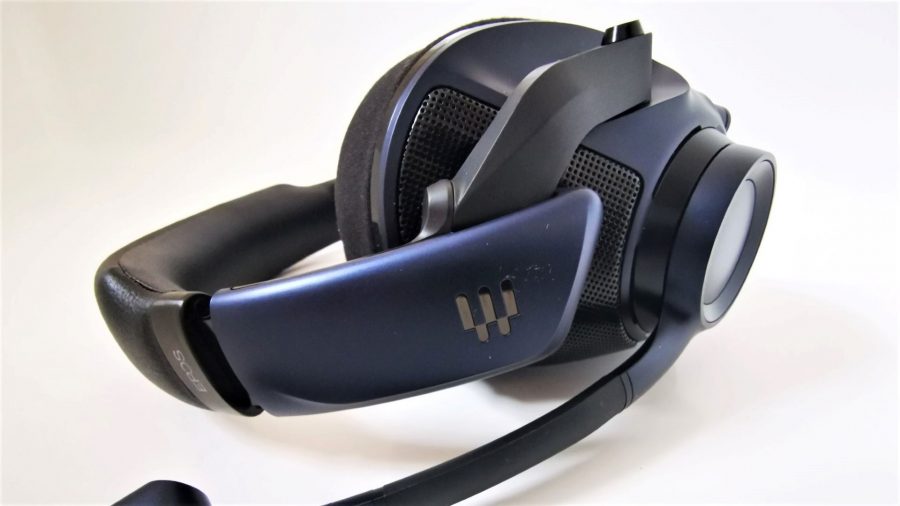 The H6Pro’s drivers produce excellent results, with satisfying bass levels and mids that help everything sound pleasingly natural. Admittedly, you’re not going to get the same audiophile-grade experience that you’d expect from the likes of Sennheiser’s HD 600s, especially since they cost substantially more. Nevertheless, if you’re not a headphone enthusiast, you’ll likely appreciate how balanced the H6Pros are in comparison to other gaming headsets.

EPOS isn’t exactly targeting music lovers with its range, but there are actually closed and open-backed versions of the H6Pro, meaning you can choose between an arguably higher-fidelity audio experience or effective passive noise cancellation without having to settle somewhere in between.

the closed-back H6Pro is perfectly suited to FPS games like Deathloop, especially when tracking Julianna's steps

Comparatively, I found that the closed-back H6Pros is perfectly suited to FPS games like Deathloop, especially when tracking Julianna’s steps, while the open back alternative transforms games like recent indie adventure Sable, with its gorgeous soundtrack by Japanese Breakfast, into a spine-tingling experience. Ultimately, deciding which model to go for comes down to personal preference. Still, I feel like EPOS’ open-back tech gives the H6Pro somewhat of an edge in terms of fidelity.

So we’ve established the H6Pro’s audio output, but what about its capturing capabilities? Well, just like the EPOS H3 we reviewed a few months back, the H6Pro’s flip-to-mute boom mic delivers in terms of quality and balance. Just like before, the mic also has a bidirectional design, meaning your teammates won’t need to listen to the clattering of a mechanical gaming keyboard, or any other background noises occurring in the real world around you.

Naturally, even the most competent headset mic isn’t able to compete with the best gaming microphones. So, If you happen to own a standalone audio capture solution, you’ll be pleased to know that, unlike the EPOS H3’s, the H6Pro’s boom arm is detachable. Essentially, this means if you already have a gaming microphone, you’ll be able to streamline the look of the headset. I’d probably only remove the mic if I was planning to venture outside, but the option essentially means the H6Pro can quickly transform into a traditional pair of headphones.

Let’s face it, dense metals and plastics may often translate to higher build quality, but no one wants to give their head a workout during long gaming sessions. Fortunately, EPOS has a knack for making durable, lightweight headsets, and the H6Pro is no exception. Unlike previous entries, the H6Pro comes with soft fabric earcups that make for an extremely comfortable experience that goes easy on the ears. 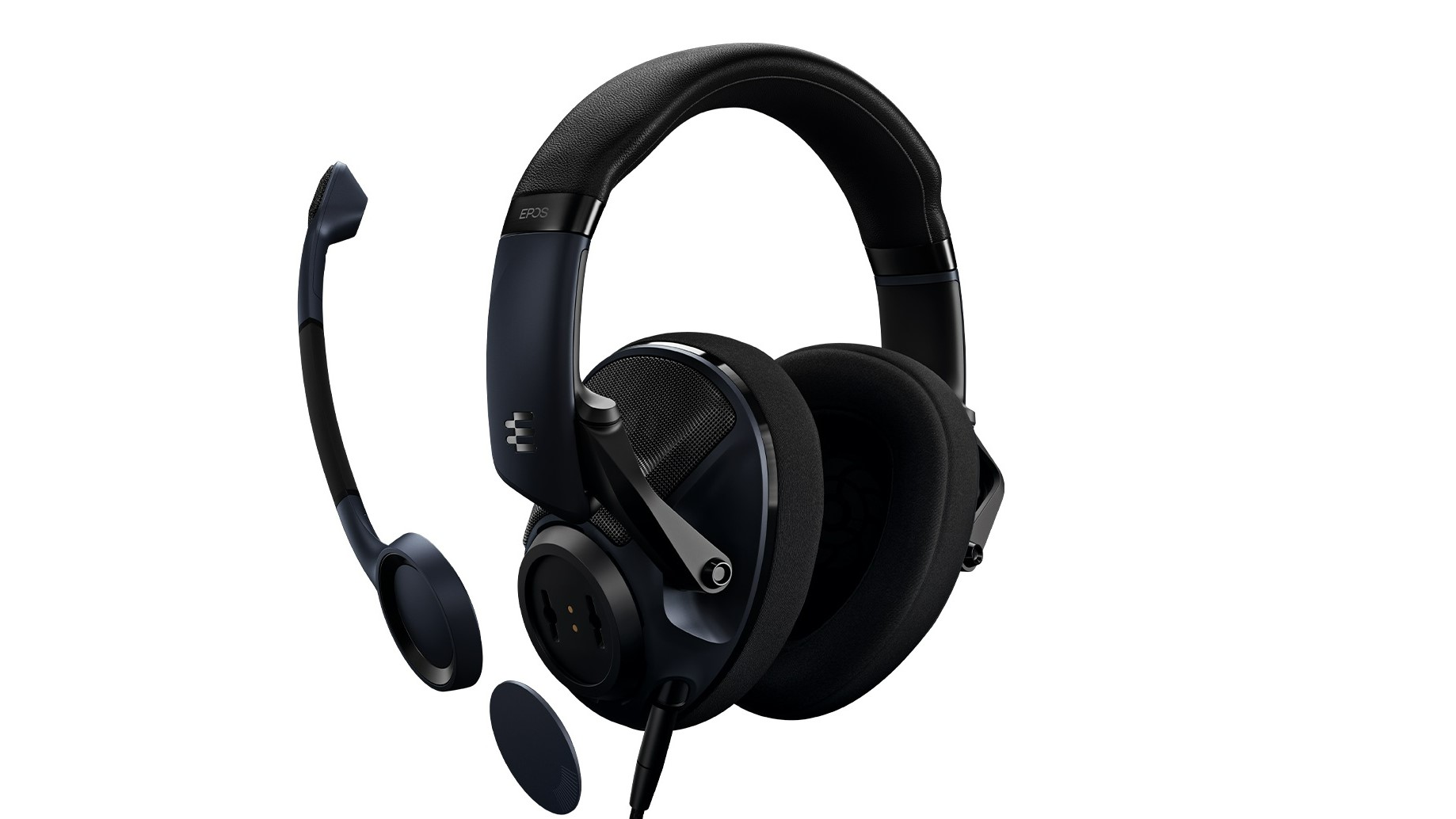 Personally, I’m glad EPOS has seemingly moved away from leatherette cups. While the material can make a product feel more premium, faux leather is prone to deterioration over time. So, while the H6Pro’s fabric earcups aren’t as glamorous, they’re not going to turn to weird, flaky dust after a couple of years of use. I mean, let’s be honest, if you’re going to buy a premium gaming headset, you want it to last for as long as possible.

It’s worth noting that both the open and closed back variants of the H6Pro feel noticeably different to wear. While the closed-back H6Pro headset still feels comfortable, they feel noticeably tighter due to the headset’s intrinsic passive noise reduction. So, if you’re not too fussed about blocking out background noise or bothering anyone else around you with potential sound leakage, you might want to opt for EPOS’s open-back option.

The gaming audio scene is brimming with bold and striking designs, but EPOS has taken a more subtle approach with its latest headset. While most gaming related wearables stick out like a sore thumb, especially when worn outside, the H6Pro’s stealthy aesthetic should help it pass for a regular pair of headphones, especially since its boom mic is now detachable, unlike the EPOS H3. 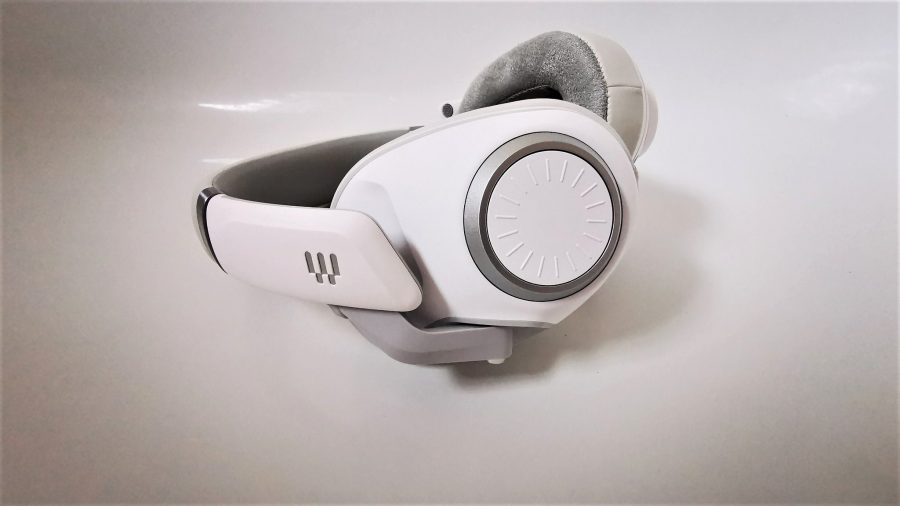 Unfortunately, maintaining a sleek design also compromises functionality, especially when it comes to the headset’s volume wheel. Not only does the disc-shaped dial lack definition, but it also lacks any distinct markings or bumps. Turning the wheel is also a slippery experience; one that’s sure to annoy anyone who likes quick volume control access. Ultimately, this could be avoided by simply implementing a conventional volume dial or knob rather than something that barely looks or feels functional.

Out of the box, the H6Pro isn’t accompanied by USB connectivity or additional software, meaning this headset is truly plug and play across most devices. That said, if you prefer having the ability to amplify and tweak your audio, you’ll be able to use a variety of DAC devices and soundcards, providing they have 3.5mm support. Naturally, EPOS also sells a sound card that features 7.1 surround sound, but it’ll cost you an additional $79.

Listen up: Take a look at the best gaming headsets?

Overall, the EPOS H6Pro is an extremely versatile headset with comfort and simplicity at its core. That’s not to say that the H6Pro is perfect, especially when you consider its price point and design niggles. Yet, the headset’s overall performance and build quality come close to justifying its premium toll, and EPOS seems to be on the path to gaming accessory glory.

If you’re looking for something that’s feature-packed and solely focused on gaming, you might want to consider an alternative best gaming headset. However, if you’ve got a variety of daily audio needs to address, the EPOS H6Pro proves to be a reliable daily driver that covers all bases, rather than homing in on just one.

The EPOS H6Pro is a versatile heavy hitter that boasts great sound quality and compatibility. However, its price point might leave you craving more features.