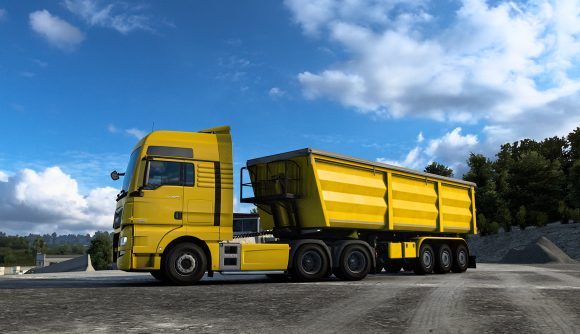 The next major update for American Truck Simulator and Euro Truck Simulator 2 is coming in fast – so fast, in fact, that it’s already here in beta form. The 1.43 open beta is now available in both truck games, giving you a chance to test out the new features while they’re still a little bit buggy. Here’s what to expect.

Both games are getting ownable dumpers. (Or ‘dump trailers’, as every trucker I’ve ever known has called them.) In ATS, you’ll have access to end dumpers, live floor dumpers, and side dumpers, and the latter will be available in B-double, turnpike, and single configurations. In ETS2, you’ll be able to choose between aluminium and steel bodies, short or long lengths, and two or three axles.

You’ll also see – or rather, hear – an interior cabin sound update in both games, which should bring us more realistic sound simulation when driving in first person. An update to fonts will also make sure all the onscreen text looks sharp at every resolution.

Beyond the updates for both games, ETS2 is getting most of the individual changes. Lyon is getting revamped with a new layout, including new roads and landmarks, and some general visual sprucing. Tollgates are getting a gentle rebalance, too, though not every one will be touched in this update.

New viewpoints and special transport routes, as well as new Iberian roads, will also be added to ETS2, but we’ve already looked at those in greater detail in the past.

You can play either beta by going to the game’s properties on Steam, hitting the beta tab, and opting into the public beta for 1.43. If you don’t see it there, just restart Steam.