On the surface, Europa Universalis IV may look like nothing more than a map and a cartographer’s dream, but it has nevertheless exerted a powerful hold on our imaginations and further established grand strategy games as a sub-genre with mainstream appeal.

There are few strategy games in which every single decision has so much impact on the state of the world — a game of such bewildering complexity that it inspires countless inner historians — with so many rules and mechanics that the learning curve stretches into the hundreds of hours. But EU4 is seven years old now, and is showing signs of age. With Crusader Kings 3 taking Steam by storm (you can read our CK3 review or learn some tricks in our CK3 tips guide), now is a good time to start thinking about Europa Universalis 5.

We’ve put together several suggestions that could be incorporated into a sequel. Here are five main things that we would like to see in Europa Universalis 5, whenever Paradox get around to announcing it. Victoria 3 when?

Historically, the tumultuous relationship between the crown and the estates was often the focus of internal conflict throughout much of the period. Even as late as the 18th century, these localised bodies intersected with the life of the citizens in a much more intimate manner than the monarchy or the state.

Speaking of speculation: What is Warhammer 3 going to be like?

So our first suggestion is that the relationship between monarchy and estates should become the central feature of EU5, and the one through which all others should interact. The coring process would be completely reworked to emphasise the challenges of integrating the estates from newly conquered territories into your realm. Autonomy would become a struggle for control between crown and estates. And absolutism would make estates more pliant and easier to core in the late game eras.

Loyal estates would provide plenty of powerful boons such as collateral for loans and local militias to the crown. But highly disloyal estates could also meddle in the domestic affairs of the realm. Foreign countries could likewise interfere with your disloyal or highly autonomous domestic estates by negotiating directly with them, therefore bypassing the crown. An expanded estates system would enable Paradox to simulate state-building and internal politics without dramatically altering the essence of the series. 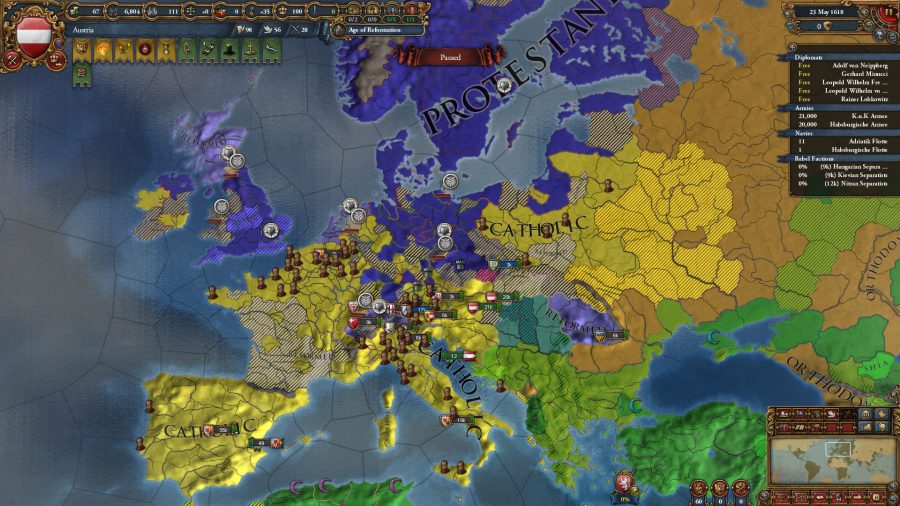 Early modern Europe was a combustible patchwork of different faiths, where even the most obscure disagreements could “ignite revolutions and overturn thrones,” according to the historian Christopher Clark. The current religious system — an odd relic of EU3 — arguably doesn’t capture the full scope of religious strife during this period. So religious minorities should be represented as an actual percentage of your population that acts with a semblance of unity and purpose across your entire realm.

This would force players to make difficult trade-offs. If the player chooses to eradicate a minority religion, then it will threaten widespread strife and disharmony that could plunge the entire nation into chaos. But if the player chooses to tolerate the minority, then they will need to respect their religious customs and devolve power to the local level, which could generate friction with other religions.

If the struggle between religious solidarity and tolerance affected the internal politics of a nation, it could also provide a useful diplomatic instrument of statecraft and diplomacy on the international scene. Particularly devout and pious rulers often expressed solidarity with the plight of oppressed minorities in other realms to win favours with like-minded nations. Therefore, EU5 could allow you to offer religious asylum to oppressed peoples to gain some development at home and some diplomatic credentials abroad. 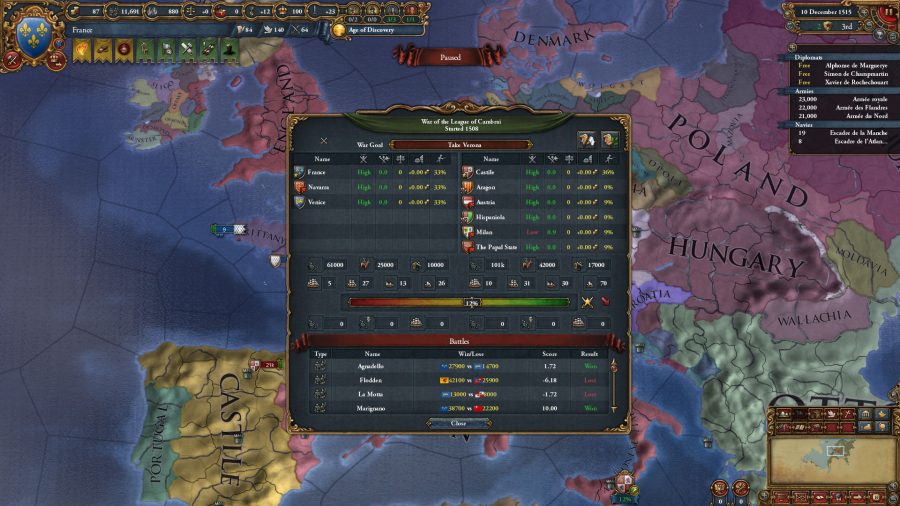 The War of the League of Cambrai, which lasted between 1508 and 1516, was the type of international conflict at which EU4 should excel. What began as an anti-Venetian alliance quickly evolved into a pact between Venice and the Papal States to drive the French from Italy. It ended with France and Venice allied against England, Castile, Austria, and the Pope. But as anyone who has played the 1508 start date knows, the war is impossible to model within the current war system.

To make them more dynamic and interesting to interact with, coalitions should be quick to form, especially against big and threatening nations. They would attract rivals and other opportunistic nations looking for a quick land grab. To make them fairer, however, the game should offer a measure of flexibility and diplomacy — such as the opportunity to buy off wavering coalition members with promises of land or money. Assuming it can be correctly implemented (which is a big ask), wavering nations should be able to switch sides during an ongoing war (something the current system doesn’t allow for).

These changes should make coalitions still very powerful but more volatile and unreliable to work with. Early battlefield setbacks or diplomatic friction between members (especially rivals) could cause a tenuous coalition to unravel quickly as members lose the will to fight. However, friendly coalition members are more willing to support each other until the end. 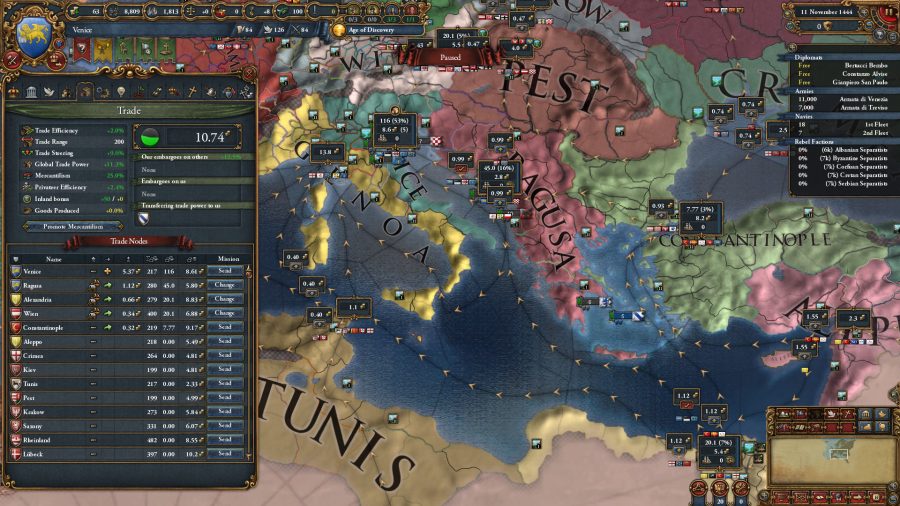 The EU4 timeframe between 1444 and 1820 almost perfectly encapsulates the high watermark of the mercantilist doctrine. This was an era of convergence between states and businesses in which traders and proto-industrialists came to see the ruler as a partner in economic policy who often promoted the values of trade abroad.

This can be modelled by a deeper and more dynamic Victoria-style trade system that allows you to control the flow of individual goods through tariffs and regulations. The other important economic trend in this era was the precipitous growth of a financial system to pay for expensive wars and building projects. In a hypothetical Europa Universalis 5, this could require you to negotiate loans with specific providers of finance.

The espionage-based claims system in EU4 was always a rather imperfect and peculiar approximation of historical reality. Even up to the 18th century, strategic marriage was the preferred instrument of territorial acquisition for any ambitious state. So EU5 should emphasise the critical importance of royal marriages and inheritance for generating claims. Once you have a claim in hand, foreign nations can pledge to support or even oppose it, perhaps sparking an international crisis.

Given the centrality of warfare to the series, Paradox could significantly improve it by introducing new unit types and a supply system similar to Imperator. Nations would also ‘pledge’ a percentage of their armies and income to a war, depending on many factors such as trust. The rest of the army would remain neutral to prevent every conflict from escalating into all-out bitter struggles. Another possible mechanic would allow you to decline to engage in an unfavourable battle. You can either stand and fight or immediately withdraw.

More like this: A guide to grand strategy games

EU4 made interesting strides in the realm of warfare, especially in re-working the significance and impact of forts, but these are strategic (and peace-time) decisions. Imperator showed that there is a way of making grand strategy combat more tactical and interesting without going into the weeds of a Hearts of Iron-style system, and it would be good to see a sequel incorporate these newer ideas.