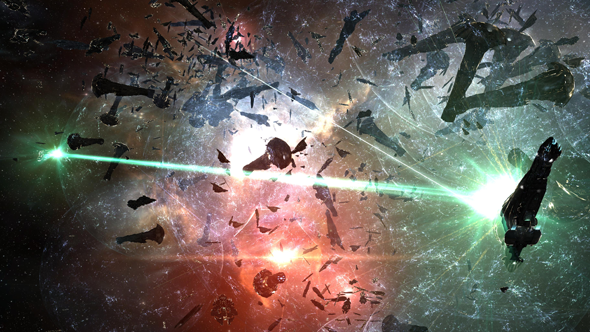 Last night’s battle for 9-4RP2 could have been a $1 million battle. The Imperium launched an attack on the Moneybadger Alliance-held system, one that houses a Keepstar, the largest space station players can build. All told there were more than 250 titans on the battlefield and, according to CCP’s numbers, more than 6,000 pilots in the system.

In the end, though, it was a bit of a damp squib.

When it comes to big Eve battles, it’s the fleet commanders that hold it all together.

The two armies started attacking each other on the evening of 23rd and fought on through the night. As more pilots poured into the system, eventually topping out at more than 6,000, the server’s time dilation kicked into gear, slowing down all activity in the system. Time dilation has been in Eve for years and it’s basically a system to help ease the strain on the game’s servers. Rather than have 6,000 players all playing in real-time, the game slows down, giving the server more time to calculate the outcome of all the different inputs it is receiving.

After more than six hours of attacks, The Imperium armies were unable to destroy the system’s Keepstar and the fleet commanders decided to pull their forces out of the battle, cutting their losses.

Now, that’s the broad strokes of the battle: Moneybadger one, Imperium nil.

There weren’t many major losses on either side. I’ve done some quick calculations based on the biggest ships lost in the system and converted their value into dollars with this handy tool. And we’re looking at around $3,300. Far short of the $1 million battle we were hoping for.

Some players are calling foul play – something you might expect after a big battle – but, oddly, it’s players on the Honeybadger side. They’re pointing to technical problems making it almost impossible for defenders to lose, a problem that robs the battle of risk, making it joyless to take part in.

The problem they’re pointing to is a loophole in the way that the Keepstar citadel takes damage when it’s being assaulted during time dilation.

“Citadels require the attackers to hit a DPS (damage-per-second) threshold in a window of time that scales from tidi,” writes a player called Avree on Reddit. “However, the citadel repairs in a time that doesn’t scale with tidi (time dilation).”

What this meant was that as the game slowed down and it became harder for players to pile damage onto the citadel the station was repairing as though the game was running in real-time, not at the 5% of normal speed that it was for all the players in the system.

This problem was exacerbated because as the battle continued there were the normal problems that occur in multiplayer games on strained servers – players on both sides were “bugging out and people [were] crashing”. The citadel, however, carried on as normal. “Even though the defenders had crashing issues,” Avree continues, “they had all the time in the world to log back in, while the attackers were on a clock that didn’t match the clock of the in-game world.”

Another problem that came with the time not scaling properly was the pressure it put on the attackers. “Because the Citadel repairs in real-time, the attacking force has to maintain DPS over a 6+ hour real-time period in heavy tidi,” Avree explains. “However, should they screw up for just 15 minutes in real-life, or roughly 40 (depending on tidi level) in-game seconds, the Citadel will fully repair.”

“What this means is that The Imperium had to play perfectly for almost 7 hours in real-time, without screwing up for just 15 minutes,” Avree says. “In terms of in-game time, they only needed to mess up for 40 seconds total in order to lose the fight.”

CCP confirmed to us that what Avree talks about in their post on Reddit is how Eve Online currently works, though they weren’t yet able to say whether they would be making changes based on how last night’s battle played out.