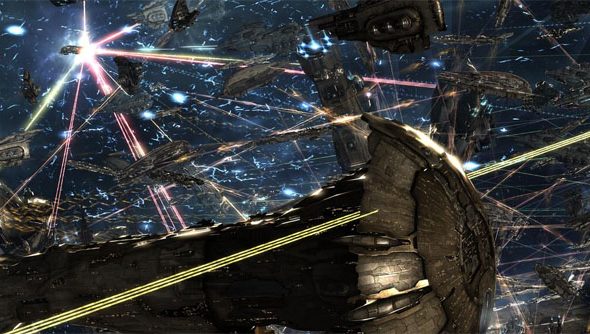 More than 2,200 players are fighting a battle that dwarfs all previous contenders for the largest skirmish in Eve history. Hundreds of thousands of dollars are estimated to have been lost in destroyed ships since yesterday afternoon – and the back-and-forth is expected to continue for several hours yet.

The conflict began by accident, when one corporation failed to pay their station rent – and an entire sector promptly unravelled around them.

Nulli Secunda are an Eve corporation you might remember as one of the victims of in-game espionage in July. Still a major player in the game’s anything-goes lowsec space, they were until yesterday owners of a station which gave them de facto ownership of an entire sector. Nulli allies Pandemic Legion had made sector B-R5RB their home, and stationed many of their most expensive assets there.

Nobody’s yet sure how Nulli forgot to pay the rent. But just after lunch yesterday, they suddenly lost ownership of the system – allowing rival corp RUS to swoop in and take the station for themselves.

Once they’d mustered enough firepower, Pandemic Legion and Nulli returned to liberate their assets – but found themselves faced with not only RUS, but far bigger brother Clusterfuck Coalition. Look over the most dramatic Eve stories of last year, and you’ll find the CFC played an antagonistic role in each.

A pitched battle ensued between CFC, backed up by RUS, and Pandemic Legion, joined by the huge N3 coalition. Fighting began about 2:30pm GMT yesterday, and has continued through the night. More than 70 Titans, some of Eve’s most highly valued ships, have now been destroyed. That number includes The Kan’s Erebus, worth 222 billion ISK – or about $5,500.

A few hours ago, dangerously influential Clusterfuck figurehead The Mittani was confident that his side would emerge victorious. “As vengeance for Asakai goes, it’s somewhat ironic; our forces lost three Titans and seven supercarriers last year in Asakai, and lost the battle,” he told Polygon. “This year we’ve killed 40+ hostile Titans and we have seven more hours of killing before downtime.”

Fighting has spread beyond the borders of B-R5RB, which makes it difficult to calculate costs incurred accurately. But zKillboard have counted 4,286 exploding ships, together worth 9,628,129,832,493 ISK. That’s nearly $284,500 USD lost.

“We’ve already won the fight, what remains is just killing work,” added The Mittani. “When someone breaks and tries to run from the field it becomes a rout.

“They’ve lost the ability to kill any more of our Titans and we’re still killing theirs, as their force quality has degraded. So this is mop-up as they try to extract.”

The fight comes on the first anniversary of the Battle of Asakai, then considered one of the largest in Eve’s 10 years. That battle was started when a lone Goonswarm ally accidentally jumped into enemy space, leading to rapid escalation on both sides.

Eve’s largest skirmishes are frequently triggered by low-level events like these – just enough spark to light the powder kegs of its territorial corp alliances. Have any of you lot had the chance to witness the resulting flames firsthand?