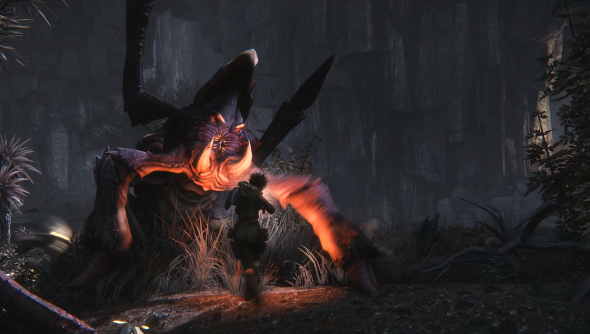 The last time I played Left 4 Dead 2 was just before Christmas. The next? When I see an old friend in a couple of weeks’ time. We won’t know for a long time whether Turtle Rock’s new thing, Evolve, will have the same staying power – but it’ll take its seat in many of our catalogues today.

You’ll know the premise by now: a player-controlled monster must dodge the harpoons and elaborate traps of four human hunters long enough to become the hunter.

You might not know that there’s a monster Evolve patch to download already, or that system requirements for Evolve are surprisingly gentle.

The bit with the eyes was good.

I did wonder whether Evolve would suffer from not having a dedicated co-op mode – something that doesn’t require players to be in competition. After all, Left 4 Dead succeeded as a game for two-to-eight players, not five.

But as it turns out, Evolve does support playing with or against bots. I think that’s going to make the difference for me. How about you?